When he says “nice year for the team,” that’s golfer Jordan Spieth’s nice way of saying “freakin’ amazing year for me.” The 22-year-old former Longhorn’s season earned him a record-breaking $12 million, plus a $10 million bonus for winning the FedEx Cup. So how will Spieth celebrate his $22-million year? “Just dinner at a nice steak house in Atlanta,” his dad told the Dallas Morning News. Hold the humble pie for dessert, Jordan. You deserve some braggin’ rights.

This was a nice year for the team

Cruzin’ — To celebrate his return from campaigning in Iowa, Ted Cruz delivered an impassioned speech criticizing Republican party leadership. But according to the Texas Tribune, his address at the U.S. Capitol Monday might have fallen on deaf ears. Or no ears, rather. In his hour-long speech on the “nearly empty” Senate floor, Cruz set Senate Majority Leader Mitch McConnell and outgoing Speaker of the House John Boehner in his sights for being lapdogs to President Obama (or something like that). He also took fellow Texas U.S. Senator John Cornyn to task for voting down his amendment targeting Planned Parenthood funding and the Iran nuclear deal. So much for Texans closing ranks.

Cruz’s criticism of his own party could be part of a recharged campaign strategy that Texas Monthly‘s Erica Grieder detailed Monday. The presidential candidate is using his hyper-conservative record as a benchmark for other Republicans, showing by comparison that he is the rightful heir to the GOP nomination. Texans will get their chance to see this plan in action when Plano’s Prestonwood Baptist Church hosts the North Texas Presidential Forum on October 18. All Democratic and Republican candidates have been invited to the forum, but as of Monday only Cruz, Arkansas Governor Mike Huckabee, neurosurgeon Ben Carson, and former Pennsylvania Senator Rick Santorum have been confirmed.

Risky Business? — To all of the Texas kids out there who dream of becoming a timing device assembler and adjuster, we’ve got good news and bad news rolled into one stat: there are only 80 people with that job in the entire state. The Houston Chronicle rounded up data from the U.S. Bureau of Labor Statistics to determine the rarest jobs in Texas, but the list only offers the raw numbers,  so it’s unclear if the jobs are unavailable or just overlooked. Some of the sparse occupations are surprising, such as foresters (there’s only 100) and animal scientists (180). Some are not so surprising, like the 100 people who have taken up the noble profession of wood patternmaker. And others have jokes built into them: Texas only has 100 mathematicians.

Cutting Costs — Whole Foods announced Monday that it will cut 1,500 jobs, or 1.6 percent of its workforce, over the next two months. The move, which will allow the store to cut prices for customers, is part of the Austin-based grocery chain’s continued insistence that it is not just a store for people who want/can afford to buy things like kale guacamole. It’s for all of you regular people, too! 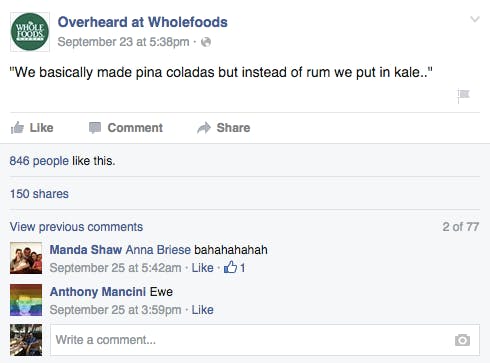 This month the store has been offering 25 cent cups of coffee in the morning and reports that it has discounted some items up to 50 percent. Whole Foods is also planning on opening the first 365 store, essentially Whole Foods lite, next April. The new value chain will focus on lower prices as the market struggles to compete with food giants such as Walmart and Kroger, which have ramped up organic produce selection as demand continues to grow. Job cuts will also free up the store to invest back in technologies, which Whole Foods co-CEO Walter Robb aims to integrate into retail. As Fortune reports: “‘There’s no separation anymore,’ he said. A key example here is the company’s relationship with grocery-delivery service Instacart, which Robb said has been experiencing tremendous month-over-month growth. ‘It’s not a replacement for going to the store,’ Robb said. ‘It’s a partner to going to the store.'”

Cheers! — Let’s give a big hop-hop-hooray! for Texas breweries, which took home a nine gold medals from Denver’s Great American Beer festival last weekend, breaking the previous state record. Breweries and brewpubs from across the state competed against 6,647 other entries, with only 275 receiving recognition.

This is good news for beer lovers across the state. According to the Houston Chronicle, Houston craft beer darlings Saint Arnold and Karbach each took home medals; Fort Worth Rahr & Sons distinguished itself as the only Texas brewery to take home multiple medals; and Austin laid claim to the most award-winning brewers. Toast to all of the winners over at Austin360, and check out Texas Monthly‘s eight must-visit breweries from the October issue.

“2 Men Arrested In Death Of Austin Woman From Fiery Apartment In L.A.”

Halloween Decorations Will Be Removed From a Temple Cemetery