History of the Day

The Lone Star state experienced the worst recorded hurricane in U.S. history on September 7, 1900, in Galveston. This was about fifty years before they started giving storms innocuous names, so it was only known as “The Great Storm.” It was a “Category 4 hurricane, with winds in excess of 130 mph and a storm surge of 15 feet with additional waves on top of the surge,” according to the National Oceanic and Atmospheric Administration. Most of Galveston was destroyed “and an estimated 6,000 to 8,000 people were killed.” The New York Times was on it, even back then: 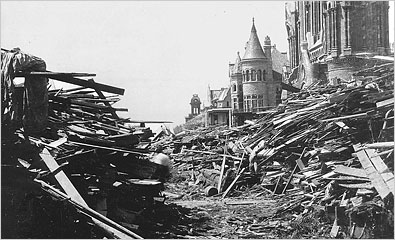 Sunday marked another historical event, too, though one that was arguably more destructive than a storm, at least for American politics and society. It was September 7, 1964 that LBJ, then a candidate for president, debuted the infamous Daisy Ad. Washington D.C.’s company newsletter, Politico, has a story detailing just how this campaign ad came about and why it was so revolutionary:

Complications — ICYMI, gubernatorial candidate Wendy Davis dropped a bombshell just before the weekend, revealing in her soon-to-be-released autobiography that she had two abortions in the nineties. The details of both abortions are pretty devestating—both were due extreme medical situations—as is Davis’s description of her decision. “I could feel her little body tremble violently, as if someone were applying an electric shock to her, and I knew then what I needed to do,” wrote Davis, according to the Associated Press. “She was suffering.” This big reveal certainly appears to be a political move, but that doesn’t make it any less poignant. It also complicates that traditional black-and-white line between pro-lifers and pro-choicers. Exhibit A includes, “Anti-abortion groups, including those that have attacked her candidacy,” who have “expressed sympathy for the tough choice Davis confronted with the second terminated pregnancy …” Exhibit B: Abbott himself responded, according to the San Antonio Express-News, saying, “the unspeakable pain of losing a child is beyond tragic for any parent. As a father, I grieve for the Davis family and for the loss of life.”

An Army Of One (Agency) — The U.S. Border Patrol would prefer those unaccustomed to securing the border stop trying to do so. Or, at least, that’s the general feeling from a delightful Associated Press article that details the headache the Border Patrol has had in trying to manage doing its day job alongside militia members. As the story reports, “Field communication among the various armed agents is fragmented [and] Coordination is challenging among the law enforcement entities alone.” While Border Patrol is experiencing the occasional “friendly fire” with militias just trying to be good citizens, there’s also issue with the National Guard members, whose “deployment so far has barely registered with area residents. Soldiers circulate mostly between their hotels and border observation points.” With no real evidence that the National Guard is doing anything (apart from going hungry), Rio Grande Valley’s mayor, Ruben Villarreal, has gotten “philosophical” about their deployment. “If we want a sense of security in the nation—because it’s not just security for Rio Grande City or Texas, it’s for the nation—we have to understand there are going to be compromises.”

A Republic of Dunces — The children of Texas are behind in their school work, and its not the kids’s fault. The new “math standards had an earthquake-size change over the summer … Much of what is now required had been presented in later grades or not at all. … Math teachers will need to cover a lot more ground this year in grades three through eight to bring students up to grade level,” according to the Dallas Morning News. The DMN has been doing great work demonstrating how the state’s education system has pretty much failed elementary students and still pushes them through the grades. Crunching the numbers, the DMN shows how much of an uphill battle it’ll be for teachers, who, like Sisyphus, are taking one for the team. “‘We don’t have the evidence that [increased teaching] won’t be successful,’ said Whitney Evans, secondary math curriculum coordinator for Plano ISD. ‘It’s just a part of our work, and we just have to respond to it.'” Said one teacher: “We already know we’re going to have to have remediation set up.”

Texas Slight, Texas Slight — That was not a good start to the football season, gentlemen. UT got their cleats handed to the them by BYU, 41-7, a record setting dehorning (it was UT’s “worst home defeat since a 66-3 loss to UCLA in 1997,” reminds KHOU). At least UT and the Dallas Cowboys have something common. Unfortunately, it’s having the word “embarrassing” appear in headlines, thanks to the Cowboys’s 28-17 loss to the 49ers. Other words used in headlines about the cowboys: “implodes,” “brutal,” and “questions.” So resigned to a crappy year, USA Today goes so far as to declare: The Cowboys are better off being this bad all season. Who’s to blame? The away-team crowd, apparently (and Jerry Jones). The good news: Baylor (70-6 win) and A&M (73-3 win) are great, butt-kicking football teams. The bad news: so far, it’s only against really bad teams. One silver lining: A&M fans scream so loud, apparently even the East-Coasters at the New York Times can hear them.

True Detective: El Paso — El Paso Times reporter Diana Washington Valdez delivered a juicy story over the weekend. “Two El Paso Electric Co. workmen … found the body of a man who appeared to have been burned and dismembered.” Don’t worry, it gets worse. “The utility workers said the man appeared to have been gagged and appeared to have had his hands tied behind his back. One of the utility workers said that he first thought the body was that of a mannequin until he got a closer look.” And worse: “In the basement, an arrow was painted on a wall, pointing to where the body was found. The words ‘Death A Waits’ also were painted on a wall.” Apart from the killer’s apparent STARR-educated, sixth-grader’s grasp of English (“awaits” is one word), authorities have proffered few additional details.

The Texas Construction Industry Knows How to Build a Sturdy Racket

Governor Perry Is Cramming For the Presidential Election

Thanks To Recent Shootout, La Joya Is Building Its Armory