It was a crammed Monday morning, but I had been following updates from the American League Divisional Series game between the Astros and the Kansas City Royals online as I got my work done. Around three o’clock, I went to the Whole Foods barbecue counter for some lunch, knowing that they’d have the end of game four on the TV. I settled in for some moist brisket, mac and cheese, and an Astros win.

Or at least it was looking that way. The Astros had a commanding 6-2 lead and fans were riding high. They were six outs away from clinching an appearance in the American League Championship Series to play for the pennant against their newly minted rival the Rangers. Things were so upbeat, in fact, that Governor Greg Abbott’s official news account, one of his two verified Twitter profiles, congratulated the team on taking the series. 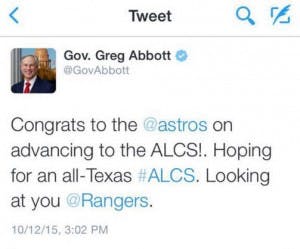 I sat down with my food (side note: the barbecue at the Whole Foods flagship store in Austin is pretty competitive) near an eight-year-old boy there with his dad, both Astros fans. The boy asked questions, all the naïveté of youth on full display: “Why do they wear blue?” he asked. “They’re called the Royals. Royal is a shade of blue,” his dad responded.

I immediately made up a full backstory for the dad and his son—the dad, a lifelong Astros fan, had taken the day off of work to share the experience of playoff baseball with his boy, who was only just beginning to share his enthusiasm for the game. The boy, watched eagerly, cared so deeply, because he saw how much joy a winning Astros team brought to his dad. They’d told the boy’s mother they’d be eating lunch at Whole Foods—she didn’t want him to eat fried crap at a sports bar, after all—and then the dad snuck him off to the barbecue counter instead of loading him up on quinoa.

Maybe the governor had jinxed the team. Or maybe it was just bad luck—or bad pitching—that led Tony Sipp to load up the bases with no outs. The Astros were still up by four with two innings to play, but when Royals center fielder Lorenzo Cain stepped to the plate and hit a grounder to left field, things got bad. Alex Rios scored, and everybody advanced—the bases remained loaded, and the next batter did the same. Then things got even uglier: A fielding error from Carlos Correa brought two more runs in, and suddenly the Astros were looking at a tie game.

The little boy at the counter got very nervous. “They’re still going to win, though, right?” he asked his dad. His dad, with too much integrity to lie to his son, told him the truth: “I don’t know.” When Correa bumbled the ball and let it roll into the outfield—bringing Cain and Ben Zobrist home—he didn’t understand. “Why didn’t he catch it?” he asked. “Sometimes you just don’t catch it,” his dad replied.

That’s baseball, of course. More than any other sport, impossible comebacks are possible in a game that’s not ruled by time. By the end of the inning, the Royals had taken a one-run lead, going up 7-6 by the time Luke Gregerson, brought in to relieve an overmatched Tony Sipp, finally managed to escape the eighth.

There’ve been a lot of heartbreaking innings in Astros history, of course. The 1980 National League Championship Series—long before the team jumped to the American League—saw the team blow two eighth-inning leads against the Phillies, losing the final two games in the series in extra innings despite impressive comebacks. The 1986 team saw a ninth inning lead turn into a sixteenth inning loss in the NLCS, sending the Mets to the World Series. And, of course, the 2005 team saw more than its fair share of bummers, losing the World Series to the White Sox in four games, two of which featured the Astros giving up leads, only to tie the game in the ninth, before losing heartbreakers.

Astros historians can debate where Monday’s collapse fits into that mix—but if you’re an eight-year-old boy, the swing from “we’re gonna win” to “how did we lose” is a uniquely devastating experience.

The boy and his dad left before the game ended; I decided to read it as an act of kindness on the dad’s part, sparing him from having to witness the futility of the next inning-and-a-half firsthand. Maybe they turned on the radio on the drive home and listened as the Astros sent three up and three down in the bottom of the eighth, gave up two more runs in the top of the ninth, and closed out the game as losers, 9-6.

Greg Abbott, meanwhile, told everyone to unfollow whatever intern or staffer was responsible for what will go down as a legendary jinx.

Now, of course, all eyes are on game five, which brings the Astros and the Royals back to Kansas City. It’s rough stuff to lose the way the Astros did, so the true measure of the team will be taken on Wednesday: Does the young team have it in them to bounce back, or is there a heartbreak hangover hovering over them? The Rangers lost Wednesday, too, but they were down 7-1 by the fourth inning, which is almost easier to overcome—it’s a bad loss, but it doesn’t rob you of hope.

The hopes of whoever handles social media at @GovAbbott for an all-Texas ALCS are still alive—or at least until Wednesday night. The hopes of the little boy from Whole Foods, probably a little less so. But, again, that’s baseball—especially in Houston—where heartbreak is just part of the game.