Back in 2012, the Internet discovered the existence of the Donut Taco Palace, which is in Austin and exactly what it sounds like. Buzzfeed visited. Shinyribs recorded a song about it. It became a meme. Mostly, people thought the concept of a Donut Taco Palace was funny because many people outside of Texas are unaware that donuts and tacos are both delicious breakfast foods, and deserve to be served in a palace.

In Austin, though, Donut Taco Palace is known less for its name and more for its unique contribution to the pastry arts: the Longhorn, a donut shaped in the familiar pinkie-and-index-finger-up formation of the University of Texas’s “hook ’em.”

The Longhorn donut has been a signature of Donut Taco Palace since 2012. Texas Monthly spoke to co-owner Pisey Seng about her creation of the confection in 2014, and she explained that her hand-shaped donuts come in a variety of forms: a peace sign, a “hang loose” symbol, the three-fingered “I love you” salute, and, to the chagrin of her UT fan patrons, an Aggie “gig ’em” thumbs up.

The donuts, which sell for a reasonable $2 a piece, are suddenly giving Seng some legal trouble. Years after the donuts attracted attention from sports media, they’ve suddenly also caught the eye of UT’s lawyers. As the Austin American-Statesman reported over the weekend, Seng received a cease-and-desist letter from the university in July, citing the school’s trademark.

“While the University appreciates Donut Taco Palace’s enthusiasm, UT is understandably concerned about your use of the LONGHORN Marks in this manner,” the letter said. “We suspect that you were not aware of the University’s trademark rights when you started selling ‘Longhorn Donuts.’ We trust that, now that these rights have been brought to your attention, you will take the appropriate steps to discontinue sales of the ‘Longhorn Donuts’ and refrain from any other uses of the University’s marks.”

Craig Westemeier, senior associate athletics director for trademark licensing at the University of Texas, said in an email that the university receives tips on trademark violations from a variety of sources including alums, fans, staff, faculty, students and anonymous emails. He said the UT brand must be monitored and protected in order to maintain its integrity and value.

“It is an integral part of the trademark law that we protect to regulate the use of and educate the public regarding our rights in these marks. That is our responsibility as a trademark owner,” he said. “We cannot permit the use of our trademarks without providing approval, review and quality control of the item being produced. An inferior product or one that is not properly vetted could hurt the University’s reputation.”

UT has been protective of the “hook ’em” sign, arguing in the past that the university owns the common law rights to the hand symbol dating back to 1955. (In 2013, it brought legal action against a British man who sold t-shirts with the symbol, even though his usage of it was related to heavy metal music. The suit was dismissed after the man dropped his trademark claim for the symbol.)

Putting the index and pinkie finger out on your hand is a symbol that pre-dates the University of Texas’s use in 1955, as you might expect. The manu cornuto devil horns have been in use in Italy and other Mediterranean countries for centuries as a semi-offensive gesture (if it’s pointed upward) or a superstition (if it’s pointed down), and it came to heavy metal culture entirely independent of UT football. John Lennon flashed it on the cover of Yellow Submarine, and Gene Simmons displayed it on the album art for KISS’s 1977 Love Gun. It’s doubtful that the Beatles or KISS had any particular allegiance to the University of Texas, nor did Ronnie James Dio, who began popularizing the symbol when he took over as lead singer for Black Sabbath in 1979. 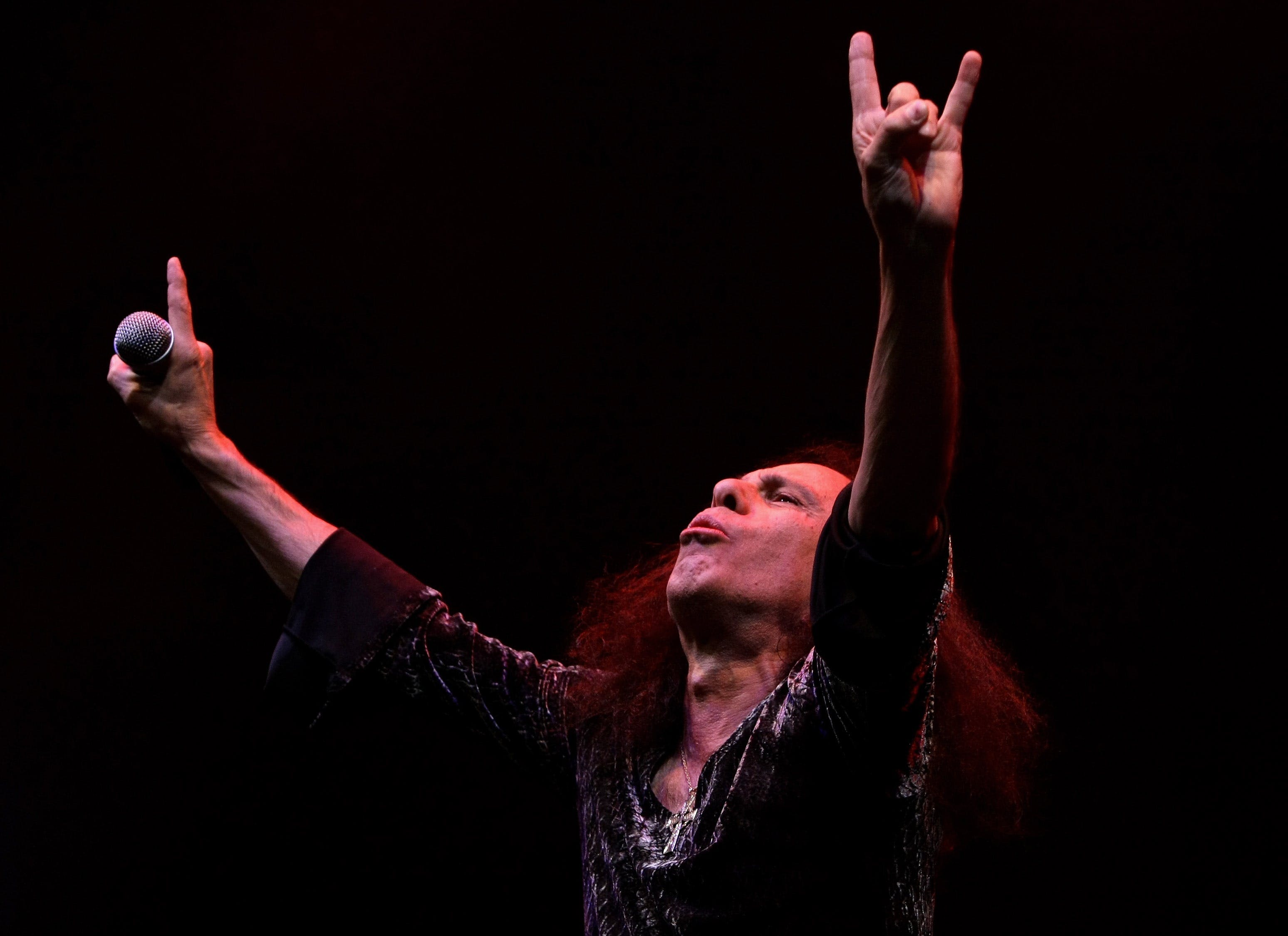 For those who don’t know much or care about UT football, Dio has long been credited as the originator of the symbol. In 2001, he was interviewed by the website Metal-Rules.com about the devil horns symbol—which, among metal fans, had come to mean “Hail Satan”—and he denied credit for inventing the idea of extending your pinkie and index finger, noting the Italian superstition. He did, however, identify the idea of a sort of common law trademark behind the image, even if he seemed to intuitively understand that taking legal action around it would be ridiculous.

I doubt very much if I would be the first one who ever did that. That’s like saying I invented the wheel, I’m sure someone did that at some other point. I think you’d have to say that I made it fashionable. I used it so much and all the time and it had become my trademark until the Britney Spears audience decided to do it as well. So it kind of lost its meaning with that. But it was…. I was in Sabbath at the time. It was a symbol that I thought was reflective of what that band was supposed to be all about. It’s NOT the devil’s sign like we’re here with the devil. It’s an Italian thing I got from my Grandmother called the “Malocchio.” It’s to ward off the Evil Eye or to give the Evil Eye, depending on which way you do it. It’s just a symbol but it had magical incantations and attitudes to it and I felt it worked very well with Sabbath. So I became very noted for it and then everybody else started to pick up on it and away it went. But I would never say I take credit for being the first to do it. I say because I did it so much that it became the symbol of rock and roll of some kind.

That’s probably a reasonable way to approach that kind of common law trademark—it was Dio’s, but it also belonged to the world, and he could recognize that. But Dio had no financial stake in the devil horn as a symbol, while UT sells all sorts of “hook ’em”-themed merchandise. If anybody can just go out and sell their own stuff with “hook ’em” on it, that’d be trouble for the university’s bottom line.

Still, questions linger. Selling t-shirts in burnt orange with the “hook ’em” symbol reasonably infringes on the ability of the school to make money. That would be likely to confuse potential consumers who expect that, if it’s orange, it’s being sold near a football game, and it’s a piece of apparel that we commonly associate with sports merchandise, it’s probably got the UT stamp of approval on it. Donuts, on the other hand, are not really within the purview of University of Texas athletics, which copyright attorney J.T. Morris pointed out in the Statesman might provide Donut Taco Palace with a way out. “Would a consumer see the doughnut with the Hook ‘Em sign and confuse it with the Texas Hook ‘Em sign to the point the consumer would think those doughnuts were affiliated with the university or that the university is endorsing those Hook ‘Em-shaped doughnuts?” he asked.

Still, a judge could decide that—or Seng could just decide that trying to battle the University of Texas’s lawyers would be a real challenge for the owner of a donut/taco shop, and acquiesce to UT’s demands to avoid the legal fight. Currently, the donut is being sold as “El Toro” on Saturdays and Sundays. It’s not clear if even re-branding donuts shaped like a hand with the pinkie and index finger extended as, say, “Ronnie James Dio-nuts” or “Hail Satan” would satisfy the lawyers, or if the university would continue to throw its legal weight in her direction to protect what it believes is a common law trademark on extending certain fingers of your hand.