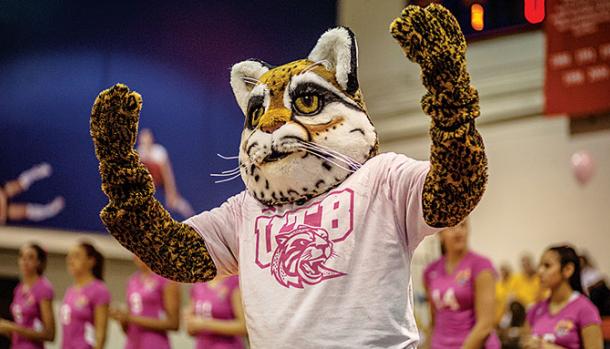 The ongoing saga of the UT-RGV mascot reached its climax yesterday afternoon, when—in a presentation before the University of Texas Board of Regents—school president Guy Bailey made his formal recommendation for the new school’s colors and mascot.

The colors he recommended are navy blue and green, the colors of the current UT-Brownsville and UT-Pan American campuses which are being smooshed together to make up UT-RGV—along, of course, with the required UT system orange. And the mascot he recommended? The Vaquero.

If “Vaquero” sounds unfamiliar to you, that’s because the name wasn’t among the list of initial candidates to replace Bucky the Bronc and Ozzie the Ocelot. That list was greeted with a collective shrug from most of the stakeholders in the community (when I reported on the debate from the Valley, Edinburg city councilmember J.R. Betancort told me with refreshing candor that “it was horrible,” while even the students at UT-Brownsville who participated in generating the list were lukewarm in their admiration for the possibilities), and when it came time for the school to hold a formal survey to guide the decision-making process, “Bears,” “Baracudas,” and “Bull Snakes”—along with six of the other ten names on the list—were nowhere to be found.

Instead, the UT-RGV mascot options were: “Phoenix,” (which did appear on the original list), “Storm,” “Green Jays,” “Vaqueros,” and the ever-popular “None Of The Above.”

The survey results were overwhelming in favor of “None Of The Above,” which—given how vocal supporters of the longstanding mascot at UT-Pan Am, Bucky the Bronc, have been—isn’t exactly a surprise. According to the survey results, “None Of The Above” scored a whopping 45% of the vote, while “Phoenix” came in second place with 21%. “Vaquero” was next in line, with 14% of the vote.

But “None Of The Above” as a vote to save Bucky wasn’t really an option—the issue was too contentious, and the argument from stakeholders in Brownsville that they’d feel marginalized if they were to be told that they’d be Broncs at the new school was hard to dispute. And while the “keep Bucky” crowd turned out to vote in the survey, they weren’t exactly an overwhelming majority. Thus, a new name: Enter the Vaquero.

In the 24 hours since Bailey recommended the Vaquero (which the Regents have yet to approve, but the expectation is that they will accept his recommendation with no changes as early as today), that name has suddenly become very contentious, as well. Much of this is the result of agitating from Alex Del Barrio, a Houston sports radio host and UTPA graduate who’s spearheaded the pro-Bucky movement from its inception. Del Barrio started a Change.org petition immediately after the announcement, lobbying the Regents to reject Bailey’s recommendation, which quickly generated over 5,000 signatures. Pro-Bucky state rep. Terry Canales (because in the Valley right now, there are “pro-Bucky” and “anti-Bucky” politicians) drafted a letter to the Regents opposing the name, telling Action 4 News that the new name will “turn into a joke.”

“The name ‘Vaqueros’ I don’t think embodies the spirit or the people that we are,” Canales said. “We live in the United States. I’m very proud of our Mexican heritage and being a Mexican American. I don’t think the name does the future of the school justice.”

As arguments against the Vaquero go, “We live in the United States” isn’t the strongest one there is: For one, a lot of people in the United States speak Spanish; for another, San Diego (where the UCSD “Toreros” play) and Santa Barbara (home of the UCSB “Gauchos”) are both convincingly in the U.S.

There are other arguments, as well: Del Barrio’s petition asserts that the nickname is a racist stereotype (“You may not believe that this is a sensitive issue to Latinos in the RGV, but it already is,” he says) and sexist, to boot (“the word Vaquero is male.. It refers to a male.. it is the  Spanish equivalent of Cowboy. How this slipped Guy Bailey’s mind [sic], but what will our women’s teams referred as?”).

There’s no disputing that “Vaquero” is gendered—women’s teams, presumably, will be the “Vaqueras”—but that is a risk that comes with using a name from a language with gendered nouns. Still, the argument that having to use a different name for women’s athletics than the main name further marginalizes them is certainly legitimate.

The charges that the name is racist is a bit tougher to parse. Some of the grousing about the name on Twitter appears racially tinged in the opposite direction (“I can’t even pronounce vaqueros,” “‘Los Vaqueros del Rio Grande’ doesn’t sound very welcoming to white, black & Asian people”); others maintain that “Vaqueros” is the Valley equivalent to “Redskins.” Can the name alienate non-Latino students and Latino students for the same exact reason?

Potentially, sure, but given that most of the opposition to “Vaqueros” gathering online seems to be coming from Bucky loyalists, we strongly suspect those same forces would have found an argument against any other name that Bailey selected. “Storm” is disrespectful to the fact that storms are destructive to people sometimes; “Phoenix” is grammatically unsound (while “Phoenices” is ugly); “Green Jay” isn’t even a tough-guy bird. (When I asked Betancourt if he’d have accepted a name like “Green Jay” shortly before the survey went online, he shook his head.)

In other words, it’s worth having a conversation about Vaquero as a name, but it’s hard to feel like the one that’s occurring right now is entirely honest, given that most of the vocal opposition comes from people for whom only one name would have been acceptable. Vaquero might be a poor choice—but right now, the arguments against it seem to be motivated more by a desire to preserve Bucky the Bronc than out of sincere engagement with the Vaquero.

That’s to be expected, given how contentious this has become. It’s still possible, albeit highly unlikely, that the Regents are going to override Bailey in one of his first major decisions as UT-RGV President, but most likely, there’ll be years to come during which “Vaquero” can be debated in the Valley.