When it was revealed earlier this month that the American Phoenix Foundation—a conservative media nonprofit—had used hidden cameras to make hundreds of hours of video footage of Texas lawmakers, the expectations for what would appear on those tapes were high. The footage was later promised to Breitbart Texas, whose managing director, Brandon Darby, further teased the salaciousness of the material:

“Some of it is very newsworthy,” Darby said in a telephone interview. […]

“Just to speak in general terms, I do think that if somebody sells themselves to the people as being a big family values guy and a family guy, I think there is a problem coming to Austin and having sex with people who are not their wives and sometimes in public places and I think that’s a bit of a problem,” Darby said.

Darby initially declared that the site would be holding off on releasing any of the footage until after the end of the legislative session, on June 1, and was clear that he hadn’t yet reviewed it in full—but he also spoke of “very newsworthy” sex tapes starring Texas lawmakers and teased the footage on Twitter with the hashtag #LegeGoneWild. But upon further review, it’s apparently less newsworthy than initially believed. As the Texas Tribune reported yesterday, Breitbart Texas had opted to get out of the hidden camera footage game.

Undercover video of Texas lawmakers made by the American Phoenix Foundation will not be published by Breitbart Texas after the legislative session ends, according to the conservative news organization’s managing director, Brandon Darby.

“At this time, I am not publishing it, correct,” Darby told The Texas Tribune on Tuesday.

Darby did not elaborate on why he has changed his mind about the supposed 836 hours of video the American Phoenix group has been made of lawmakers since the group began filming in and around the Texas Capitol last December.

Asked Tuesday if he stood still by [his “very newsworthy”] assessment, Darby said: “I really think my initial description still stands. But I think it’s best for them to talk about their own footage.”

The backtracking from Breitbart, after Darby’s initial enthusiasm, leads to the obvious question: What exactly is on those tapes? It’s safe to say that there’s probably some sex stuff there, whether it’s lawmakers hitting on women around the Capitol—something that should surprise no one who has observed the Legislature for more than five minutes—or even covertly obtained footage of male representatives “having sex with people who are not their wives and sometimes in public places,” as Darby claimed in early May. Beyond that, though, it seems likely that the American Phoenix Foundation’s eight hundred hours of footage doesn’t hold much else.

The larger question around all of this involves the ethics of hidden-camera recording. Certainly, such tactics like this can be an effective way of exposing corruption among politicians, or even of revealing beliefs and opinions about their constituents that they may not reveal in public statements—think Mitt Romney’s “47 percent” speech—but it’s a line that’s best walked with caution: if you’re going to surveil people and then release the footage, you should probably have something worth revealing.

But a video released last week by Representative Sarah Davis (R-Houston) gives a clearer view of what the process of obtaining this footage looks like (video still above). Davis turned the camera around on the American Phoenix videographer who was following her, confronting him for trailing her closely and accusing him of making her feel unsafe. “I need you to stay away from me,” Davis says. “I am a woman and you are a man dressed in black following me everywhere I go. It is really inappropriate, and quite frankly, it scares me, so please leave me alone.”

There’s a difference between recording someone abusing their power, engaging in rank hypocrisy, or making statements that their constituents would find offensive and following someone around all day in the hope that they might be baited into saying or doing something that’ll make for a salacious image. It’s unclear at the moment exactly how many of the eight hundred hours the American Phoenix Foundation has obtained involves people saying to them, “Leave me the hell alone.” But based on what we’ve seen from Davis, and from the fact that Darby opted out of being involved, it seems likely that there’s more of that than there is of lawmakers compromising the integrity of their public service. 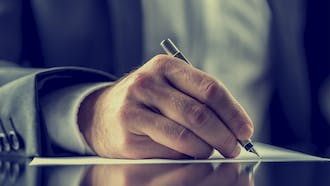 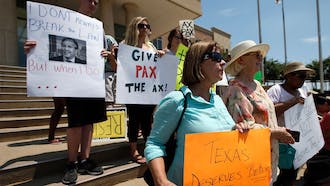 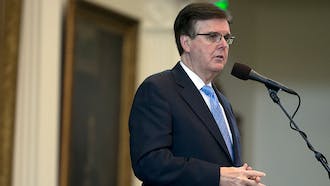 Dan Patrick Is Eyeing a Promotion