Spring is in the air. The sun is shining, the birds are singing. More important, the sound of bats connecting with fastballs begins to fill the ears of baseball fans, and the smell of peanuts, Cracker Jack, and two-foot long hot dogs baked inside of tamales, then topped with Texas chili, nacho cheese, and sour cream wafts gently from the Rangers ballpark.

That last bit might be a newer tradition, but the folks who create the food served at Globe Life Park take it very seriously. The tamale-dog hybrid—dubbed “The M.V.T.” for “Most Valuable Tamale”—is one of the additions to this year’s heart-stopping menu. (Note the other hot dogs in the background for scale.) 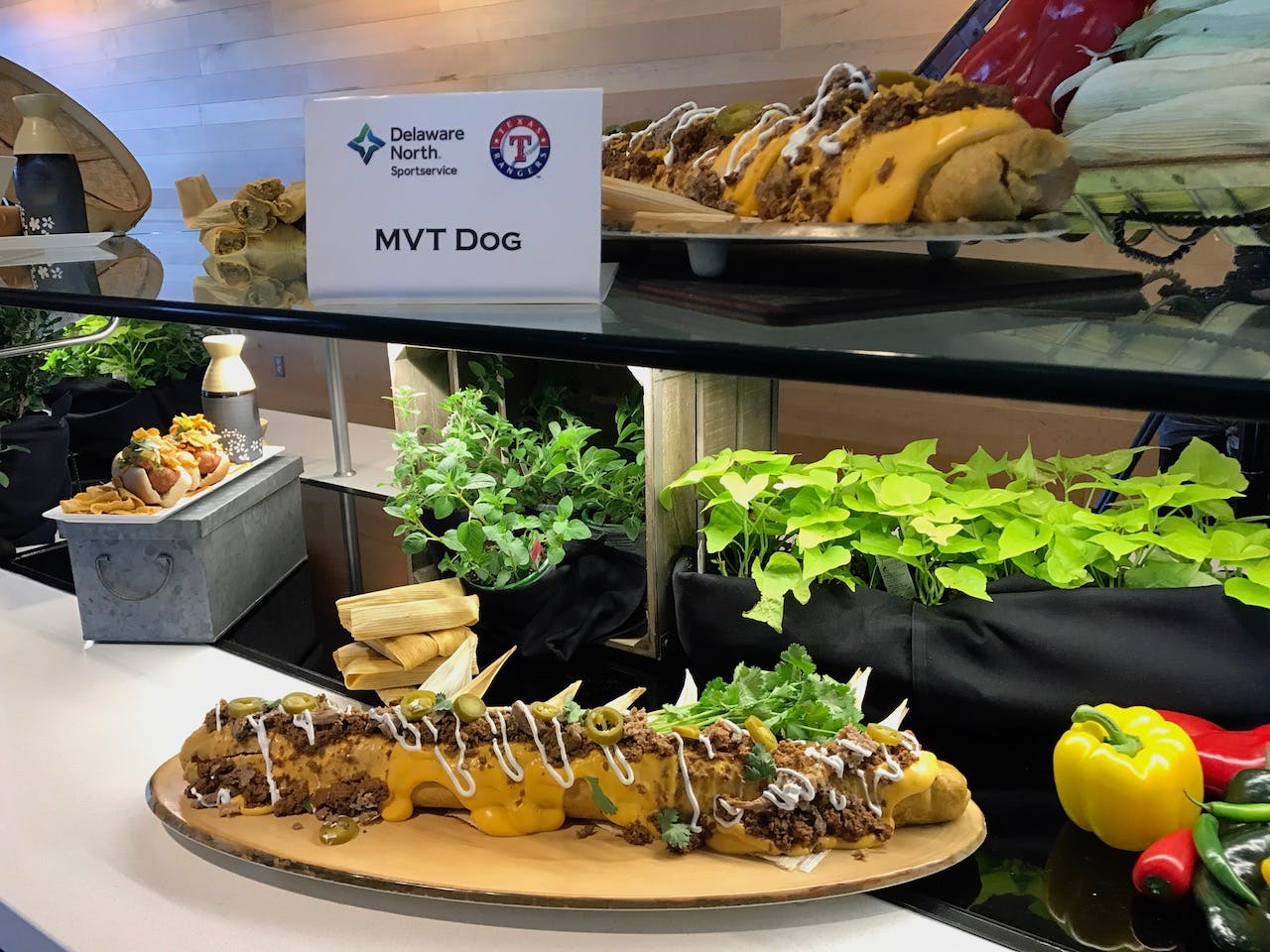 But there are also Texas Snow Balls, made with a core of shredded brisket that is then tossed in barbecue sauce, coated in funnel cake dough, deep-fried, and covered in powdered sugar … 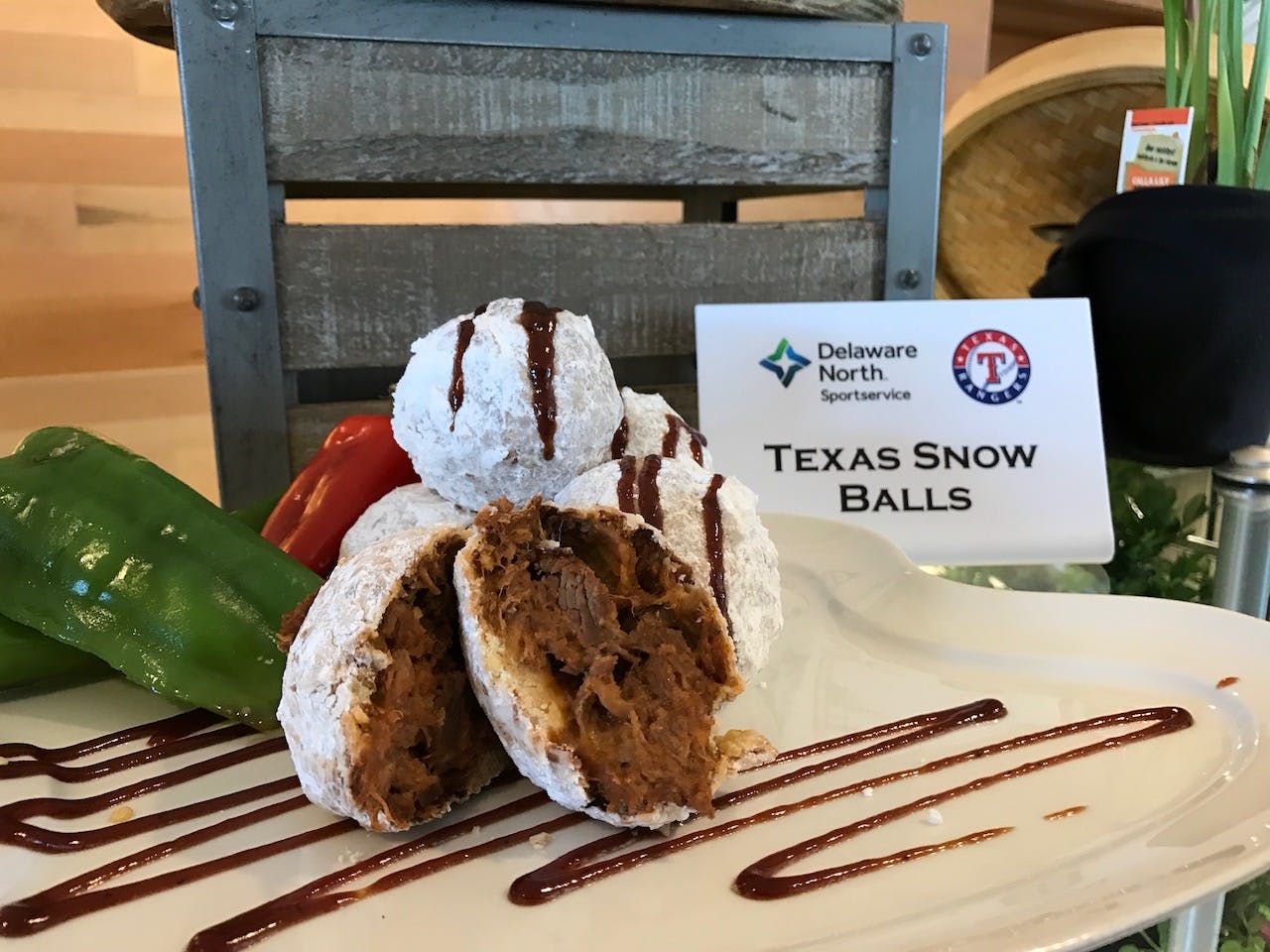 … the N.E.Q. (Never Ever Quit) Sandwich, which is kind of like a cheesesteak, but with queso, mozzarella sticks, onion rings, and fried jalapeños on top … 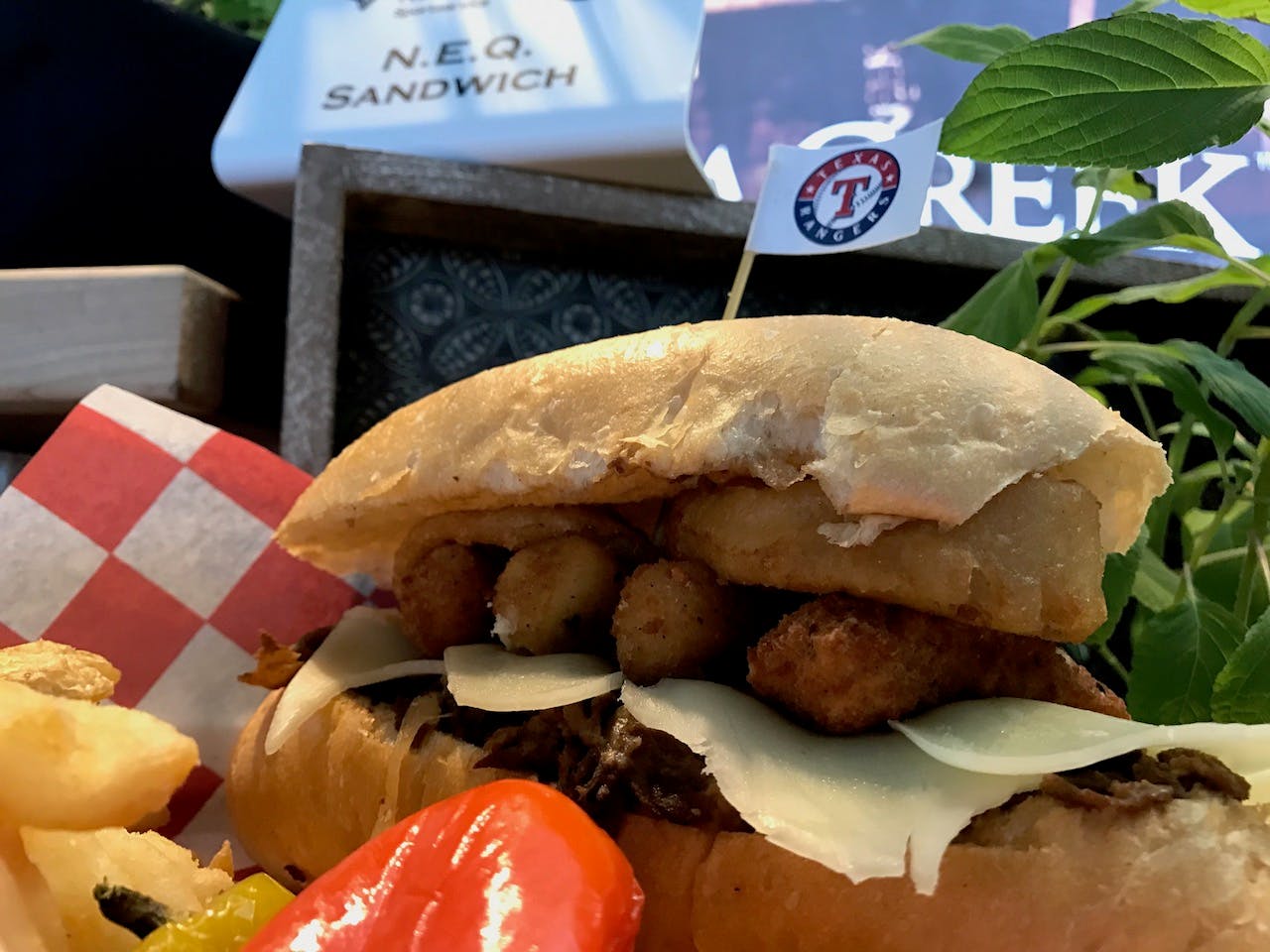 … The Farm, a sandwich that comes with a hamburger patty, fried chicken breast, and bacon, along with cheddar cheese and sriracha aioli … 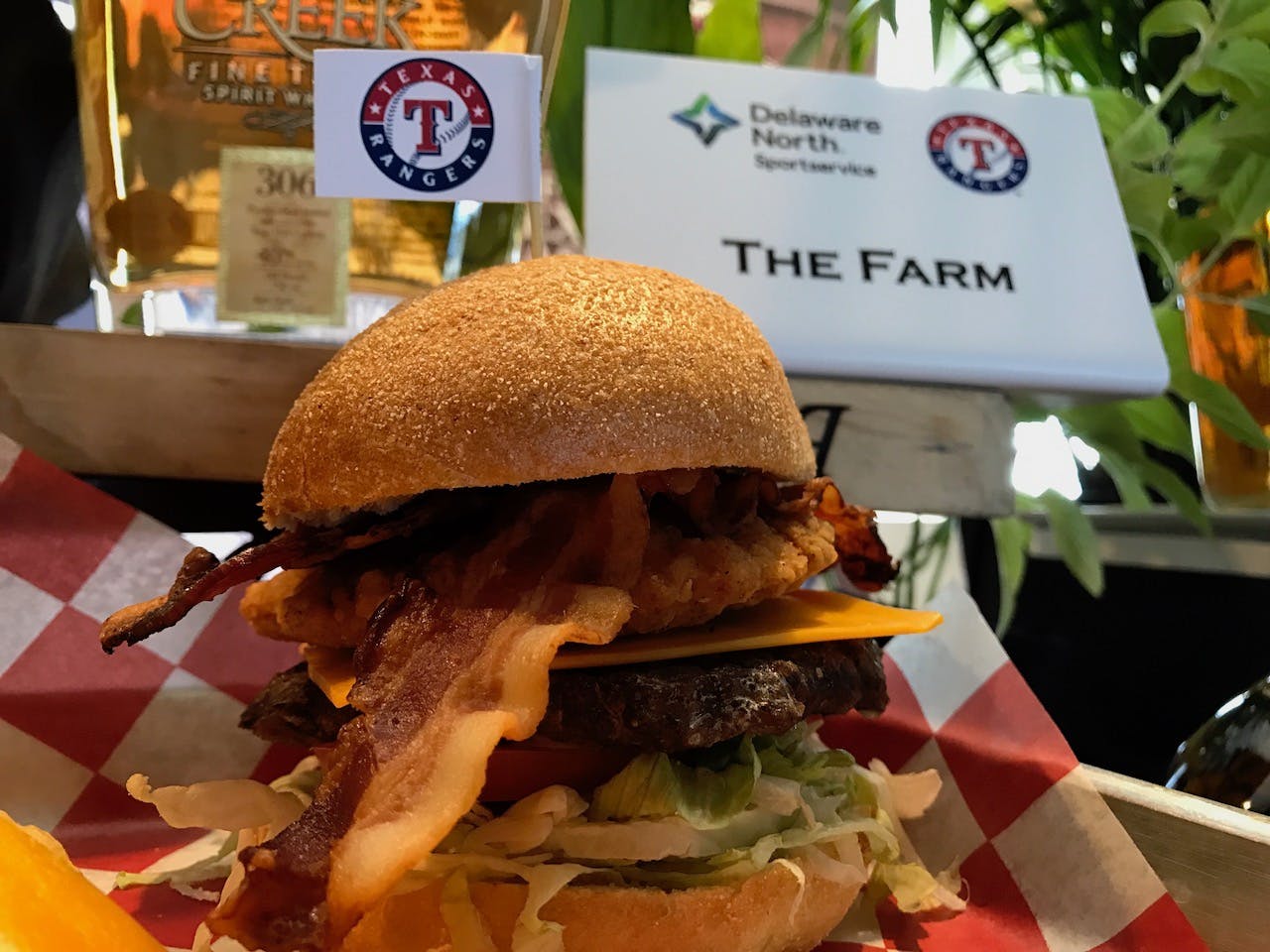 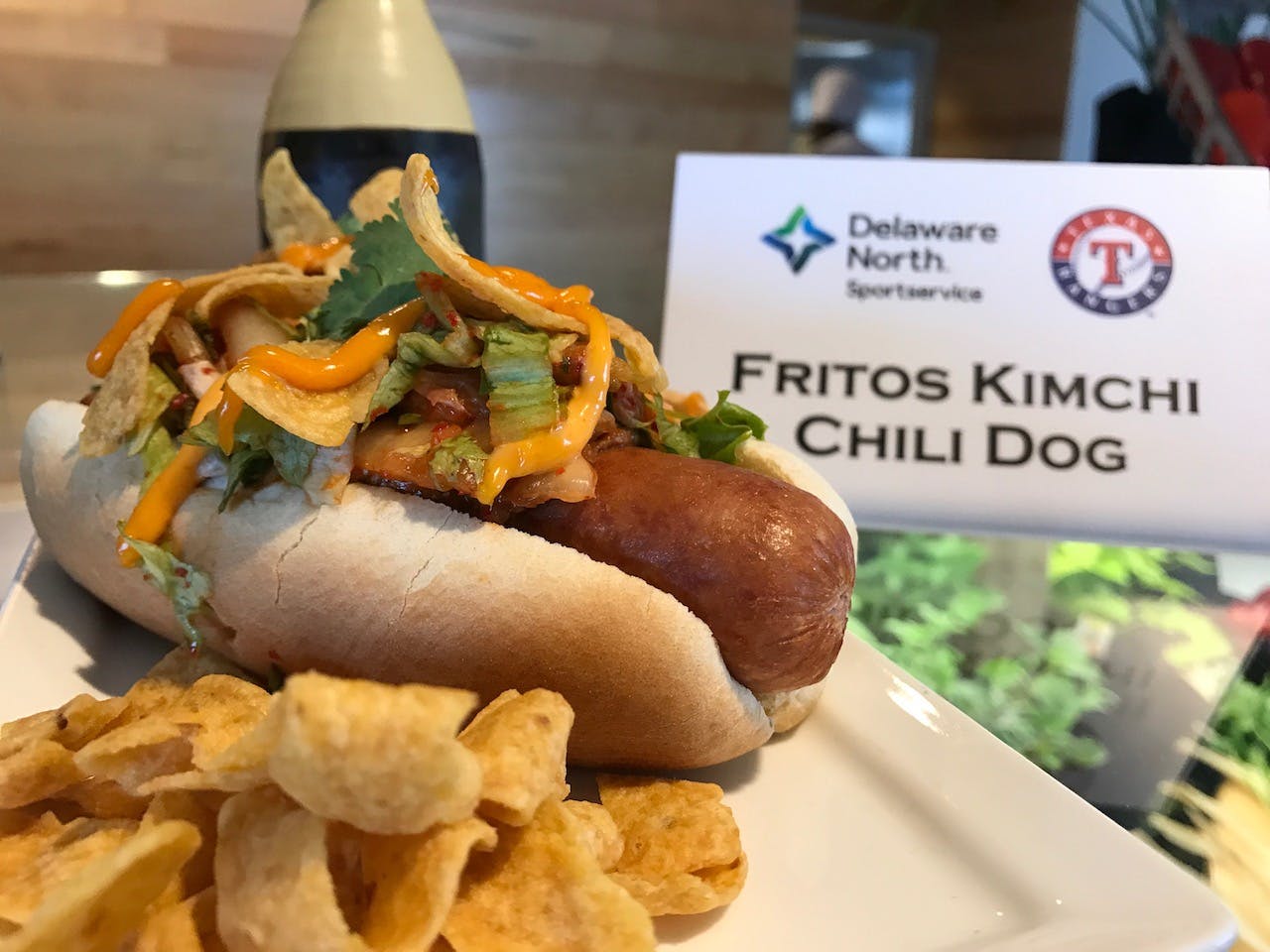 … and the Crunchy BBQ Burger, which is just a regular hamburger topped with pulled pork and off-brand Doritos. 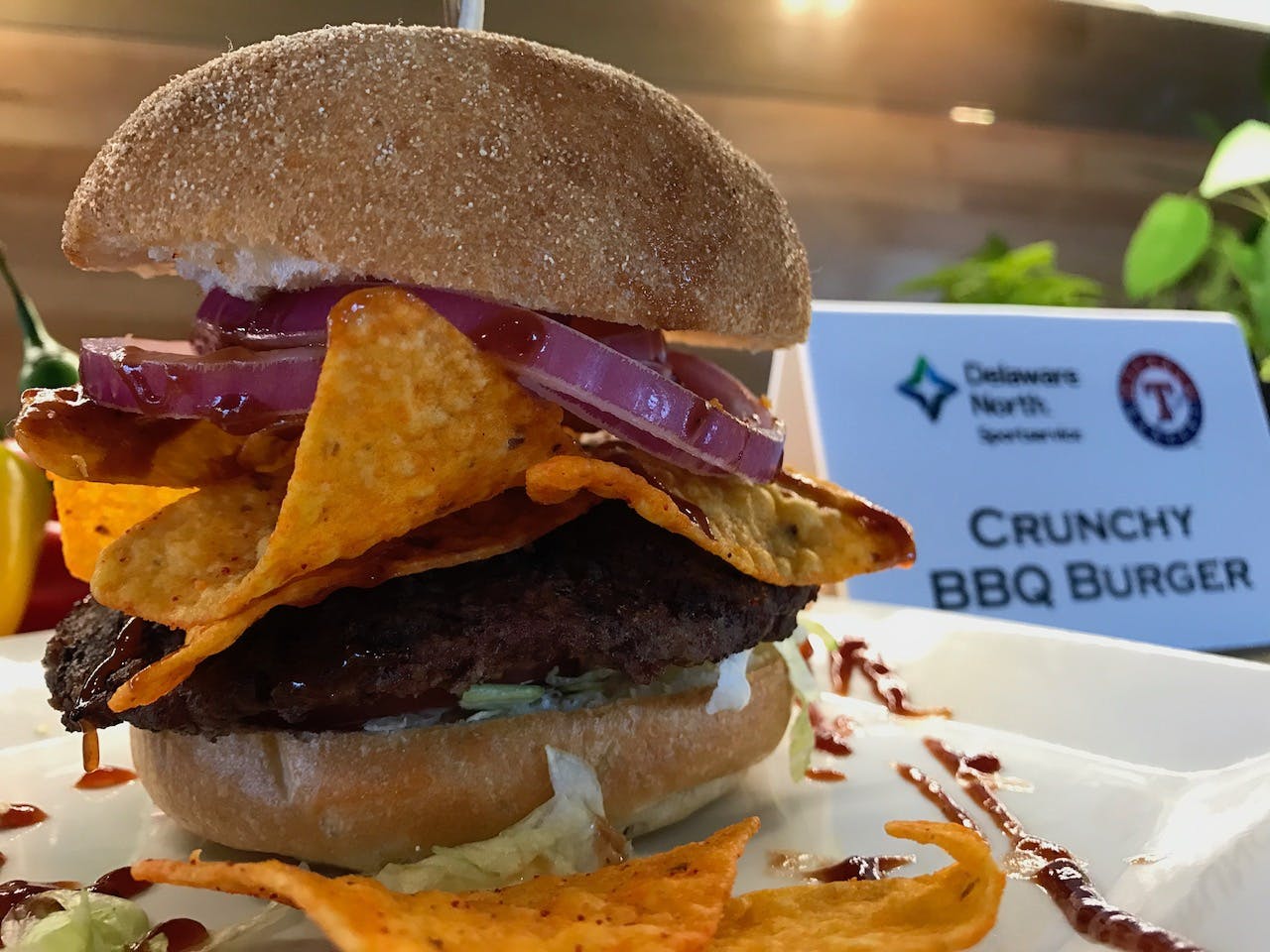 This is the ballpark fare that was presented to media to try at the park last week. The Texas Snowballs, though not entirely appetizing presented sliced in half, are the only one I found myself wanting seconds of (turns out the combination of meat tossed in sweet BBQ sauce and coated in sweet dough is pretty tasty, like a sandwich with an extra sugary brioche bun)—while others are kind of lazy (looking at you, Crunchy BBQ Burger). Other similarly decadent menu items include the Two Step Texas Philly, a 24-inch Philly cheesesteak; the Pretzel Pizza, a flatbread pizza on a pretzel crust topped with beer cheese, cheddar, and—naturally—bacon; and the Chicken and Donut Sliders, which are mini doughnuts, sliced to serve as the bun for a fried chicken breast. These are the creations of ballpark concession provider Delaware North’s DFW-based team, which began crafting the new menu after the 2016 season.

“When the season’s over, people assume we go on vacation. We don’t. Immediately, we start thinking about new items for the next year,” explains Casey Rapp, Delaware North’s general manager for the park in Arlington. “We have to come up with a lot, because if we just came up with three items, we know they’re not all gonna work. So all the managers and the chefs each come up with five, six, seven items. We have about fifty items that we throw out there and start tasting.”

The process of weeding out doesn’t just involve tasting, though—it’s also about capacity. Globe Life Park is a stadium, not a restaurant, which means that ideas that might fly if they were being prepared in small batches won’t necessarily fly for 40,000 Rangers fans. (Rapp laments the sriracha chicken breast, dipped in crushed Flamin’ Hot Cheetos and deep-fried, that couldn’t be accomplished fast enough for a stadium audience.)

So everything you eat at the park has been through a specific process that allows it to be served quickly to fans looking for a 24-inch snack between innings. Getting the M.V.T. together, for instance, involved not just conceiving of a hot dog in a tamale, but a big honkin’ hot dog—this is a two-foot-long, one-pound dog—and then finding a way to create the masa and roll it up. Delaware North tapped Irving’s Padrino Foods to make the tamale, which allows them to comfortably serve a thousand of the behemoths per game.

There are other concerns too, of course—the M.V.T. doesn’t come with an instruction manual, and figuring out how to eat the thing isn’t exactly intuitive. The $27 concoction is served in a package that is designed to fit over two people’s laps, so a family of four can hold it with the parents in the middle, children on either side, and everybody digging in from their seats.

Delaware North is headquartered in Buffalo and serves stadiums from Globe Life Park to Soldier Field in Chicago to Wembley Stadium in London—but Rapp and his locally based team are proud to keep the flavor of the menu regionally appropriate.

“The tamale—that’s Texas. We have thirty-one managers who call Globe Life Park home, and all of us live here in the DFW area. We recruit from all over—our executive chef started with a catering company that was in downtown Dallas, our Capital One Club chef was in a restaurant based out of Fort Worth,” Rapp says. “If we were in North Carolina, maybe [the Texas Snow Ball] would be pulled pork. But brisket is Texas. We try to use those ingredients when we can.”

Rapp also likes to keep the food baseball-centered—take away the Fritos and kimchi from the Fritos Kimchi Chili Dog and you’re left with a classic. Even on the park’s vegan menu—which Rapp says came about after a vocal season-ticket holder urged the stadium to offer more vegan options—the “Mediterranean Nachos” are pita chips with hummus and a tomato and olive salad. It’s still classic food, even in its most absurd forms.

Rapp credits the Boomstick—the two-foot-long hot dog served inside of the M.V.T., which they’ve been serving at the park since 2012—with kickstarting the trend in Major League ballparks toward super-sized foods. Prior to that point, this stuff was for minor leaguers and state fairs, but the Boomstick became something of a social media phenomenon, with people documenting their attempts to make it through the entire hot dog through the course of the game.

But Rapp isn’t satisfied with just starting the trend—he wants to stay ahead of it. “We always try to keep reinventing ourselves,” he says. “We want our fans to know that we can come up with a crazy two-foot-long hot dog or some black bean tamales. We don’t want to just keep going back to the well.”

Rapp has his eye on a few other stadiums that he uses as motivation to keep the Rangers’ brand of atypical foodstuffs in the national conversation. “The Green Bay Packers, they had the Horse Collar, which is a two-foot-long sausage with beer cheese,” he says. “The Arizona Diamondbacks came out with an eighteen-inch corn dog, and Arizona and us are going back and forth. I’ve never even talked to them, but I’m sure they see it that way too. The general manager for the Atlanta Braves, he transferred—he was part of the team here that came up with the Boomstick—and they have some really crazy stuff that they’re rolling out, too.”

Reading about that stadium’s Burgerizza—which involves two pounds of ground beef, a quarter pound of bacon, and six slices of cheddar cheese being sandwiched between two eight-inch pepperoni pizzas—is enough to make even the M.V.T. or the N.E.Q. Sandwich seem downright plain by comparison. But the appetite that fans have for this stuff has, at least, finally stopped surprising Rapp.

“When the Boomstick came out, we thought we would sell maybe thirty a game, if we were lucky. Probably more like fifteen. We sold five hundred,” Rapp recalls. “We didn’t have enough. And after that, we thought, ‘Oh, this is gonna die off,’ but it’s the ballpark. Everybody loves to eat that stuff at the ballpark.”