Like some now-ubiquitous celebrity who seems in retrospect to have always been around (think the cast of Seinfeld), I can’t remember the first time I ever laid eyes on a monk parakeet in the Texas wild. I think it might have been on the grounds of the Texas State Cemetery in 1998 or thereabouts, but it seems now that I can recall that being the second or third time I’d seen one. At any rate, it’s getting easier these days to say where in Texas they are not—the Panhandle, far West Texas (aside from El Paso)—instead of where they are.

Lovers of the lime-green, gray, and shocking blue natives of the Pampas of South America have put up Facebook pages for the birds in both DFW and in Austin, where a colony of 300 or so was just evicted from their longtime nests atop the obsolete light towers at UT’s Whitaker Intramural Fields complex.

Ever-adaptable, those birds are said to be rebuilding nearby even as I type. And Austin being Austin, the monks there have been Yelped. Unlike that city’s oft-slandered grackle population, the “Wild Parrots of East Austin” garnered five stars. Maybe the 2.5 star-rated grackles have become resentful: “Sometimes you can watch [monks] rumble with the Grackles—sort of like West Side Story, but on the east side with birds,” one reviewer reported.

There is no such Facebook or Yelp page for Houston’s flock, but as a resident, I can assure you that these birds are numerous here. From 2007 to 2009, I lived near a huge colony. Several hundred of the squawking, quarrelsome birds had long ago taken up residence in tall transmission towers in a railway easement dividing the cities of Bellaire and West University Place, just south of Bellaire Boulevard, and their numbers grew yearly. I captured a dazed monk in the aftermath Hurricane Ike, and he quickly rallied and rejoined his chittering comrades in one of the vast stick nests he’d helped build. On a more somber note, I once found tell-tale green feathers in some hawk poop under a tall oak tree—but hey, hawks gotta eat too.

I’ve since seen other colonies and/or individual monks all over Greater Houston. There’s a colony in San Leon, where monks have nested in the palm trees near the marina and the Railean rum distillery (which has adopted the monk as its corporate logo), and the birds give that hard-drinking, most piratical of fishing resorts even more of a yo-ho-ho vibe. I’ve more recently seen a few on power lines near the crumbling remnants of Northwest Mall, and also in Clear Lake and the East End. Just a couple of days ago, for the first time since I’ve lived in my home in the Houston Heights, I heard a pair in flight over my own backyard (I suspect they are colonizing a nearby railway yard). Fittingly, you can find plenty of monks at San Antonio’s Mission Concepcion (get it?), and also in Galveston and on Corpus Christi’s Leopard Street.

According to the Audubon Society’s 2010 Christmas bird count, there were 445 monk parakeets in Texas and 2,273 across America. Given the frequency of my own sightings and the size of their colonies, that Texas number seems really, really low, even if you account for the fact that their American numbers are said to double every 4.8 years. Even so, even 890 seems like a severe undercount, if 300 lived at UT’s intramural complex and a couple hundred more near my old house, and what would seem from the DFW Facebook page to be several hundred more scattered across the Metroplex, from Dallas and Fort Worth to Addison to Saginaw to Grand Prairie. (On the other extreme, a spokesperson for a Florida power company estimated ten years ago that 150,000 lived in nests on South Florida transmission towers alone.)

Here’s a few fun facts on one of our most colorful birds and most beloved exotic species: 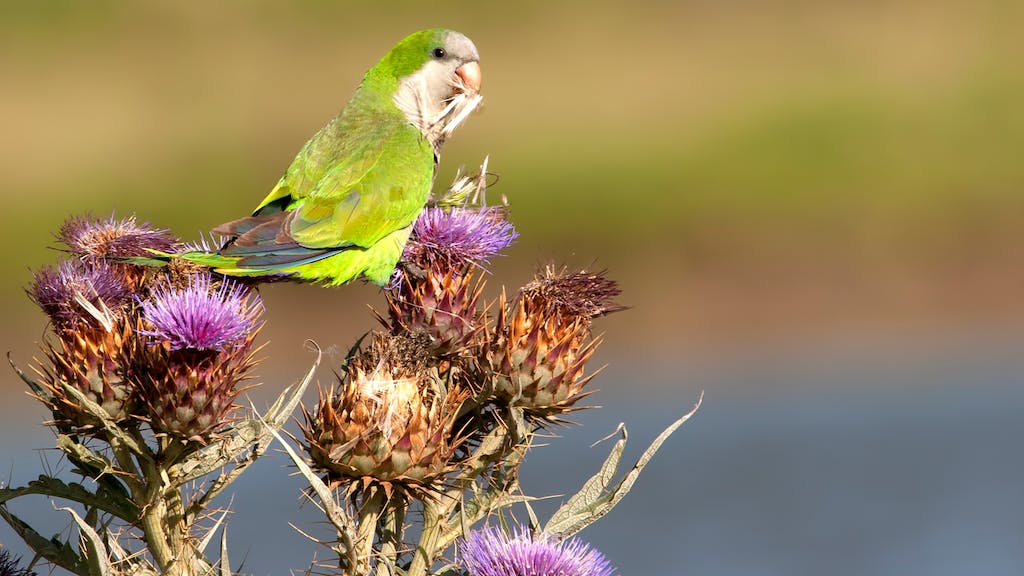 Natives of the South American subtropics, monks are neither jungle birds nor overly susceptible to a little cold; they now range as far north as southern New England and British Columbia. They had a brief vogue as pets in the sixties and seventies, but their loud squawks punched their tickets to freedom in many cases. Frazzled owners opened their cages, left a window up, and looked the other way. (For some reason lost to time, nineteen of them were released simultaneously in Austin’s Zilker Park at some point in the early eighties, perhaps explaining why Austin might have more of these birds per capita than larger Texas cities.)

According to legend, Leadbelly sang his way out of prison because the warden was so taken with his amazing voice. The monk parakeet’s inversion of that myth reminds me of how fabled twenties bluesman Alger “Texas” Alexander once sung his own way out of jail, at least according to his one-time guitar player Lowell Fulson:

Alexander [was] a little man with a great big voice. A terrible voice, but he could make plenty of noise. I used to accompany him on guitar, and he didn’t need no mike…[He] used to tell me all the things he went through. Like he got in some trouble in Texas and went to the Huntsville penitentiary, where they sentenced him to life. But he sung his way out of there! I think he stayed three months and 21 days. They run him off, telling him ‘Come back here and we’ll kill you.’ He said what happened was that they couldn’t stop him singing. He sang all that old mourning-type stuff. Nobody wanted to be in the place that he was. He just got next to them all, so they let him go. They run him out of there.

Take it from me, these are little birds with great big terrible voices, and they can make plenty of noise. But not all of the ancestors of those we find today were paroled early by their owners. In some cases, the devilishly intelligent birds opened their own cages and made their own escapes.

Well-suited to both American weather and urban and suburban habitats—in their native lands, they favor sparsely tree-studded Pampas—the escapees and the abandoned quickly found each other, were fruitful, and have multiplied. 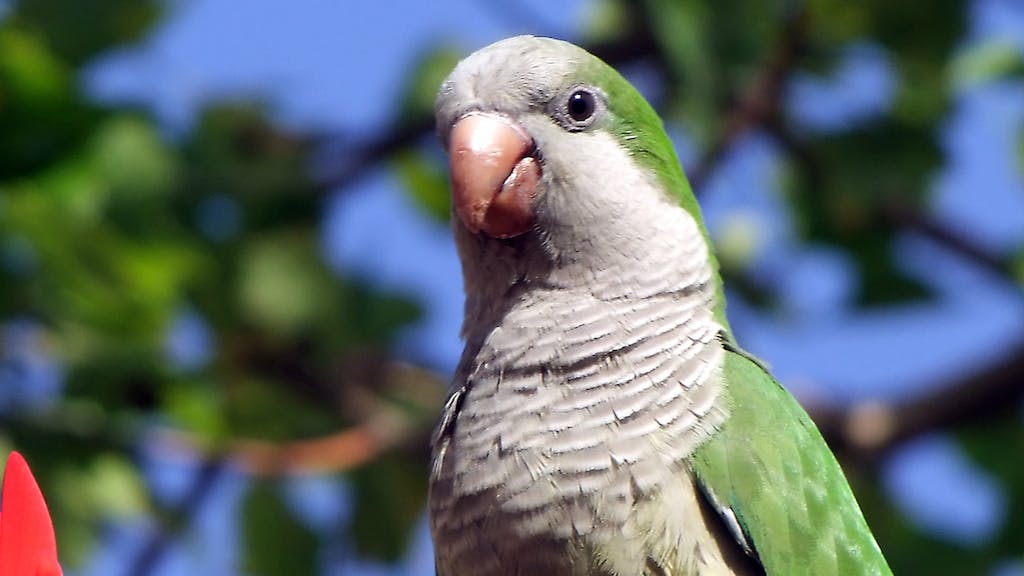 While every other member of the parrot family nests in nuclear family-size tree cavities, monks and monks alone build their own enormous communal nests out of sticks, complete with multiple entries to “apartments” for as many as twenty different monk families. On the coast, they favor palm trees, but in urban areas, they tend to build high atop transmission and cellphone towers and stadium lights. Apparently, they enjoy expansive views. As more and more Texans have moved into urban high-rises, monk parakeets have been one step ahead.

Over time these parakeet condos can get so vast—25 square feet or more, weighing several hundred pounds—that they can short-circuit power lines, causing electrical fires and power outages for whole neighborhoods.

That’s pretty much the only beef we have with these birds. They are not significant agricultural pests. They don’t kill other birds, or unlike starlings, compete for nesting sites. Nope, the odd blackout is all we can pin on the monks.

They eat pretty much what you would expect a parakeet to eat: lots of seeds, pecans, mesquite beans, and native fruit, like the loquat and the persimmon. They love acorns, and they love them even more when they don’t have to crack them open with their beaks. They’d just as soon have you run over them with your car and do that for them, which is why you often see them hopping around and pecking in oak-lined streets at certain times of the year.

They are also not averse to picnic scraps:

And they spend much more time on the ground than you might imagine parakeets might. (And as you can see, they love to hang out in groups):

Monk parakeets love to rumble, and despite reports from Austin about grackle combat, they tend to squabble most amongst themselves. Establishing a literal “pecking order” is a survival tactic, according to one monk expert:

Thank goodness for scientists, especially Elizabeth Hobson, who’s probably studied Monk Parakeet societies more systematically than anyone on the planet. A new, very nicely illustrated story on Audubon.org by Sarah Gilman highlights Hobson’s latest achievement: a play-by-play analysis of how and why these parrots fight.

According to Hobson, fights happen in a strange game of “telephone aggression,” wherein Bird A bothers Bird B, who bothers Bird C, who bothers Bird D. Who’s the beneficiary of this chain of biting and feather-pulling? Bird A, who now understands who’s who in the pecking order, and where exactly Bird A fits in. Also, any birds watching the aggression (and that’s a lot of them: rubber-necking seems to be a major past time among these parrots). Who is it safe to hassle? Who should one steer clear of? The chain of aggression tells the tale.

Each moment in an aggressive outburst is, it seems, a teachable moment. Conflict — observed, analyzed, and adapted by each member of the flock, appears to be a core mechanism for socialization and, it is presumed, better flock cohesion and better chances of flock survival.

Do They Make Good Pets?

Well, yes and no. If you can get past the incessant squawking, they can be very affectionate and amusing.

Houstonian Clint Heider once had a pet monk named Spock. “That was one of the few words he could say,” Heider remembers. He was better at emulating noises: Heider says Spock would see him get a beer and imitate the pop-top sound. Heider also says Spock could be a mischievous nuisance, “sort of like a flying cat.”

Here’s Cameron, a rescue parakeet who loves to laugh:

Jay Lee, another Houstonian, was recently adopted at random—out of the, ahem, clear blue sky, one might say—by a monk.

A couple of months back, Lee, an avid birdwatcher, heard the parakeet squawking in a nearby tree. Lee called to the bird to no avail, but as he was headed back inside, the bird circled the house, descended and landed on his hand. “I am sure he was someone’s pet,” Lee says.

Indeed. But here’s the thing. In finding a new home “Murphy,” as Lee has dubbed his new pet (“because he’s green and he’s lucky,” Lee explains), had about 6.5 million Greater Houstonians to choose from. Out of all that humanity, the bird selected Lee, who is both a Navy veteran and a member of the Flying Fish Sailors, a traditional folk band whose repertoire is heavily salted with sea shanties and old-timey nautical songs, and one that “if you ask them nicely,” will even perform in “pseudo-pirate” attire.

So Murphy the parakeet wandered lost and alone until he found Jay Lee, the pirate. And we have the nerve to call dumb people “birdbrains.”

By Will Bostwick
Critters

By Will McCarthy
Critters

Drilling in the Permian Is Lonely Work. A Rig Dog Can Help.