There’s a common refrain if Austin makes national headlines for political news outside of the Capitol. You’ve seen the city referred to as a liberal oasis in a deep red state. Maybe you’ve seen references to the bickering that goes on between Republican state officials and the far more liberal city leaders—over the Travis County Public Integrity Unit, say, or Austin City Council’s quest to ban open carry in city hall. Regardless, Austin’s reputation is firm enough for everyone to realize that the GOP presidential nominee’s choice to swing through the city this late in the campaign season is unexpected.

But Donald Trump appeared in Austin on Tuesday, his only public campaign stop in Texas since receiving the Republican nomination for president. He appeared at three different events, actually—an afternoon taping of a town hall event at ACL Live’s Moody Theater with Fox News host (and unofficial Trump advisor) Sean Hannity, an early evening fundraiser at the downtown Headliners Club—where tickets started at $2,700 and ran as high as $50,000-$100,000 per couple—and a nighttime rally at the Travis County Expo Center. The “keep it weird” city and the controversial nominee came together in ways that were, indeed, weird.

The Moody Theater—with its capacity of 2,750—didn’t fill up. The taping was set to begin at four in the afternoon; ten minutes before, people were able to walk up and enter freely. Well, people who weren’t wearing clown makeup, anyway. Protesters who dressed rather more outlandishly were turned away by the venue’s security, some offering their own pro-Trump sentiments as they denied entrance to demonstrators. (One of the people hired by the venue insisted to a colleague that he was surrounded by “people who support Hillary, but don’t know shit.”) 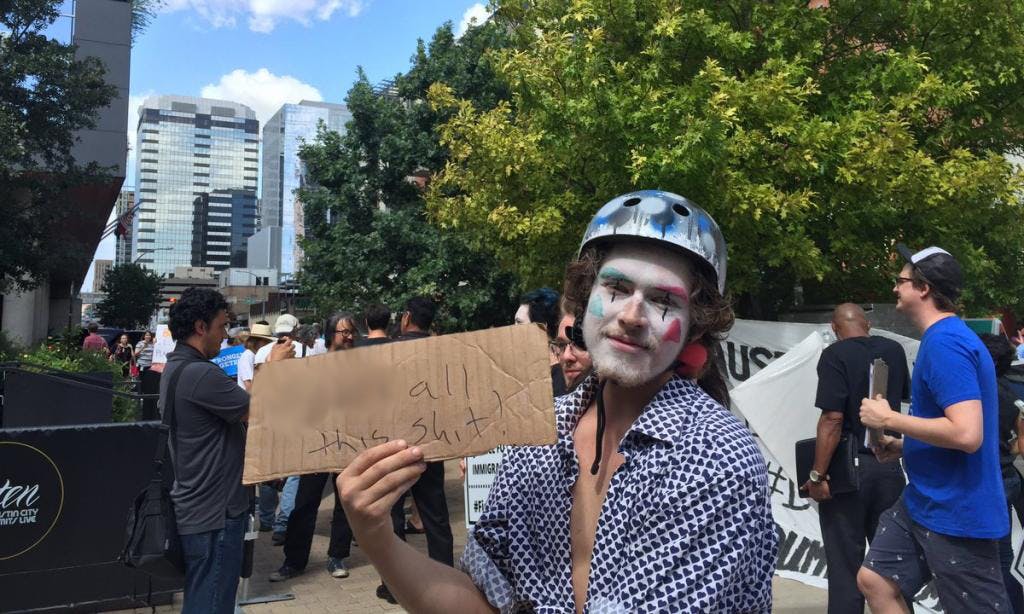 The whole affair downtown felt very traditionally Austin. It was mostly disorganized demonstrators having a good time as they sparred on camera with people from Alex Jones’s InfoWars, which has kind of been the Austin activist scene’s bread-and-butter for a while now. The InfoWars guys approached the people in clown makeup to ask them why they supported Hillary Clinton, the clown makeup people would make funny noises at them, the InfoWars guys would declare that the protesters had no coherent ideology, and then somebody with a drum would start playing it right next to the microphone. It wasn’t particularly useful discourse, but everybody seemed to enjoy their part in the proceedings.

There was much less of a protest presence at the Travis County Expo Center’s public rally. You saw some—there was a guy on the road leading up to the venue dressed as Trump dressed as the Joker from Batman, and a few lonely demonstrators stood outside the arena with a large “Trump Go Home” sign—but the crowd proved that, liberal reputation aside, it’s not hard to find a few thousand people in Austin who would spend an evening chanting “Trump! Trump! Trump!” (Rudy Giuliani, who spoke briefly before Trump, estimated the crowd at around 7,000, which seems about right.) 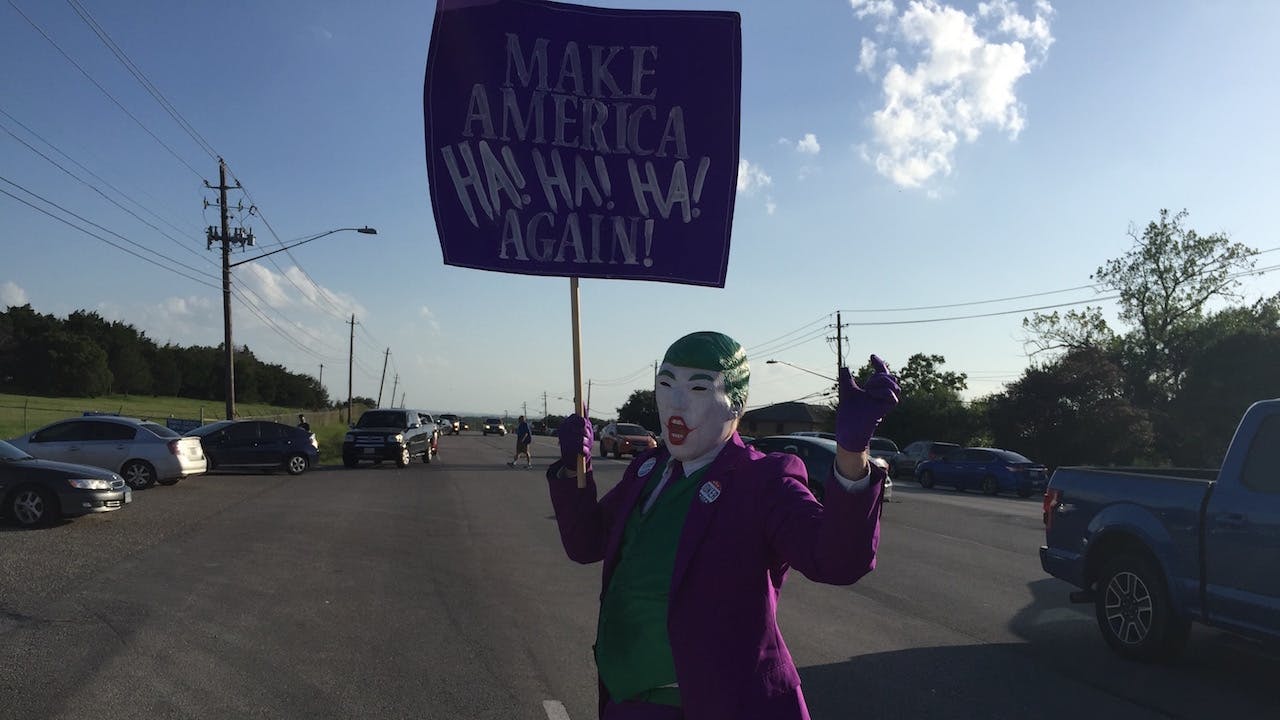 Trump-ism in Austin looks a lot like Trump-ism most places, in other words. Facets of the rally made it feel a little more homegrown—a guy outside the venue sold “Make UT Football Great Again” hats, a dude walked the venue wearing a Joy Division t-shirt and an American flag bandana as a headband, vendors sold tie-dyed “TRUMP” tees—but you wouldn’t confuse an Austin Trump rally with the ACL Festival.

That may have owed as much to the attitude of the crowd as anything. During his speech, Trump called out the media for failing to report how “friendly” his rallies were, but there was an undeniable tension. Entering the venue, people who parked on the street and walked up (rather than wait in an interminable line for parking) had to enter through a gate in the chain-link fence. A man approaching the gate barked at a group walking toward it from the opposite direction to “Wait your turn!” Walking too slowly in front of seated guests during the early undercard speeches from local Trump supporters would get shouts of “You’re blocking my view!” from the early birds. It wasn’t open aggression or anything, but for a city whose citizens tend to shrink from any conflict more extreme than raising an order card at the Alamo Drafthouse to alert their server that someone’s talking during the movie, it was a surprise.

The open aggression was saved for people who freely expressed disdain for the candidate. Sometimes that was vocal—there were several points during Trump’s speech where protesters were quickly surrounded by supporters pointing their fingers and chanting to alert security—but even before Trump entered the arena, a pair of men silently walking the venue in homemade #NeverTrumpChristian t-shirts were escorted away from the crowd by Austin police, and protected by officers until they were removed from the venue.

Going from reports across the country, this all seems fairly typical of Trump rallies. The campaign isn’t required to make their events open to people in unapproved t-shirts, and protesters during political speeches from any party tend to get shouted down. (A young woman who looked to be in her late teens or early twenties who was removed from her seat near the back of the arena for some sort of protest was drowned out, and afterward a man a few decades her senior screamed in her face on her way out of the venue.) There are extreme stories of supporters being removed from Trump rallies because of how they look, and undercover reporters have captured moments of ugliness on the campaign trail. During his speech, Trump asked “Is there any place safer to be than a Trump rally?”, which is a question that would have been interesting to pose to the two men in the unauthorized t-shirts under police protection, but they’d already been removed from the venue when he asked.

If egregious aggression occurred on Tuesday night, it wasn’t broadly noticed at the Travis County Expo Center. But the Trump rally did feel at odds with the identity that Austin has claimed for itself. Of course, there are holes in that progressive identity that Austin claims. There have been for some time, and it’s something that comes up again and again. Maybe downtown the people in the clown makeup show up in force to protest Trump, but out in, say, city council member Don Zimmerman’s district, they’re more likely to display their Trump-Pence yard signs proudly. Putting that Austin on full display, and giving the people who want to “Make America Great Again” in the state’s “liberal oasis” a chance to find one another might explain why Trump picked the city to hold his Texas rally.