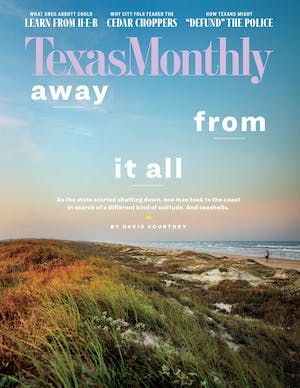 I enjoyed the June 2020 issue, particularly Christopher Hooks’s article, “Going for Broke.” But it misses an important point. The contention that an oil-and-gas cushion, rather than responsible governance, created the “Texas Miracle” may be partly true. But the miracle is a relative thing. It looks miraculous only in comparison to states that have embraced the progressive model of high taxes and even higher spending. Whatever economic hole the COVID-19 shutdown leaves behind in Texas, the ones in those states will be far deeper. Their only hope may be what Hooks hints at for Texas in his closing: off-loading the damage to other states through the mechanism of the federal government. I hope Texas does not become that kind of state.
Paul McDonnold, Stamps, Arkansas

I read the story on Go-Go’s bassist Kathy Valentine’s memoir in your books package [“What to Read Now,” June 2020]. She mentions playing with Doug Sahm and his song “She’s About a Mover.” Valentine asks about the song’s title, “What does that even mean?” Well, as someone who went to his concerts at the Municipal Auditorium, in San Antonio, when I was in high school, I can tell you. The original name of the song was “She’s a Body Mover,” which makes more sense. However, the record company asked him to change the name because they thought the original name was too risqué.
Ray Bluhm, Fredericksburg

In regard to your June Country Notes column [“A Consideration of Signs”], the sign “KEEP OUT SNAKES” referred to in the article reminds me of a similar one on a wide place on a curve on a rural dirt road near Elgin, in the seventies, that merely proclaimed, “SNAKES!” The spot had been a favorite with young couples, but the curve was directly below a house on a hill, and the parked cars frightened the wife of a man who worked nights. So he posted the one-word sign, and no one stopped there again.
Brian Barkley, Plainview

My favorite sign was hung thirty-plus years ago on a gas pump outside a convenience store near my wood shop. I clearly understood the meaning but also remember the humor it brought me. It simply stated, “Out of Work.”
Bruce Neeper, Rosenberg

I’d like to add an “amen” to the Texanist’s latest note [“Dark Clouds and Silver Linings,” June 2020]. I too have happily noticed the increased neighborliness and the mutual eye contact, especially since mouth smiles (for those of us who conscientiously continue to wear masks in public) are not visible. And the slower pace. And the quieter time to read and reflect. And even time to sort through one’s underwear drawer (I wore THAT?!). There are many silver linings.
Grace Neie, San Antonio

Editors’ note: A photo caption in “The Everyday Auteur,” in the July issue, misidentified Bill Daniel as Clark Walker. We regret the error.