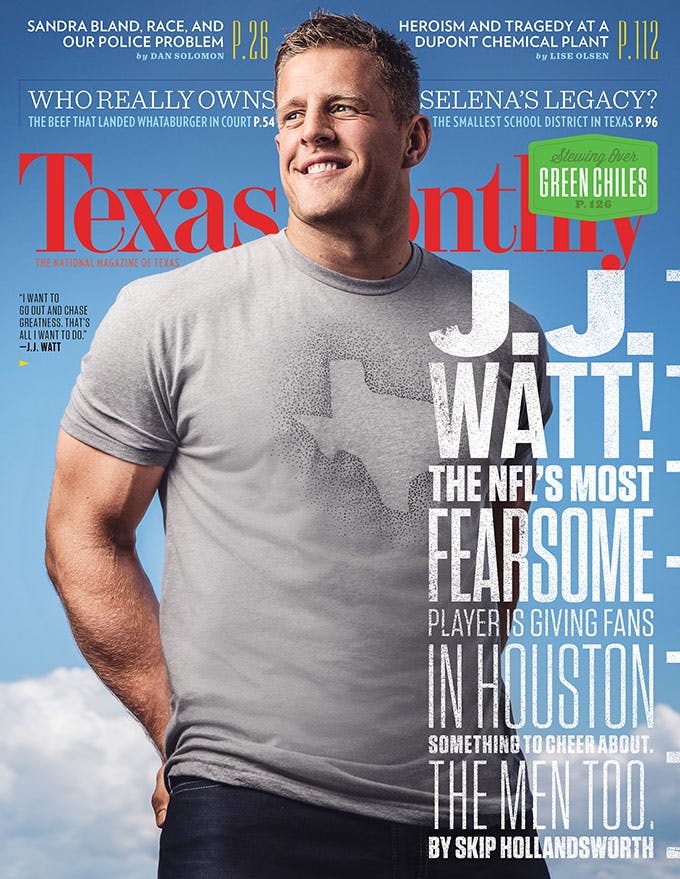 The first time J.J. Watt entered my typically football-less consciousness was a couple of years ago during a conversation with my brother, Philip. “J.J. Watt, man. He’s everywhere.” Who? I asked. I’m sure I’d heard of him before—I do, after all, obsessively read Texas news—but somehow, the speed with which his star was rising had eluded me. Philip, who lives in Houston, where we were born and raised, enlightened me to how Watt had managed to capture the hearts of Houstonians in the short time since the defensive end was drafted in 2011 (an enormously hard feat, as we can be a notoriously prickly bunch when it comes to embracing our pro teams). First, there was the impressive list of statistics Watt had accumulated during his short tenure playing for the Texans: in 2012 he had 69 solo tackles, 20.5 sacks, 4 forced fumbles, 2 fumble recoveries, 16 deflected passes and was voted Defensive Player of the Year. Then, there was his nice-guy reputation. He was a friendly presence on billboards and in advertisements and on The New Girl. He regularly attended numerous charity and community outings. And his wholesome, boyish looks—somewhat at odds with his hulking frame—indicated it was all coming from a genuine place.

So, just like how when you buy a new car and then you see ones just like it on every road, all of a sudden, Watt was indeed everywhere. And now that includes the cover of our September issue, on newsstands August 20, with a story by executive editor Skip Hollandsworth, who wrote about Watt, a once-in-a-lifetime player in both talent and spirit. Below, an excerpt from the story, which will be available online on Wednesday.

When football coaches talk about Watt, they have no shortage of superlatives. Texans head coach Bill O’Brien called Watt the “best defensive player I’ve ever been around.” Denver Broncos defensive coordinator Wade Phillips, who fiercely pushed for the Texans to draft Watt in 2011 when he was their defensive coordinator, described Watt as the “perfect football player.”

“The consensus among everybody in the NFL is that something even beyond the sky, whatever that might be, is the limit for J.J. He’s in uncharted territory for a defensive end,” said sportswriter Dale Robertson, who began covering pro football in Houston in 1976. “I can promise you that, as we speak, coaches who have to play the Texans this upcoming season are staring at game film, wondering just what, if anything, they can do to keep J.J. out of their backfields. And they have no idea what to do.”

Watt’s torturous weight-lifting workouts, his eight-thousand-calorie-a-day eating program, and his ascetic lifestyle—he likes to be asleep by seven-thirty to rest his body—are constant fodder for football fans. But as Robertson hastened to point out, Watt’s on-field prowess and training regimen don’t completely account for the fact that he has 891,000 followers on Twitter and 1 million on Instagram. It isn’t solely because of his pass-rushing skills that he made the covers of Sports Illustrated and ESPN The Magazine in the same week this past November—the sporting equivalent of Bruce Springsteen’s simultaneously being featured on the covers of Newsweek and Time in 1975.

“This might sound strange coming from me, because I’m about as old and as cynical as they come,” said Robertson. “But what J.J. has got is a charisma that you don’t often see these days among professional athletes. He seems to be the real thing—an old-fashioned, down-to-earth hero of sorts who hasn’t let all the fame mess with his head. After that charity softball game, he actually sent me a personal tweet saying, ‘Hey, Dale, thanks for coming out.’ I mean, who does that anymore?”

“Believe me, this guy is different,” said Watt’s best friend on the team, veteran punter Shane Lechler. “He gives out handwritten Christmas cards with a couple of hundred bucks to the team staffers, from the guys who cook the food to the guys who wash the uniforms. He goes around to all the hospitals and visits kids who have cancer. He raises money through his charity. People have come up to me and asked, ‘Is J.J. for real?’ And I say, ‘He’s absolutely for real. He doesn’t have a fake public persona. What you see is what you get.’ ”

Robert McNair, the billionaire Houston businessman who owns the Texans and who last year gladly renegotiated Watt’s contract, giving him a six-year extension worth $100 million, with at least $50 million of it guaranteed, told me that he can think of only three Houston athletes who have made a similar impact on the city. “There’s Nolan Ryan [the Hall of Fame pitcher for the Astros], Hakeem Olajuwon [who led the University of Houston to three Final Fours and then led the Houston Rockets to two NBA championships], and Earl Campbell [the running back who won three NFL rushing titles with the Houston Oilers, the forerunner to the Texans]. But there’s something special about J.J. People feel personally connected to him. Wherever I go, someone comes up to me and says how lucky we are to have J.J. in Houston.”