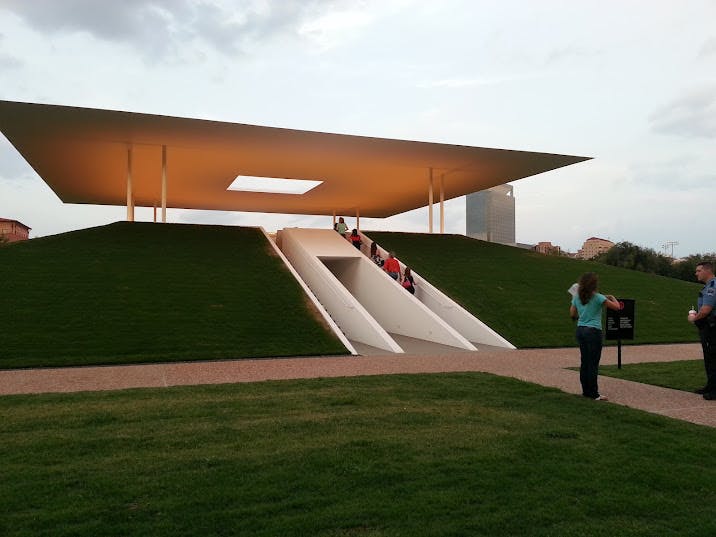 During a recent trip to Houston, I decided to make an early-bird dinner reservation so I could get over to the Rice University campus in time for the evening viewing of James Turrell’s Light Epiphany. Open since June, the site-specific “skyspace” was commissioned to mark the university’s centennial. The pyramidal structure has been outfitted with LED lights that Turrell has programmed to change in particular sequences—one just before sunrise, one just after sunset—in accordance with the solar calendar. Seeing as how the sun always sets on time, I didn’t want to be late.

As I hurried toward the structure (located next to the Shepherd School of Music), my first thought was that it looked like some sort of futuristic hover craft. I handed over the email confirmation I’d printed out (though free, reservations are required for the sunset show) and fell in line with the other visitors. Heading up the white staircase embedded in the structure’s grassy slope, I felt like Roy at the end of Close Encounters of the Third Kind as he walked, willingly, up the ramp and into the mother ship. 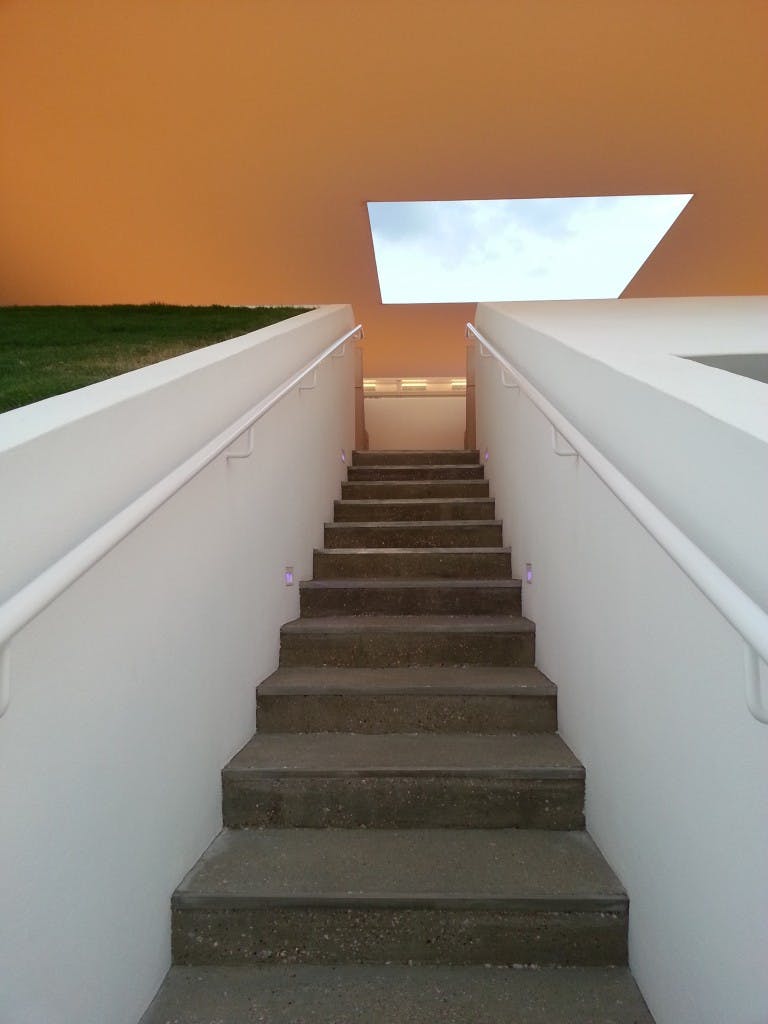 I took a seat on the poured-concrete benches and peered down on the folks who had gotten there early enough to snag a spot in the structure’s lower level. (Is that Steven Spielberg in the blue shirt, waving to me?) The skyspace can hold 120 people at a time, but only 44 can sit in the lower viewing area. 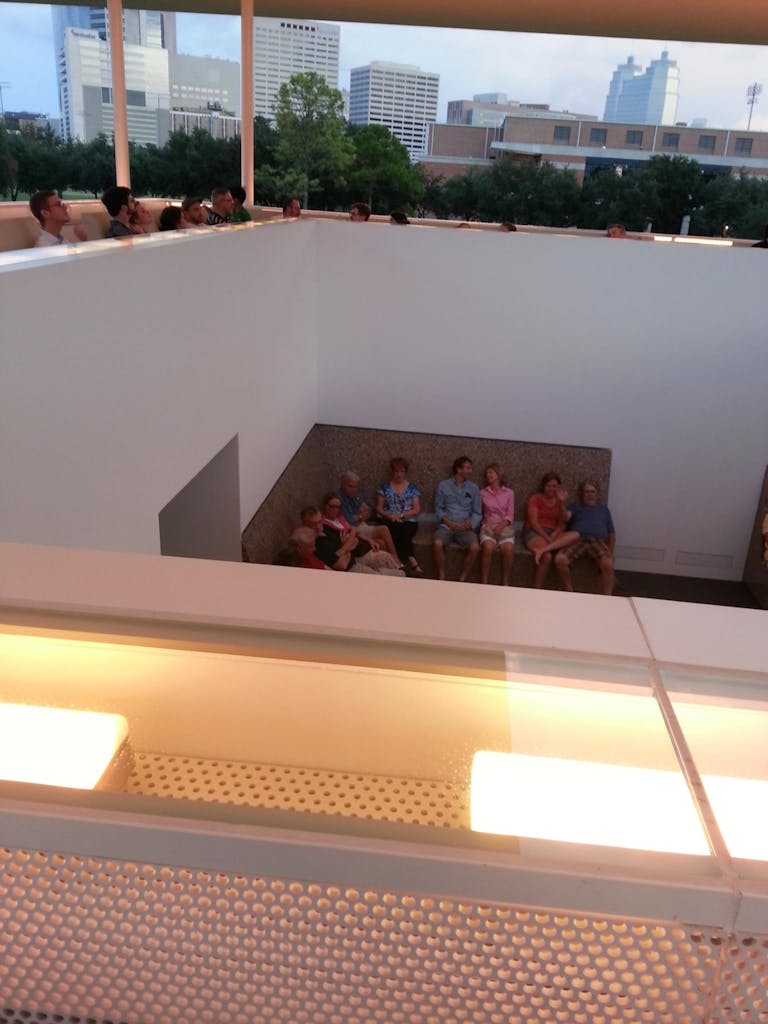 The rectangular cubes of light that point up toward the white, square ceiling (it’s 72 feet across) soon began to change color, bathing both the ceiling and the 14-by-14-foot aperture that’s cut out of it with increasingly intense hues of orange, pink, blue, and gold. 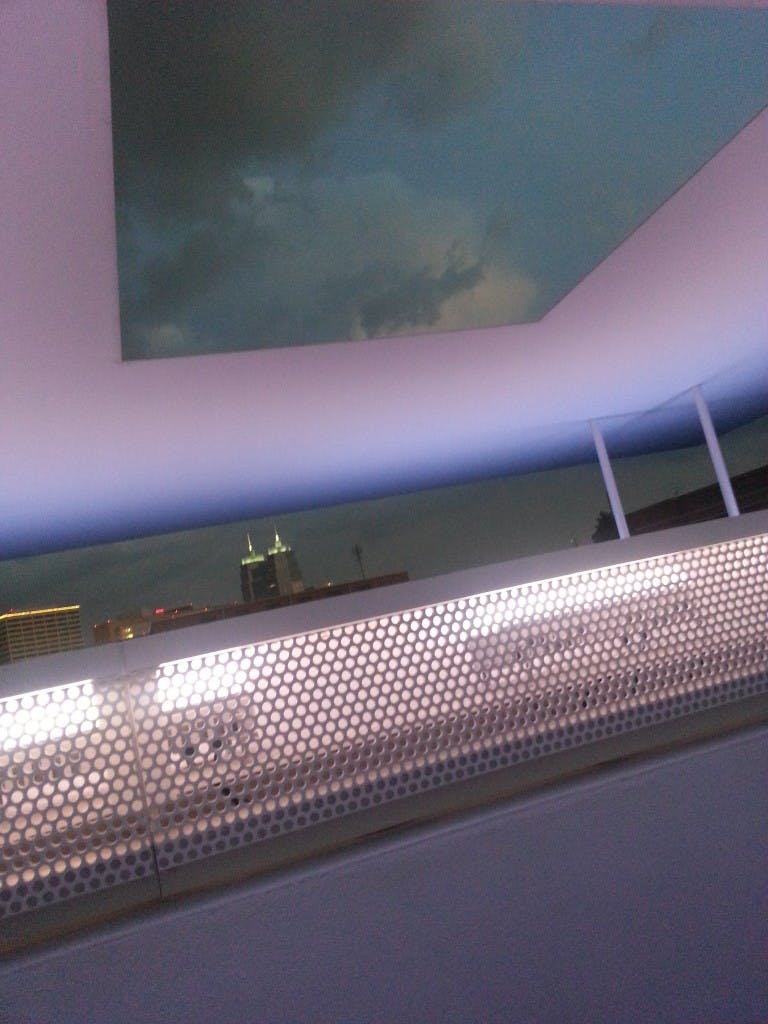 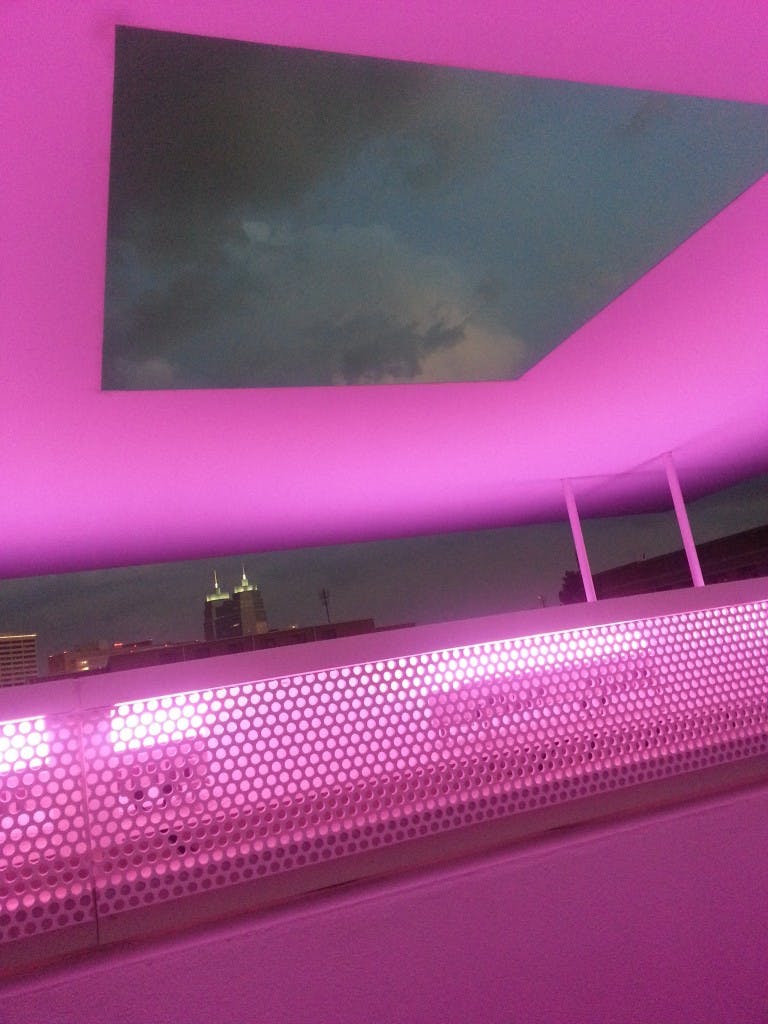 As I kept my gaze trained on the open space in the ceiling, my brain did its best to make sense of what my eyes thought they were seeing. It was as if the sky itself was changing colors. The effect reminded me of looking into my grandmother’s makeup mirror and switching between its four different light settings to see how the color of my eyes would change. “It’s clear, of course, that I haven’t changed the color of the sky—only our context of vision,” Turrell told CultureMap Houstonback in May. “In a way, this piece allows us to see ourselves seeing.” 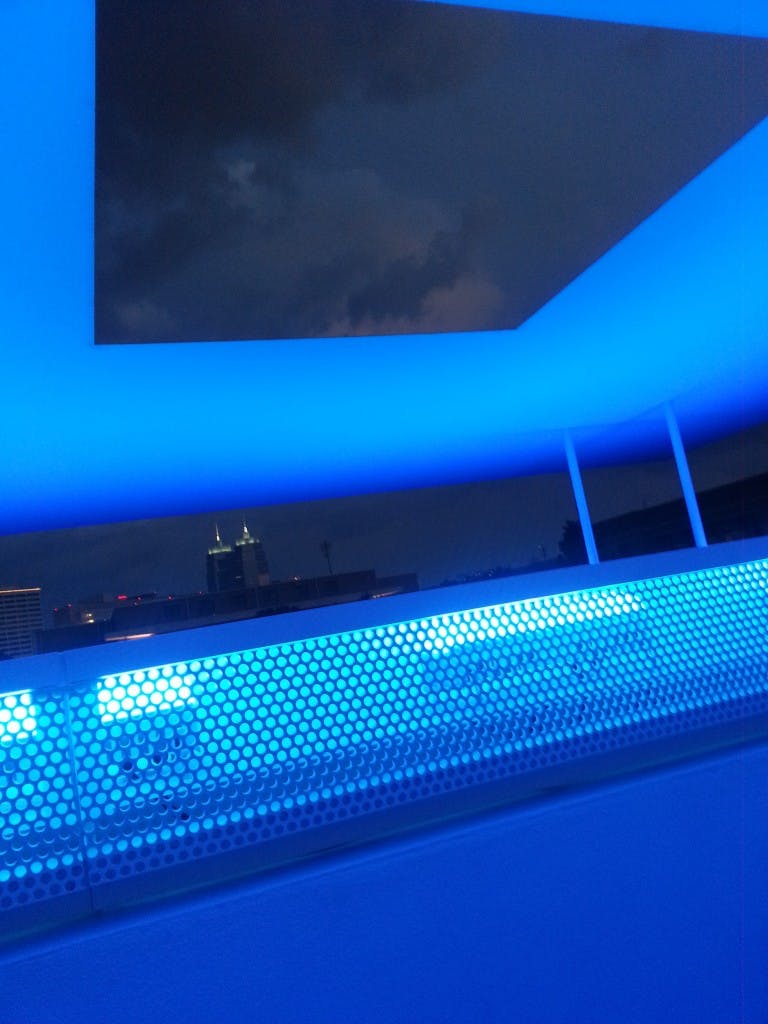 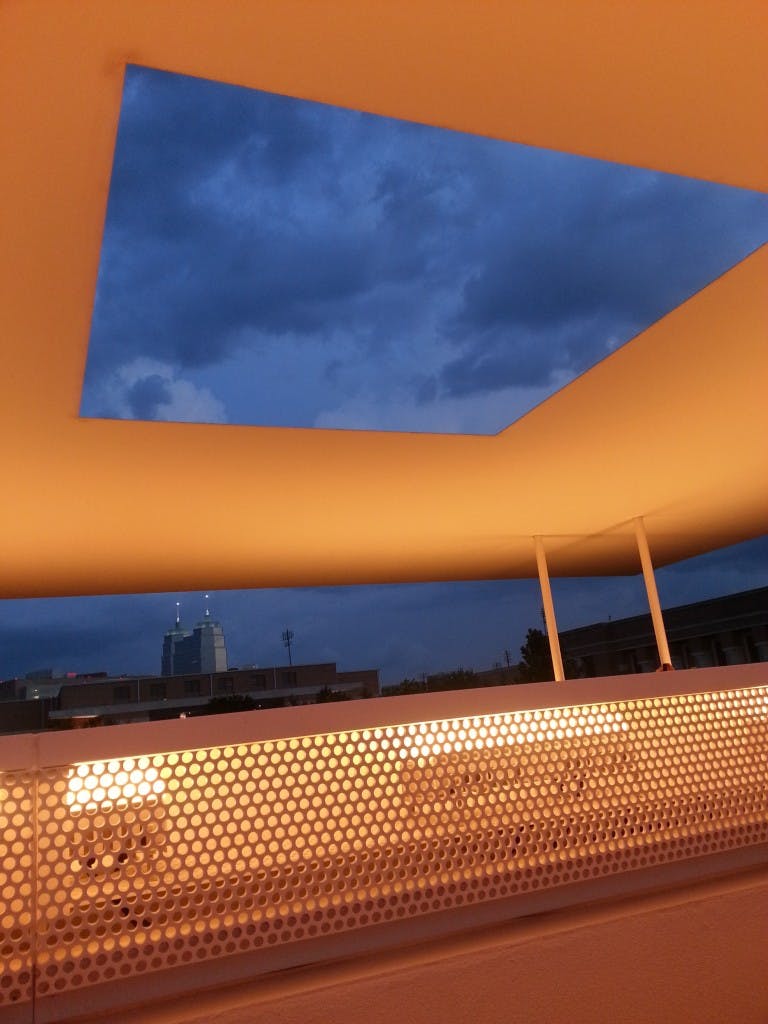 As for Mimi Swartz’s prediction that the skyspace is “destined to become the hottest make-out spot on campus, if not in the whole damn town,” I didn’t see any lip-locking going on during my visit, but the the night was still young when I left. 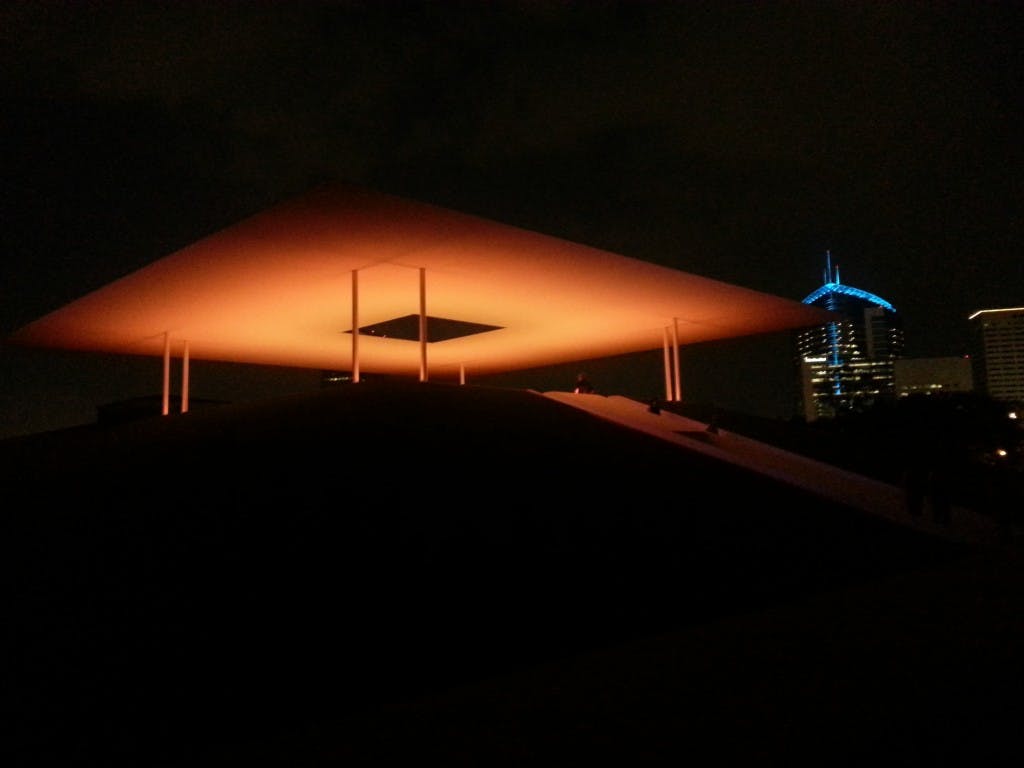