It’s hard to believe that another year of wandering is in the books. To mark the occasion, I’ve gone back through all of my (barely legible) notes and (thousands of) photos to pluck out a few of the places and experiences that have stood out in my travels across Texas in 2016. I scratched a number of things off of my Texas to-do list, like going bass fishing in Toledo Bend Reservoir, marveling at the Orange Show, in Houston, and driving the Texas portion of Route 66. But I also managed to add even more places to that never-ending must-see-for-myself list thanks to all of the suggestions I’ve culled from friends and strangers and readers (thank you, and keep ’em coming). So while I’m already planning my next twelve months of road trips, here’s a quick look back at what turned out to be an outstanding year of exploring this great state of ours. 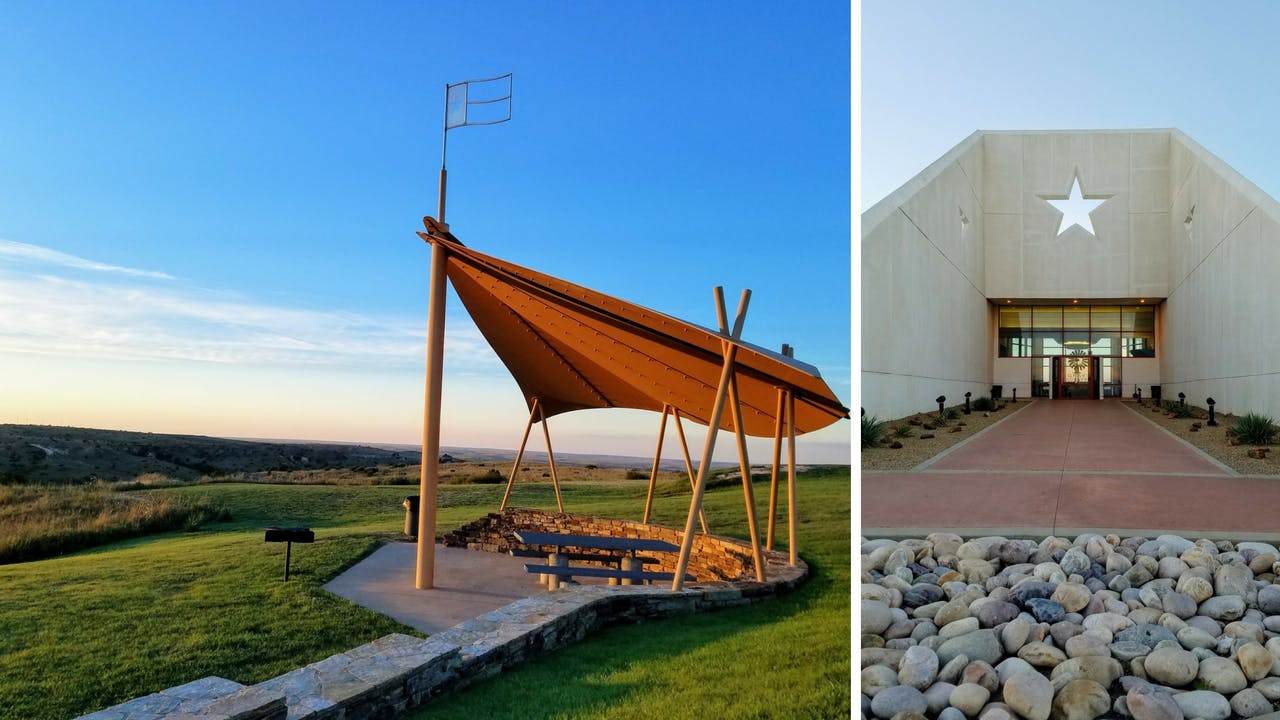 1. Prettiest rest stop: The Gray County Safety Rest Area, just west of Alanreed (and about 65 miles east of Amarillo), was bathed in a gorgeous Panhandle sunset when I pulled in for a pit stop back in September as I was driving the Texas portion of Route 66. Though I’d written about its Texas-shaped barbecue grills, tepee-inspired picnic arbors, and 57-foot-tall walls of white concrete before, it was my first time to see the SRA, with its unobstructed views of the High Plains, for myself.

2. Most scenic drive: In Texas, beaches are considered public highways, and none is prettier (or longer) than the sixty-mile stretch along Padre Island National Seashore (aka, “PINS”). With the windows rolled down and the radio tuned to a local ranchera station, I went cruising along the Gulf for as far as I thought I could safely make it in my two-wheel-drive rental (about ten miles). As the traffic thinned out and the debris picked up, I was already plotting my return—in a four-wheel-drive rig. Read the park’s “Driving Down Island Tips and Regulations” before making your own attempt.

3. Brightest museum exhibit: Some of the stunning hard-edge paintings on view at the Modern Art Museum of Fort Worth’s “KAWS: Where the End Starts” were so bright I had to (playfully) wear shades. Curated by Andrea Karnes, the exhibit, which is on view through January 22, 2017, also includes several of the Brooklyn-based artist’s room-filling sculptures. 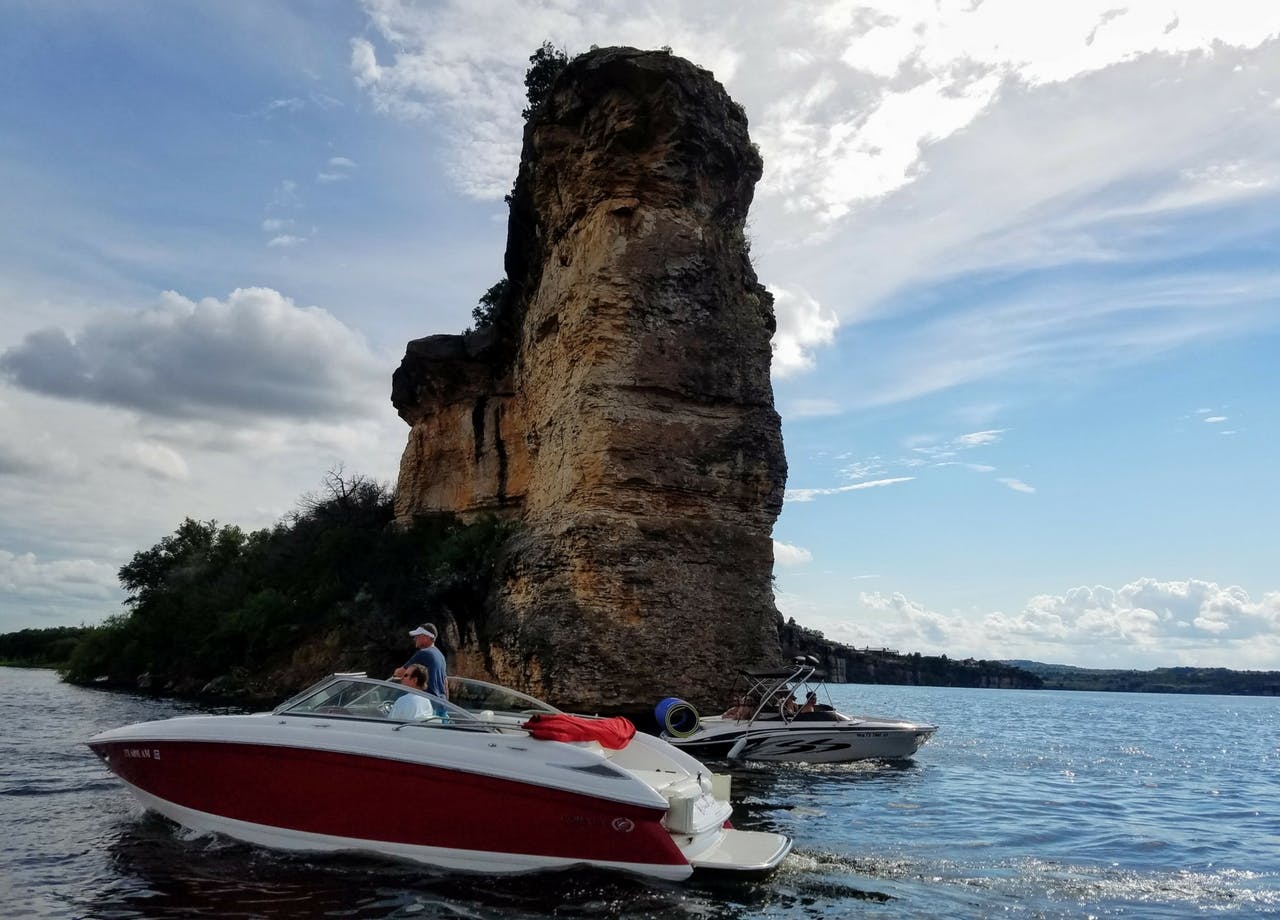 4. Most relaxing summer weekend: Though it has a reputation as a playground for both partiers and cliff-diving daredevils (see “Get Thee To Water,” entry #16), Possum Kingdom Lake was perfectly placid when my friends and I visited in late August. Not only did we luck into favorable weather, but the timing of our trip—the first weekend after school started up again—meant that the rowdy crowd that typically turns the cove near Hell’s Gate into a watery frat party had already come and gone for the season. By the way, if you’ve ever wondered how PK got its name, the Texanist has the answer for you.

5. Best lunch at a car wash: I finally got to scratch “Eat red cheese enchiladas at H&H Car Wash” off of my Texas to-do list in October, when I made my first (but not last) visit to El Paso’s famed hybrid institution. (Check out Sterry Butcher’s El Paso Trip Guide to help plan your own red enchilada tour of the state’s westernmost metropolis.)

6. Funniest roadside attraction: First there was Prada Marfa, in Valentine. Now there’s Target Marathon, along U.S. 90 between Alpine and Marathon. While the former is technically an art installation, the latter, which popped up at the beginning of the year, seems to be a cheeky homage that further stokes West Texas’s faux-shop Insta-frenzy.

7. Biggest (little) fish story: I can brag of neither the quantity (one) nor the quality (small) of my haul during my first bass-fishing attempt out on Toledo Bend Reservoir, but my trip out to East Texas was one of the year’s most enjoyable. (See also, the next entry.)

8. Tastiest pie in a small town: Whenever somebody asks me what I do, I like to joke that I eat pie in small towns for a living, which would be a lot funnier if it wasn’t so true. The slice of coconut cream, complete with towering meringue, that I took to go from Imogene’s Cafe and Homemade Baked Goods, in San Augustine, was the best I had all year.

9. Best impromptu drive down a back road: While I a friend and I were out doing some wandering for my Wimberley Trip Guide, we spied a tiny thoroughfare in our trusty Roads of Texas atlas that wound its way around and even through a Hill Country stream. Little Blanco Road, as CR 101 is known, turned out to be the type of detour we’ll always go out of our way to take: it’s short (it only runs five miles between U.S. 281 and Blanco Kendelia Road), narrow, picturesque, and secluded, plus we got to baptize our tires in the Little Blanco River’s crystalline waters.

10. Best meal in the middle of nowhere: Marfa is known for many things, but reliable dining options has not historically be one of them. So my friends and I were cautiously optimistic with the addition of LaVenture at the newly opened Hotel Saint George. When our meal, which included everything from a juicy burger to sumptuous prawns, turned out to be one of the best we’d had in recent memory, we were overjoyed. Stay tuned for a second, more casual restaurant to be added soon.

11. Most entertaining attempt at viticulture: When Robert and Laurie Williamson, the couple who run Rancho Loma, a farmhouse restaurant and modern B&B in Talpa, invited a friend and me to their vineyard-planting party, we grabbed our gardening gloves and hightailed it to the middle of the state. Though we may have arrived too late to help with the morning planting (oops), we were more than happy to spend the afternoon doing a little earth-stomping around the newly installed seedlings. And now, with the debut of RLV’s first-release wines, we can finally taste the fruits of our “labor.”

12. Quirkiest landmark/labor of love: When a Houston friend said he was taking me to the place he considered to be most representative of his city’s singular character, I had no clue where we were headed. Maybe to the Menil Collection? Perhaps to the sizable Chinatown? Instead, we pulled up to the Orange Show, a magical, maze-like folk art environment that was created over decades by a local postal worker. As kitschy as it is detailed, it stands as a testament to the diversity of dreams that are realized—and rewarded—in Texas’s largest city. For more tips on what to do while you’re in town, check out my “48 Hours in Houston” itinerary.

13. Favorite small-town museum: I first learned of the Milburn-Price Culture Museum, in Vega, when I was eating breakfast at the Hickory Inn Cafe, a few blocks away. Because I’m a fan of humble repositories of local history, I wandered over afterward to take a look. What I found was a well-arranged display of donated artifacts and preserved memories from across Oldham County that I’d highly recommend you see for yourself as you traverse Route 66.

14. Best home(s) away from home: I spent the end of 2015 and the beginning of 2016 checking into a couple dozen hotels, B&Bs, cabins, lodges, resorts, and even one former jail cell in my quest to find the ten best new or newly renovated places to stay across the state. And while each of the finalists stood out in their own way (Sayles Landmark for its design, the Cell Block for its diversions, etc.), I’ve grown particularly fond of the South Congress Hotel, in Austin. Granted, it is a favorable distance from where I spend most of my time (i.e., it’s just down the street from Texas Monthly‘s headquarters), but its den-like lobby has become my preferred satellite office, Café No Sé is now a favored breakfast spot, Mañana is my go-to for morning coffee and juice, and I’ve been known to run into the hotel gift shop (after zipping through the other onsite boutiques) to stock up on the Aesop toiletries that are on hand in the hotel’s bathrooms.

15. Favorite collaboration (and shameless plug): A few years ago, a coworker let me borrow his copy of the Wildsam Field Guide to Austin. I never gave it back. It was unlike any travel guide I’d read, with its almanac of historical nuggets, interviews with locals, and overall emphasis on storytelling. So when Wildsam’s founder, Taylor Bruce (who spent seven years as a magazine travel writer himself), called me up and asked if I’d serve as the city editor for the second Texas-based field guide he was assembling, I said yes immediately. In November, we debuted the Wildsam Field Guide to San Antonio, a city that’s easy to love if a bit daunting to navigate given its historical momentousness and hordes of tourists. The tidbits that made our final cut include everything from a primer on the events of a charreada and an anecdote about an overheated visiting pope to a map of San Antonio’s most tranquil spots and an excerpt from an 1877 Harper’s Magazine profile of the city. It’s our hope that whether you’ve been many times or are planning your first visit, you’ll soon have a deeper appreciation for the city that is the motherland of Texas. (For more San Antonio travel itineraries, check out the Texas Monthly trip guides to Southtown and the historic Mission Trail.)

Objects of Our Affection