Photographer James H. Evans moved to Marathon from Austin in 1988 with an idea that he’d try to make himself into the Ansel Adams of the Big Bend. He soon developed the methods he still uses: going into the national park for months at a time, where he’ll set up a home base in his trusty Airstream Bambi and then wander off for days in his truck or on foot. Sometimes he’ll shoot, but just as often he’ll sit and observe. He’ll often spend entire afternoons studying the way rock formations change with the passing sun. He can read at a glance the mood of distant mountains the same way you would your spouse’s at the dinner table. The landscape is dramatic and severe, and Evans says anyone can take a great picture there. But his relationship with the area makes his photos different. There’s a warmth in images of even the most unforgiving cliff face. You can feel his affection for the place.

Last spring, the mountains showed him something new. “There were flowers in places where I’d never seen them before. It was a real buzz, especially in the backcountry, the roads that aren’t traveled much. There were whole fields of bicolor mustards or purple basket flowers. Shooting flowers can be kind of hokey. It’s cliché. I’d never shot a bluebonnet in my life. But I had to document this.”

He started to think of the wildflower crop as the “hundred-year bloom.” The term will sound inflated to botanists and longtime far West Texans who remember other spectacular years, but it fit the romantic pull that Evans felt. “There were patches of color that were miles long. You could smell them. And there were sounds. All the critters were happy. You could hear swarms of bees flying by.”

The bloom was, in fact, rare and special, the by-product of a long-prayed-for correction in Chihuahuan Desert weather patterns. From September 2010 until January 2012, no appreciable rain fell across large portions of the national park; 2011 was the driest year on record. In the middle of that drought, in February 2011, three consecutive days of single-digit temperatures froze yuccas to their roots and reduced thousands of prickly pears to piles of dead pads. Only in 2014 did the area again receive its normal ten inches of annual rain, much of it hitting late in the year. Significantly, that rain came not in violent downpours but moderate, near-weekly showers that stretched through a mild winter and all the way into July. So wildflowers sprang up earlier and more densely than in any year in recent memory. And instead of appearing in ribbons along roadsides, the beneficiaries of rainwater runoff from the pavement, they fanned out like carpet across the desert floor and up mountainsides. Then, thanks to an uncharacteristically cool May and June, they stayed longer.

“Usually the heat takes over in May and the bluebonnets are gone,” said Evans, who likes to sleep outside when he’s in the field. “But I’d wake up on top of my truck and my sleeping bag would be covered with dew—in May. I’ve always spent May and June in the darkroom. It has an air conditioner.”

He stayed in the park until July, and the photos he brought out are stunning. Ocotillo groves so thick they look like large red pools. The Chisos so green they could be on a postcard from Ireland. He did tight shots of greenthreads and grassland paintbrushes, flowers he’d never seen before, and the only stand of pink yuccas he’s ever found in the park. He used a strobe to light the blooms and a slightly slower shutter speed to pick up the sky behind them. “I think of landscapes as portraits. I tried to include the weather when I could. I wanted to show it as beautiful as it was. I was worried that this would never happen again.” 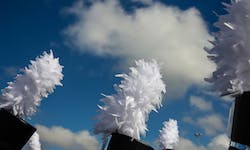 By Greg Kendall-Ball and Abby Johnston

Little Schoolhouse on the Prairie