The late seventies might be forgettable to some, but Bob “Daddy-O” Wade, the Texas artist with a personality to match his far-out psychedelic works, was having the time of his life. “I was on a hell of a roll,” Daddy-O explained. “I was single at the time and just footloose and fancy-free. I had quit teaching at North Texas and was able to devote my time to following my path—and I never looked back.”

The streak began in ’76. While teaching at North Texas State, Daddy-O created “Bicentennial Map of the U.S.A.,” a football-field-size earthwork that was included in Dallas’s Bicentennial celebration. The map “about killed me,” he said, but in return it earned a two-page spread in People magazine. The following year, Daddy-O was invited to enter a piece in the Paris Biennale. He submitted the “Texas Mobile Home Museum,” a 1947 Spartan trailer coach occupied on the inside by a taxidermied bucking bronco, upside down, and a two-headed calf, among other oddities. 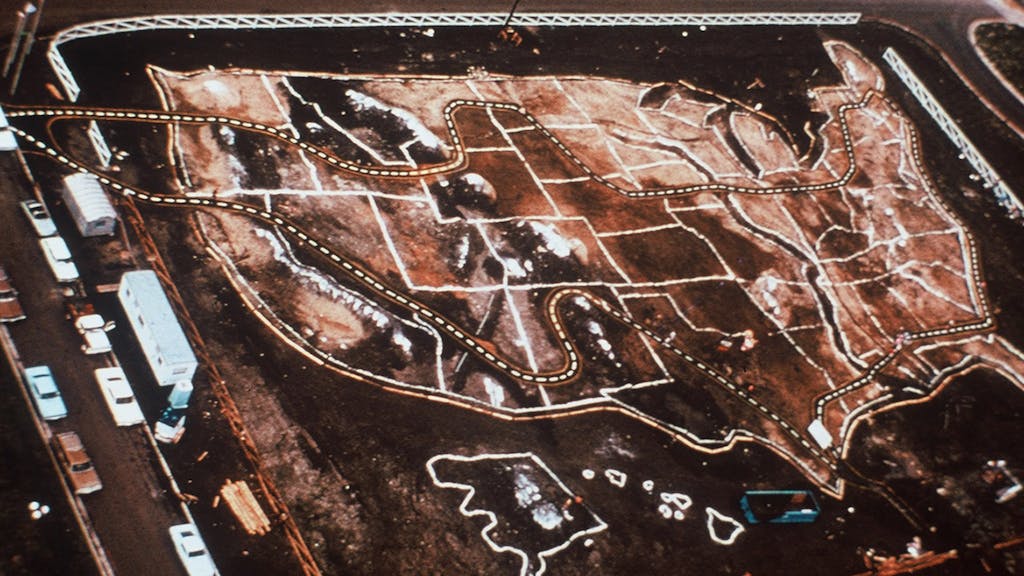 Daddy-O was just getting warmed up. In 1978, during a summer program at Art Park near Niagara Falls in upstate New York, he created a forty-foot-long, wire-mesh-and-polyurethane-foam sculpture of an iguana named Iggy. Later residing atop the roof of the Lone Star Cafe, in Manhattan, Iggy hosted Texans like Larry L. King, Dan Rather, and Ann Richards along with performances by George Strait, Willie Nelson, and Roy Orbison. In 1989, when the cafe closed, Iggy went into storage for more than twenty years, finally reappearing in 2010 atop the hospital building of the Fort Worth Zoo. 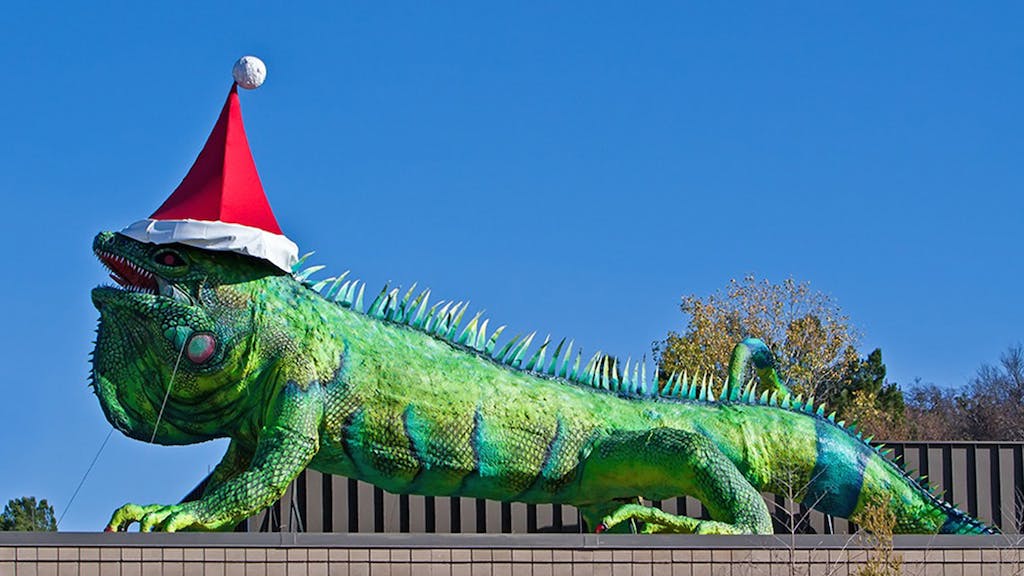 Most artists would have been satisfied after three famed monuments. But Daddy-O’s record-setting achievement still lay ahead. In 1979 the Washington Project for the Arts, after seeing Iggy, contacted Wade with a commission. The nonprofit had access to an empty lot three blocks east of the White House, where it planned to regularly feature public art. The organization wanted Daddy-O to be their inaugural artist. Urban Cowboy, John Travolta’s mechanical bull–riding movie, was a year away, but already “Texas chic” was making its way into the national lexicon.

“You had a lot of cowboy boot stuff happening in New York and people wearing fringe and cowboy hats and Western wear,” Daddy-O said. “Seventy-eight was right about when it was really happening. And then the precedent prior to that is you had people like Sam Rayburn, Speaker of the House, from Texas. You had LBJ, who was up there. All these guys always wore their cowboy boots and their little hats. So there was a so-called Texas presence in the D.C. political scene. And you put all that together and say, well. . . ”

That set the stage and inspired Daddy-O to create a honking-big pair of ostrich cowboy boots, as in forty feet tall and thirty feet long, give or take. He chose ostrich for its textural effect and because the skin is “more flamboyant and more Texas.” Daddy-O built the boots with much the same materials that he used for Iggy but included salvaged steel beams from razed buildings in D.C. for the base. The boots were eventually acquired by the Rouse Company, which owned the North Star Mall in San Antonio. In January of 1980 the boots were moved to the grounds of the mall to help revitalize the then-failing operation. The pair attracted the wide eyes of vehicles passing by on busy Loop 410. It also attracted the attention of Saks Fifth Avenue, which subsequently moved into North Star Mall, right next to the boots.

Just the kind of attraction that the selfie generation looks for, the boots have been featured on “The Bachelorette” as well as in numerous print ads and commercials, including an upcoming campaign from Jolly Green Giant. Even better, Saks Fifth Avenue creates snow globes featuring landmarks in cities in which the stores are located and included the boots in the San Antonio iteration. In 2015 the boots hit the big time when the Guinness World Records recognized them as the Largest Cowboy Boot Sculpture. 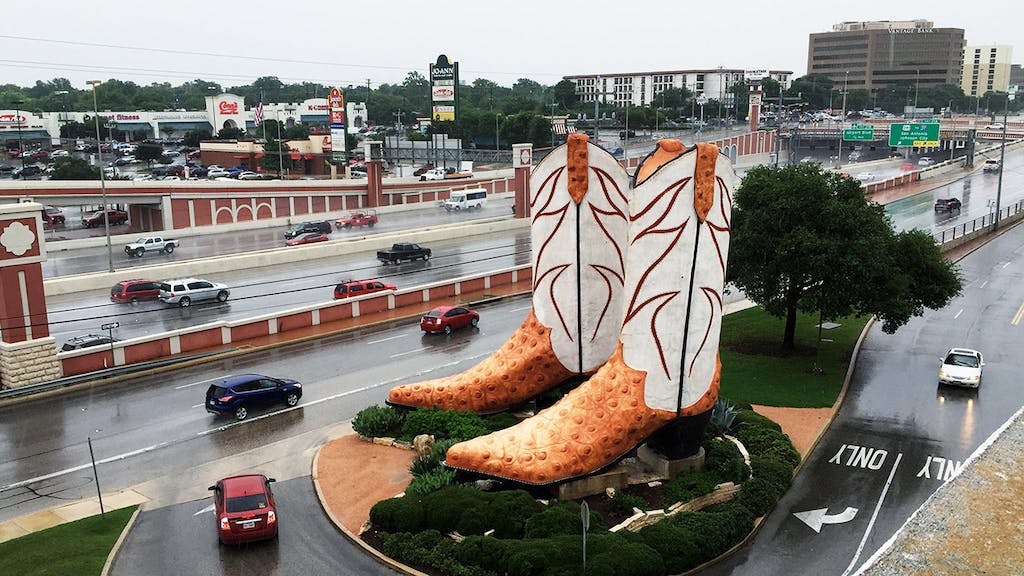 From now until the end of the year, last-minute shoppers will enjoy a photo opportunity of the boots all lit up for the holidays. An estimated eight thousand red and white LED lights form stars that blanket the boots from top to bottom. You can park your car, walk right up, and say cheese. For added effect when sharing the photo with others, consider this story.

In the first couple of years the boots were at the mall, a country and western DJ would broadcast live from the top of the boots during the San Antonio Rodeo. Onlookers could pull their trucks right up to the boots to tailgate. At some point, an excited partier kicked a hole in the heel, which opened the way for a homeless person to move in and set up camp.

“He was in there cooking on Sterno cans,” Daddy-O said. “He made little holes in the top of the end of the toe, where he hung out. A bunch of high school guys were hanging out with him, and I guess at one point there was just a lot of smoke coming out of the boot. Management thought the boots were on fire. And then they found the homeless guy.”

The boots, the iguana, the Spartan trailer, and the U.S. map are but a few of Daddy-O’s three-dimensional sensations. In Austin, where he now resides, Daddy-O can claim the New Orleans Saints helmet atop Shoal Creek Saloon, the school bus converted into a walk-up taco stand at El Arroyo, and the “hog” motorcycle at the South Austin Popular Culture Center. In Dallas, he created the dancing frogs at the Taco Cabana on Lower Greenville. In Marfa, he is behind the Bonnie and Clyde van. And yet there are many other creations. 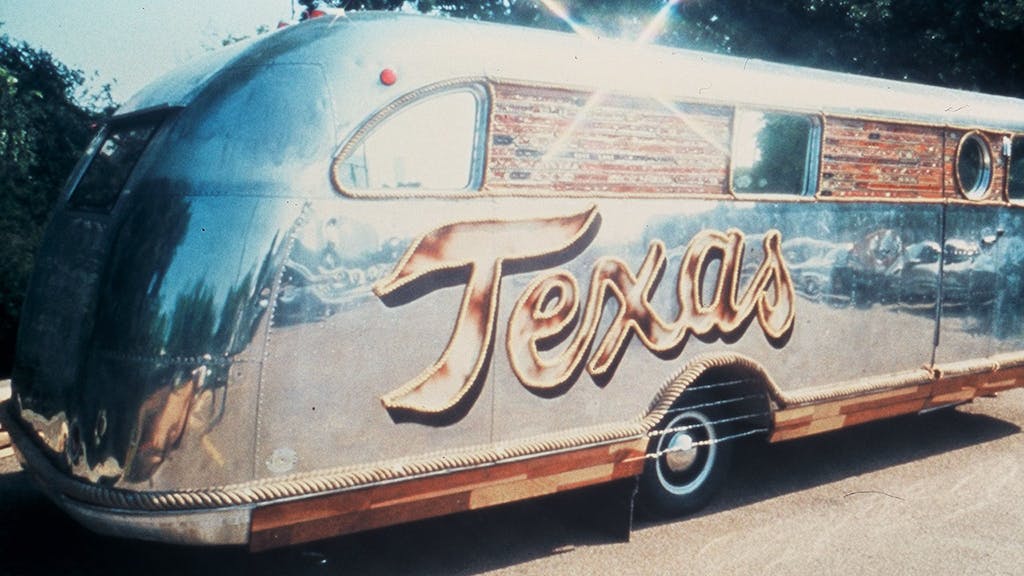 “His sculptures are an experience most Texans have already encountered before they know they’re a Daddy-O piece,” said Chip Tompkins, the Fort Worth director of a documentary on Daddy-O titled Flight of the Iguana, due out in 2017. “That was the case for me. I had known Iggy the Iguana, the boots in San Antonio, and the dancing frogs. All of these unbelievable sculptures I had no idea were connected by the same person. I believe with any of these sculptures, you have a natural intrigue into each individual story: Why is this here? Why is it so big? Who thought of this?”

Collectively, these pieces pay homage to Daddy-O’s childhood growing up in El Paso and Marfa. He remembers taking long road trips throughout West Texas and seeing weird roadside attractions. But as the big freeways started moving in, the attractions started disappearing. In a way, his art—shown in museums and galleries from coast to coast, including the prestigious Whitney Museum of American Art, in New York—ensures that those kinds of curiosities don’t become extinct.

In addition to sculptural works, Daddy-O has made a mark with his paintings. He takes vintage postcards or photographs and hand-tints them, giving the black and white a faint fluorescent glow. There are cowgirls, hula girls, and Pancho Villa and friends. Recently, Daddy-O unveiled a seven-foot canvas of a photograph of his famous second cousin, Roy Rogers, at the San Antonio restaurant Down on Grayson. For the 2015 opening of his 78704 Gallery, on South Congress Avenue in Austin, owner Matt Wayne exhibited a Daddy-O retrospective focused on these types of works.

“I think the thing that makes Daddy-O great is that you remember his work long after you see it because of the creative risks he takes to share Texas mythology,” Wayne said. “I’ll never forget watching with keen interest the joy and laughter Bob’s work was having on Ed Ruscha when he visited while he was in town for an event at the Blanton Museum. Ed is perhaps the most famous living American artist and he is also a fan and friend of Bob. More recently, I spent time with Marina Abramović, another international contemporary art icon, whom Bob co-exhibited with in Paris many years ago. During our conversation we discussed the man she called the ‘eccentric Texan.’”

In January Daddy-O will turn 74. But it’s no time for sitting back and reflecting; he’s got work to do. He’s in the middle of completing a public art piece on the grounds of Waterside, a new residential and retail development located in Fort Worth, near the Trinity River. The piece consists of a landscape of recycled kiddie rides, including tug boats, airplanes, and merry-go-round horses, that were left by the previous occupant of the land, the Lockheed Martin Recreation Association.

“The old man’s not through,” Daddy-O said. “I’ve got commissions. The Daddy-O doesn’t get to retire.”
North Star Mall, December 23–31, northstarmall.com

OTHER EVENTS ACROSS TEXAS

AUSTIN
Stand Tall
On November 2, disaster struck for Savannah Welch, an actress (Boyhood, Tree of Life) and a member of the Americana band the Trishas, when she was hit by an errant vehicle while shopping at the Wimberley Farmers Market and ultimately lost one of her legs. There is money to be raised, as well as spirits, and a good starting point is Friday with the Standing Beside Savannah Benefit Auction, to be held during the Legends and Legacies Holiday Show, which will feature local musical families, including Welch’s brother, Dustin, and father, Kevin.
Continental Club, December 23, 9 p.m., continentalclub.com

DALLAS
Top Brass
Tuba and euphonium players who might have been the objects of ridicule back in high school for playing such unglamorous instruments will have their day in the sun Friday at the Merry Tuba Christmas Concert. Some two hundred brass blowhards will gather in Thanks-Giving Square, in Dallas, to perform a free holiday concert that is bound to get those in the audience to reconsider the instruments they may have once derided.
Thanks-Giving Square, December 23, 12 p.m. facebook.com/events/1482656591749258/

HOUSTON
The Ebenezer Example
If the recent election results have got you down, attending the Alley Theatre’s annual production of “A Christmas Carol: A Ghost Story of Christmas” should give you a lift. This adaptation of Charles Dickens’s classic provides hope that even the most incorrigible among us has the ability to change for the good.
Alley Theatre, December 23–29, alleytheatre.org

HOUSTON
Knighting the Aggies
The Aggies were 7-1, with a loss only to perennial powerhouse Alabama, when quarterback Trevor Knight went down in week nine with a regular season–ending shoulder injury, taking with him the team’s chances for a top-tier bowl game. But the Aggies have a chance to go out on top in the Texas Bowl, with Knight’s return and a familiar former Big 12 foe on the other side of the line of scrimmage: the Kansas State Wildcats.
NRG Stadium, December 28, 8 p.m., advocaretexasbowl.com

HOUSTON / AUSTIN / SAN ANTONIO
Hoop It Up
Texans have their fair share of great basketball teams to watch with the Rockets and Spurs (sorry, Mavericks). Now add to that circumstance the Harlem Globetrotters, whose swing through the state next week will have rims trembling at the sight of Bull Bullard, a Texas A&M University-Corpus Christi graduate who finished second in the slam-dunk championship at the 2008 Final Four.
Various locations, December 26–29, harlemglobetrotters.com