Mike Tangman, the owner of Alamo Springs Café, likes to say his place is “a mile and a half from the middle of nowhere.” Not exactly, but it is off the beaten path, outside of Fredericksburg. That doesn’t stop customers from lining up at the door, though, especially between May and October, when supper (try the green-chile cheeseburger) is followed by a grand show: millions of Mexican free-tailed bats emerging before sunset in search of their supper.

Just across the cafe’s parking lot is an abandoned railroad tunnel, part of the Fredericksburg and Northern Railway line, which closed in 1942. Repurposed by nature, this bat cave of sorts is now Texas’s smallest state park, where a spinning monolith of aerial critters—some traveling as high as 10,000 feet and as far as 60 miles and back—issues forth into the sky. Burgers and bats: it’s like going to a fancy restaurant and a Broadway show—only better.

Bob Phillips, the host of Texas Country Reporter, once drove from El Paso to Texarkana in a single day, just to see if he could. 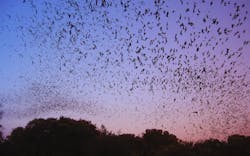 Can Texas Bats Be Saved?