For most of the pandemic, it was possible to stroll around outside and forget how terrible everything was for half an hour—for a whole hour, even, if you didn’t check Twitter.

On a sunny Friday in October, a month after the Houston Botanic Garden opened, its 132 acres were teeming with visitors seeking solace in the natural world. A couple on a first date chatted among the thorny phalli of the Cactus Garden. A man walked slow laps in the grassy Coastal Prairie area. Two older women, sitting at a table next to the gift shop, fretted about herd immunity. (“In Sweden they did no masks, and it worked for them,” one said, “but they must have closed the borders too.”)

The garden looked young—the shrubs were still self-contained and the fruit trees looked a little precarious—and healthy. In one garden, bird of paradise flowers had emerged in bright bursts of orange; pert cactuses and girthy palms in the Global Collection baked happily in the sun; the herbs in the Culinary Garden were popping. After a summer of mundane repetition at home, I was overstimulated even by the peaceful surroundings. I felt like pasty, neurotic Colin Craven in The Secret Garden, braving the spores and sun for the first time.

When I return in March, almost two weeks after severe winter weather blindsided the state, the garden is quieter. The sky is overcast and the air is humid. At first glance the landscape looks like any northern garden in the winter: brown and spare. But up close a dissonance creeps in. These plants aren’t supposed to be brown and spare in the winter. Palms aren’t supposed to look so crispy; succulents aren’t supposed to be so soggy-looking (when the water they store in their cells freezes, the cells can burst). This winter’s assault on our flora is not the gravest plague the past year has dished out, but it is a low blow. It’s very hard not to look at a slimy, deflated succulent without your meme-addled mind chiming in: “Mood.”

Still, the garden has enjoyed a steady stream of guests in spite of the damages inflicted by the freeze. Some have made repeat visits in recent weeks, to see the garden’s recovery in stages. But the bleak weather has kept many visitors away today. One family of three sits quietly at a table in a corner of the sheltered pavilion near the entrance. Justin Lacey and Brent Moon, the garden’s communications tsar and its horticulture manager, respectively, sit at a table in the opposite corner.

Lacey is very slim, and he wears an HBG-branded T-shirt and an HBG-branded mask. The lenses of his glasses, in thin silver frames, continually fog as he speaks. Moon wears a windbreaker that he removes every time the sun peeks out, then puts back on when the cloud cover returns. He sits far back in his chair as they discuss the days before the storm.

Moon watched with concern as the forecasts dipped to 28 and 29 degrees: that’s already cold enough to damage tropical plants. When the forecasts dipped below 20 degrees, he despaired. The staff hurried to buy frost cloth and other protective materials, social distancing in Home Depot with the rest of Houston. “Everybody around the city is trying to do the same thing. We’re not special. No one’s going to give us something just because we’re the Botanic Garden,” Moon says. But he and his staff were able to cover most of the plants, and they moved what they could indoors. Some potted citrus trees spent a few days in the gift shop.

Moon has been a horticulturist in Houston long enough to accept the mandala-like precarity of the work. (On climate change, he is firm but not aggressive: “I don’t like to get into a huge debate with people; I just don’t see how people can’t think it exists,” he says. “I’ve been doing this for twenty-five years, and I think it seems like weather events are getting more extreme.”) He was working for the Houston Parks and Recreation Department in 2011, when a severe, prolonged drought killed hundreds of trees in Memorial Park, and he has weathered many hurricane seasons. So when he and his staff uncovered the garden’s plants days after the storm, he had already girded himself. Lacey, who had no horticulture background prior to joining HBG, says he was “very emotional.”

Soon the sun comes out in earnest, and the two leave the pavilion to give me a tour of the garden. Moon, placid in his chair, now charges from plant to plant, rattling off plant names and facts very quickly.

First we visit the Corner of Curiosity, a hillock dotted with cycads, which are sometimes mistaken for palms. Today most of them look browned and stunted. Lacey lopes up the path and stands next to one of the larger cycad stumps. “Revel-oo-ta …  mishel-ee-tzee,” he says slowly, reading from a placard next to the cycad (a revoluta x micholitzii). “One of the most ancient plants in the world,” Moon says, joining Lacey. Moon had worried for this cycad in particular because it was the most valuable in the garden: though most plants in the collection cost under $100, several of the cycads cost over $1,000.

In October this cycad was lush and Jurassic-looking, but before the storm Moon and his staff had cut its annual flush of leaves back so they could cover it. In the nude, with just a scattering of pale yellow leaves, it looks brittle and even more prehistoric. A dozen perfectly straight stalks shoot out from its heart, each lined with uniformly spaced, vicious thorns. Moon peers down at it. “It might be a number of years before some of them get back to looking like we’d like them to,” he says.

His message to visitors seeking advice for dealing with a dead-presenting plant is: wait. He understands the impulse to rip out a blight by the roots—“Nobody wants to see this in your yard, you want to yank it up,” he says, pointing at a cut-back elephant ear fig tree—but many victims may still bounce back. Even this husk of a cycad.

Lacey estimates that two thirds of the 20,000 plants in the garden are in the “wait and see” category, and the other third are either “probably dead” or “probably survived.” It’s too soon to say how much of the collection will need to be replaced. As with any mass casualty, how a plant weathered the storm seemed in many cases to be a matter of luck. In the Cactus Garden, one fence post cactus looks green and barely damaged. But two feet away, another similar cactus has turned completely black, with leprotic splotches of white. It smells fetid, even through a mask.

Lacey worries for the golden rat tail cactus in particular. In October the cactus was a beautiful greenish-gold, like an eye color, with a hundred branches growing upward out of its pot. It looked like an undersea plant, and it was the belle of the ball on Instagram. It still looks extremely cool. Its branches stand upright for about a foot, then swoon limply—like Medusa’s hair, Lacey points out.

Other denizens of the Cactus Garden have turned a deep purple, and some slender pale cacti nearby have begun to curl inward at the top, making surreal spirals. Lacey stops to admire them. He has the unique challenge of marketing to visitors a garden in recovery, but he’s fantastic at it. He points out how the acoustics in the tropical garden have changed now that many of the leaves are dead; he notes that it is now much easier to appreciate the “hardscape,” the stone pathways that wind through the garden. “There is more to the garden experience than just plants,” he says.

“Here’s a good sign, Justin!” Moon bellows at Lacey from a little farther down the path. Lacey hurries over to where Moon is pointing down at a cestrum—typically a leafy, flowering plant; today this one is a tangle of brown. But, Moon points out, a cabbage-shaped shoot of green is emerging from the ruins. Lacey has already whipped out his phone, and he lowers himself into a lunge to shoot photos of the new growths. He has been sharing signs of life on Instagram to encourage the masses.

Compared with the other disasters on the carnival wheel of Texas weather, Moon says a winter storm is “fairly small potatoes.” He’s already looking ahead to hurricane season. At least after this freeze, Moon says, they’ll likely have some time to recover, whereas a garden can be hit with multiple hurricanes in a season. And at least, Lacey adds, the garden still has “some verticality.”

When every year is marked by a historic natural event—wildfires in California, severe cold in Texas—planting a botanic garden in Houston, a city whose climate is often tempestuous, seems like courting doom. Why do it at all?

“We’re going to get little hits here and there,” Moon says. “But the value that a place like this provides to Houston and the region at large, I think, far outweighs the risks.” Moon’s grand hope is that the collection will embolden visitors to get into gardening themselves, mitigating the effects of climate change in their own small way. “Every little bit we grow helps.”

In a few months, Moon says, visitors won’t be able to tell that anything dramatic happened in the garden. And until then, it’s still a peaceful respite from the city—a place to be people-adjacent with a pretty low risk of contagion—and a darkly beautiful lesson in patience. 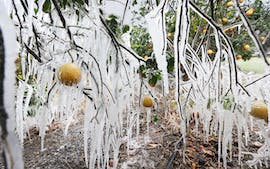 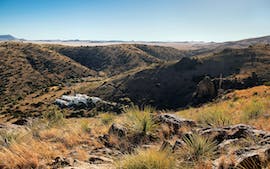