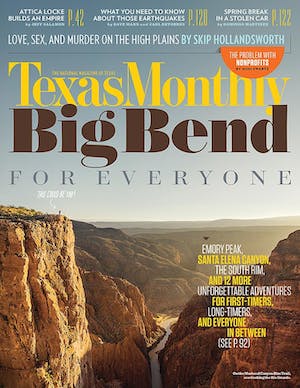 The joy of riding through Hermann Park on a miniature train never grows old, even if you have. You pay your $3.25,climb aboard, and—whether it’s your first time or your fifty-first—feel a kick of childlike enthusiasm as the wheels start. The 445-acre park is the queen of Houston’s green spaces. It’s not the largest in town, nor does it have the national name recognition of other local landmarks, but it’s a verdant nucleus of some of the city’s best-loved attractions, each worth its own visit. Cruising along at about 8 miles per hour, the little red locomotive passes the Houston Zoo and the Houston Museum of Natural Science, the Japanese Garden and Miller Outdoor Theatre, McGovern Lake and the 740-foot-long reflecting pool just beyond the towering bronze sculpture of Sam Houston atop his striding horse. The twenty-minute ride is over too soon, but when you disembark you can slip away to the recently unveiled McGovern Centennial Gardens. When this exquisite meditative landscape opened in the fall, it marked the culmination of the original vision for the park—one that’s been in the works for a hundred years.

To love Hermann Park is to be in it for the long haul. It’s been a work in progress since 1913, when it was included in Houston’s very first planning document. George H. Hermann, a wealthy cattleman and industrialist and the sole heir to his family’s real estate fortune, deeded the heavily forested land to the city shortly before his death, in 1914, insisting in his will that the parcel be maintained for the “health, comfort, and happiness” of his fellow Houstonians. And for a long while it was.

As it first took shape, Hermann Park looked unsurprisingly similar to New York City’s Central Park, which looked unsurprisingly similar to the public promenades of Europe then in vogue. Like most in the country at the time, landscape architect George E. Kessler, who was tasked with designing Hermann Park, was swept up in the City Beautiful movement, whose adherents believed that sprucing a place up would cultivate sorely needed civic pride and inspire its citizens to spruce themselves up, morally speaking. Kessler’s blueprint for the park was maximized for delight: a lake lined with pergolas; a swimming pool and bathhouse; an elliptical sunken garden; a long, tree-flanked reflecting pool. But then war broke out and the Depression hit and progress slowed.

By the eighties, Hermann Park was less than beautiful. The reflecting pool, never quite completed, was a mucky ditch. The grounds were underplanted and overused, the tree canopy troublingly thin. Traffic was a nightmare, particularly on evenings when Miller Outdoor Theatre was staging its free shows. Safety was iffy. The park had lost its purpose. It had become less a recreational respite than a spate of disjointed spaces wedged between the Museum District and the Texas Medical Center. Only about 17 of its 445 acres didn’t require an admission fee of some sort. Meanwhile, the city was struggling with its own identity crisis in the wake of a fresh oil bust; with more than three hundred parks to tend, there wasn’t enough money to go around.

Still, something was sprouting in the park. Residents of the nearby Warwick Tower took it upon themselves to rake up leaves and fish trash out of the lake. A postal carrier who lived in the neighboring Third Ward district, intent on reclaiming the overgrown carriage path for his fellow runners, brought a sickle and started hacking away. The former dean of Rice University’s School of Architecture, O. Jack Mitchell, who considered Hermann Park to be Houston’s most important civic space, opined in a 1992 issue of Texas Architect that “the making of a quality public realm” would be nothing less than “the symbol of our collective, communal lives.”

When Mitchell died of a heart attack shortly after that call to action was published, his friends knew exactly what passion project they could pursue in his honor. That same year, three groups of concerned citizens banded together to form the Friends of Hermann Park (since renamed the Hermann Park Conservancy) to raise funds. In 1995 the city approved a master plan that included $25 million worth of upgrades to turn the park into the cohesive urban refuge it was always intended to be. Lauded landscape architect Laurie Olin was brought in from Philadelphia, and he and his team drew on Kessler’s old scheme to create “a park both greener and bluer” by crafting a great lawn, expanding the lake, and reclaiming a hundred acres of bayou parkland, among other nips and tucks.

Since then, the splendor of Hermann Park has proliferated like wildflowers in the spring. Every year or so, there’s been something new—or improved—to love. Three islands (two just for the birds) were added to the enlarged McGovern Lake in 2001. Two years later, the reflecting pool was (finally) properly edged in stone and lined with double allées of mature live oaks. The O. Jack Mitchell Garden, a tranquil pocket with a small fountain, was dedicated in 2004. By 2009, the 52-year-old railroad was outfitted with a new train and longer tracks. In 2012 a cyclist-friendly suspension bridge was built over Brays Bayou.

Last fall, to mark the hundredth anniversary of George Hermann’s gift—and the culmination of two decades of enhancements—the conservancy debuted the fifteen-acre Centennial Gardens, the park’s pièce de résistance. An ensemble of horticultural “rooms”—oblong beds of agaves and yuccas, a semicircular rose garden, a winding path of azaleas and camellias, a community produce garden—flank a long lawn that’s the length of a football field but not intended for anything rowdier than counting the clouds. The grassy expanse is bookended by five jet fountains cascading into a large pool at one end and a tiered waterfall gushing down the side of a thirty-foot-tall mount at the other. You can walk up a spiraling sidewalk to the apex of the small zoysia grass–covered hill, which was built like a layer cake, nine inches of cement-stabilized sand and planting mix at a time. The mount seems to be a good-natured rejoinder to Houston’s “bad case of the flats,” as Olin once put it. From the moment you enter the Cherie Flores Garden Pavilion—the gracefully symmetrical granite-and-glass gateway designed by Peter Bohlin (Steve Jobs’s go-to architect and the creator of Apple’s sleek storefronts)—you’re drawn toward the high ground.

But before you go in, look just to the left of the pavilion’s entrance for the sign demarcating the two-mile Marvin Taylor Trail. It was so named in 2003 for that sickle-wielding postal worker, who went on to help raise thousands of dollars to restore and relight (and reanimate) the overgrown carriage path. Taylor’s tireless petitioning and letter-writing campaign led to the installation of 52 lampposts, many along his favorite jogging route (and he was installed on the conservancy’s board). Just across from the sign bearing Taylor’s name is a bench. If it’s morning, you’ll likely see the man himself—ninety years old, hair white, running shoes worn in—sitting on that bench, saying hello to passersby and emanating the quiet pride that comes with loving and nurturing a place long enough to reap the sacred dividends of our collective, communal lives.