Pie in the Sky

A Different View of Abilene

By the end of my long late lunch at Rancho Pizzeria this past Sunday, I was about ready to pick up and move to Coleman. The tiny town (pop. 4,500), which is about an hour south of Abilene and a half hour west of Brownwood, is in the midst of a rebirth, and happens to boast one of the best new restaurants in Texas (in my humble, pizza-loving opinion). I’d been wanting to try Robert and Laurie Williamson’s latest venture ever since it earned this glowing review from our food editor, Patricia Sharpe.

Not surprisingly, nothing in my little feast—which included roasted piquillo peppers stuffed with goat cheese, a kalamata tapenade, a wood-fired arugula and prosciutto pie, an Eola School/Bright Brewing Scissortail Saison, tiramisu and an affogato—came close to disappointing. (Okay, so it wasn’t that little of a feast!)

The Williamsons, who’ve made a name for themselves with Rancho Loma, their five-room B&B and restaurant, in nearby Talpa, have even more up their sleeves for their adopted hometown (West Texans by birth, they were longtime Dallasites before moving here in 2000). They’ve got a number of other labors of love in the works, including a coffee shop, an art gallery, a farmers’ market, a barbecue joint, and a winery, all along Commercial Avenue, Coleman’s main drag. As Robert was giving me a tour of where the farmers’ market will go (they’ve torn the façade off of a long-empty corner building), he also pointed out where the food trucks and stage will be set up for the town’s inaugural Prickly Pear Festival, which will be going down on October 24. I’d heard rumblings about the event (which Brandon Rhyder will headline) when I was rooting around Abilene earlier that weekend, but, standing there on the empty lot and imagining all the excitement that’s on Coleman’s horizon, I began to solidify my own plans to return for the festival. And, who knows…maybe I’ll be towing a U-Haul with all my belongings too.

p.s. If you’ve got a hankering for a hamburger or a slice of pie, you’ll want to take a barstool at Owl Drug, an old-fashioned pharmacy (“Since 1923!”) that also sells gifts and Coleman Blue Cats gear (picked up a mesh-back gimme cap myself) and has a wall of signed portraits from Texas beauty queens.

Pie in the Sky

A Different View of Abilene 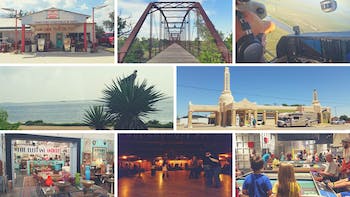 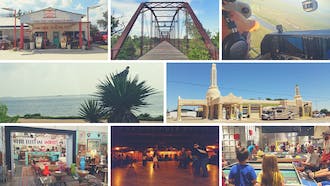