The Dallas Cowboys have a bye this weekend as they await the divisional round of the playoffs against the Lions or the Packers or the Giants on January 15. Still, Cowboys fans can experience plenty of action in the interim. On Monday, January 9, the Star, the franchise’s new headquarters and training facility in Frisco, opens to the public for tours. Built by the Jerry Jones family on land originally earmarked for Warren Buffett’s budget-conscious Nebraska Furniture Mart, which eventually settled in The Colony, the Star, like Arlington’s AT&T Stadium before it, was impervious to budgetary concerns.

The three-year project was a family effort, but Charlotte Jones Anderson, the Cowboys’ executive vice president and chief brand officer (and owner Jerry Jones’s daughter), was the driving force. Borrowing from her experience in building AT&T Stadium, considered the Taj Mahal of NFL stadiums with a cost of $1.2 billion, Anderson, one of only a few female executives in the NFL, in large part envisioned the design and expedited the development. She was involved in countless decisions, from facility details like signage, landscaping, and lightbulb type, to performance-enhancing features like the color of the field turf and the location of outlets in players’ lockers for use in charging their phones. Her father gave her a lot of freedom, she explains, but he was involved with every decision that required him to write a check. 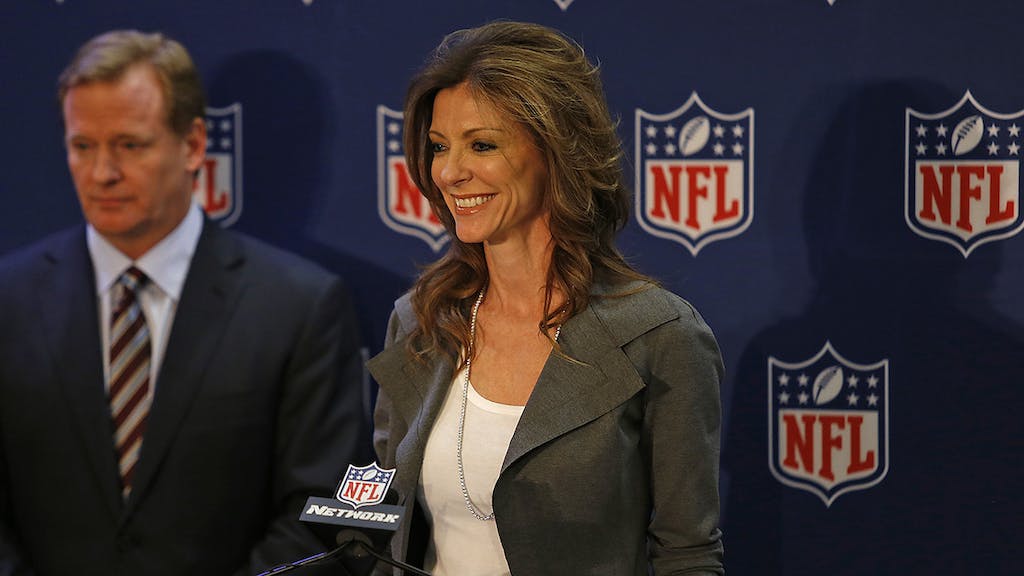 “I did have a run-in with him one time and it was because I hadn’t spent enough money on what the exterior of the building was,” Anderson says. As she explained to the Wall Street Journal, Jones had wanted a glass façade like the one at AT&T Stadium. Anderson told him they didn’t have the budget. He threatened to fire her if she didn’t make it happen.

“So we blew the budget,” Anderson says. “We spent another ten million dollars. We turned the front of the building into blue glass, and he got exactly what he wanted. He was certainly particular when it came to quality. And I think that has always been what has driven us. He’s a firm believer that you cannot mess up if you make everything quality. And this is a reflection of that.”

Anderson estimates that in its current state, the budget for the Star, a 91-acre campus that is more than a simple training facility, has exceeded its original $100 million budget by around $700 million. That’s right: the Jones family has already spent about $800 million on the headquarters and training facility, the plaza, the initial restaurants and retail, and the Ford Center, a 510,000-square-foot indoor athletic complex built in collaboration with the Frisco Independent School District and featuring a 12,000-seat stadium that the district’s nine high school football teams get to call their home field.

When all is said and done, Anderson figures the project will exceed $1 billion. So when you shell out $32.50 for a tour ($27.50 for seniors, military, and children), being offered 9 a.m. to 6 p.m., seven days a week, you should expect big things. AT&T Stadium certainly has set the bar high.

“Everything that has created success around the Cowboys we have turned back around and put it back into the team and into the facilities,” Anderson says. “And that was the trick here: How do you figure out how to pay for it or to set up some kind of structure around it so that you can afford to build what you are building? And we’re still working through that. But for now, we’re trying to make sure that we did it to an A-class level.” 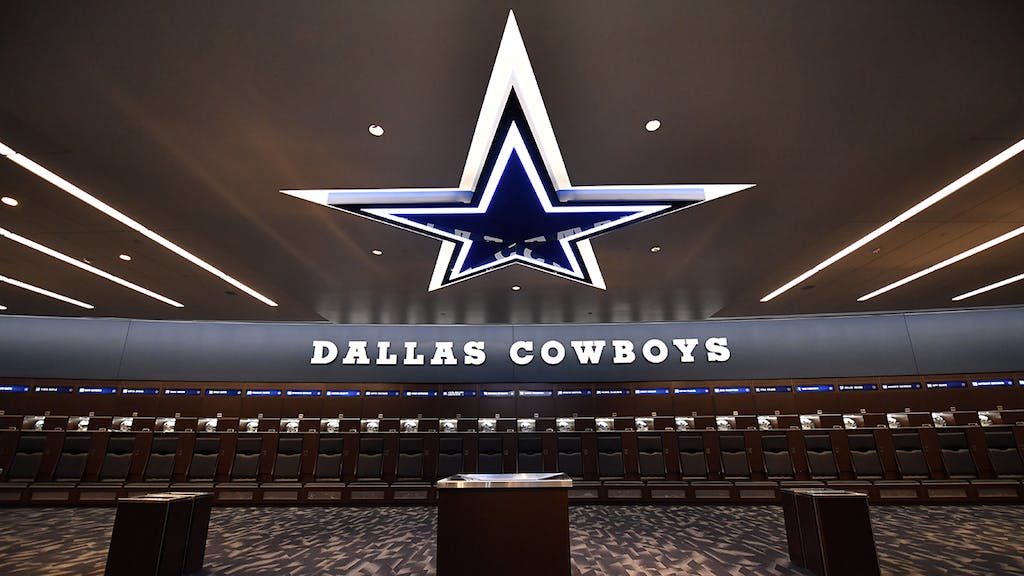 The Star serves two demographics in its pursuit of both optimal player performance and historical appreciation of the team. The first demographic target is, of course, the players themselves. Every detail in their realm was scrutinized and all of the latest and greatest technology, equipment, and resources are in place to operate on an elite level. The pathways from the players’ vehicles to the locker room, to the meeting rooms, and to the practice fields are highly orchestrated, complete with messaging from head coach Jason Garrett and others. The first things the players see upon entering the Star are the Cowboys’ five Super Bowl trophies. Next to those is a quote by Jerry Jones: “We must win. We will win. Win is the name of the game.”

The other demographic is, naturally, the fans. From a tour participant’s perspective, the team’s narrative, dating back to 1960, unfolds in various displays, starting first with a history by the numbers. From there the life of the typical player is told, beginning with draft day, which is enhanced by a sneak peek at the new “War Room,” to be used for evaluating prospects for the first time in the 2017 draft. Elsewhere, quotes from Hall of Fame and Ring of Honor (the Cowboys’ own version of a hall of fame) members adorn the Italian marble floors of the atrium, and odes to special players who helped build the team into what it is are currently displayed.

Also, as part of what’s called the Nike Star Walk, ten milestones in the team’s history are highlighted along with a comprehensive look back at the uniforms over the years. (Pop quiz: If five of these milestones are attributed to the team’s five Super Bowl wins and one each to Emmitt Smith breaking the all-time rushing record and Roger Staubach coining the term “hail Mary” with his game-winning touchdown pass during a 1975 playoff game, can you guess the remaining three?)

The Jones family had a longstanding relationship with the city of Frisco dating back to a project they’d worked on in the nineties together, when Frisco was barely a dot on the map with some five thousand residents. After Warren Buffett backed out of the Nebraska Furniture Mart plan, Frisco—now booming with some 150,000 residents—came calling. Money had already been allocated for a single stadium to be built to accommodate the school district. But adding a partner like the Cowboys could sweeten the deal.

According to Anderson, the city of Frisco approached the family. “This is a chance to be side by side with high school football,” city leaders told them. “Would you come and invest with us?”

The Cowboys purchased the property and the rest is history. The school district got a dream facility, with the opportunity for its high school players to mingle with their heroes. (A handful of pro players’ high school statistics lined up next to their NFL and AFL stats are on view at the Ford Center in what Anderson calls a demonstration to the younger players that “You too can reach your pinnacle with a lot of hard work.”) Meanwhile, the Joneses got an opportunity to create not just a glorified corporate office but also a town square of sorts. The idea is to capitalize on the rising local population and, through more development, cultivate what Anderson calls “the Frisco way of life.” 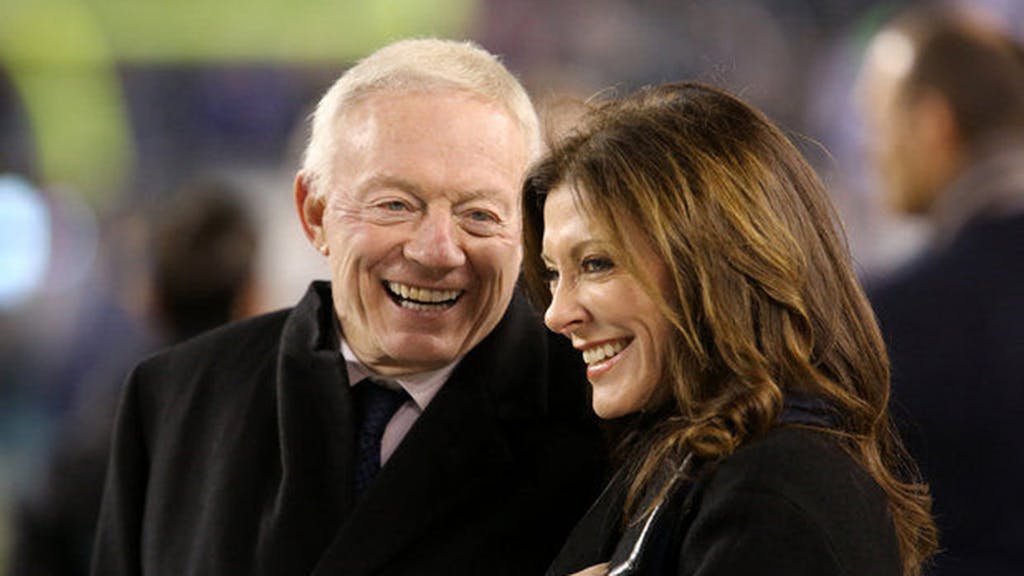 Anderson says her father wasn’t quite ready to dive into debt again when Frisco first made the pitch. Operations had finally stabilized at AT&T Stadium after about five years. The family had figured out a way to maximize the needs of the team with other revenue-producing concerns like touring concerts. But at the same time, they realized that they would soon need to either refurbish or rebuild Valley Ranch, the team’s existing headquarters and training facility—neglected while AT&T Stadium was being built. So they decided to go ahead and take the plunge.

They also took a cue from themselves, echoing the display of world-class art at AT&T Stadium. In the atrium of the Star is the first of what is hoped to be several commissioned pieces, by the New York artist Leo Villareal. Titled Volume (Frisco), it’s a continuously changing LED sculpture with more than 19,200 white lights embedded in 160 forty-foot-long rods hanging from the ceiling. “It’s pretty spectacular all day long,” Anderson says, “and it is pretty magical at night.”

Clearly the place was excellently built in order to command excellence. If the Cowboys fail to make a splash in the playoffs after two whole weeks preparing themselves at the Star, well, then they can’t make excuses. “As Coach Garrett says, this is a no-excuses facility,” Anderson says.
The Star, January 9, thestarinfrisco.com

Other Events Around the State

DALLAS / NEW BRAUNFELS / AUSTIN
Country to the Core
In an era of manufactured country, Dale Watson, the chicken-shit-bingo-playing Ameripolitan crooner, and Ray Benson, front man of the nine-time Grammy-winning western swing band Asleep at the Wheel, are purists. Proof of this is Dale & Ray, their new collaborative album featuring mostly original songs plus a Willie Nelson cover, which the Austin musicians will promote with three shows this weekend.
Various locations, January 6, 7 & 8, daleandray.com

DALLAS
Modern Warfare
You may never passively look at a drone in the same way again after experiencing the heralded one-woman play Grounded, by George Brant, a graduate of the prestigious Michener Center for Writers at the University of Texas, in which a female fighter pilot, balancing duty and family, targets terrorists with the miniature unmanned aircraft from a trailer outside of Las Vegas.
Bryant Hall at Kalita Humphreys Theater, January 11 to February 4, secondthoughttheatre.com
FORT WORTH
Hot on the Trail In celebration of the 150th anniversary of the Chisholm Trail, the cattle-drive route between Kansas and Texas that helped give Fort Worth its Cowtown moniker, the Sid Richardson Museum is hosting the exhibition “Hide and Horn on the Chisholm Trail,” featuring an array of collectors’ items including guidebooks, maps, and “The Texas Steer,” Charles M. Russell’s bronze sculpture of a Longhorn. Sid Richardson Museum, January 6 to May 28, sidrichardsonmuseum.org

HOUSTON
Life-size Lite-Brite
The first weekend after New Year’s can be a real letdown, with seemingly nothing going on. But Discovery Green has your back with the final days of “Firmament,” an outdoor installation built for the 2015 Burning Man Festival by artist Christopher Schardt, where spectators can spend hours lying under a dazzling 52-foot-wide canopy of 21,600 LED lights, suspended from a 42-foot-high aluminum tower.
Discovery Green, January 6–8, discoverygreen.com

SAN ANTONIO
Brew Me
Coffee used to have a bad rap but increasingly studies have shown its positive effects, from lowering one’s chances—relative to non-coffee-drinkers—of developing type 2 diabetes, Parkinson’s, certain cancers, and heart problems, according to WebMD. That means the San Antonio Coffee Festival, where you can learn about and taste more than thirty locally brewed coffees, is a good way to start the new year on a health-conscious note.
La Villita Historic Arts Village, January 7, 10 a.m., sanantoniocoffeefestival.com