Most summers, the 367 miles of Texas that front the Gulf of Mexico offer a stunningly scenic backdrop for a much-needed beach getaway—the fine white sand, the deep blue-green ocean, the cloudless sky dotted with a smattering of gulls gliding effortlessly upon a gentle sea breeze. Caw. Caw.

Then there’s this summer, when ghastly heaps of smelly, decaying seaweed have overrun our sandy playgrounds. Miles and miles of beach have been covered in the fetid flotsam, and getting into the water sometimes requires wading into a briny mush the consistency of warm coleslaw.

The seaweed, or gulfweed, or sea holly—actually a golden-brown algae known as sargassum—is no stranger to Texas. Every year it rides a loop from its namesake Sargasso Sea, in the lower north Atlantic, through the Caribbean and into the Gulf via the Yucatán Strait. Once in the Gulf, it grows happily in the nutrient-rich waters before landing on South Padre Island in January and February and then moving up the coast gradually, with the seaweed season usually ending in Galveston and points north near the end of July.

According to Robert Webster, a doctoral student and research assistant at Texas A&M University at Galveston who studies sargassum, this year’s anomalous and unsightly barrage likely came compliments of some late cold fronts, which kept the sargassum offshore, where it got to spend even more time in the Gulf soaking up nutrients and growing. When the winds turned shoreward, the massive mats of sargassum began to make landfall. “Every thirty years or so Texas experiences about seven to nine years of heavy sargassum,” says Webster. “We’re coming to the end of one of those cycles, and this spring’s weather pattern helped to create a sort of perfect storm.”

Jake Dubose, who works at Island Surf Rentals, in Port Aransas, says the large slicks of sargassum first arrived on his stretch of shore in May. “At the beginning of the season it was really, really bad. It was everywhere,” complains the eighteen-year-old Port A surfer. “Then, in mid-June, it came back really, really thick. We’ve had some rental returns because of it. Surfers just aren’t going out as much.”

Webster, for what it’s worth, notes that though surf shop owners and hotel managers may see the seaweed deluge as a sign of the end times, it’s actually beneficial to the Gulf and the beaches. “It creates an oasis for marine life, it’s a great place for birds to feed, and it helps control beach erosion,” he says. “Every part of the environment wins. Except tourists.” 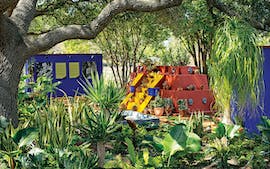