Michael Corcoran likes working with dead people. The Smithville-based music writer—who was a longtime fixture on the pages of the Austin American-Statesman—has spent the second half of his roughly forty years in journalism discovering Texas musicians who died decades ago, and who recorded their songs nearly a century ago.

Back in 2004 Corcoran brought to the forefront the relatively unknown story of Blind Willie Johnson, a bottleneck guitar–playing street performer whose songs have been covered by Led Zeppelin and Bob Dylan, in his article “The Soul of Blind Willie Johnson.” This led to Corcoran authoring the liner notes for God Don’t Never Change: The Songs of Blind Willie Johnson, the 2016 compilation album produced by Alligator Records and nominated this year for two Grammys. In 2012 Corcoran unearthed another innovative black performer in his book He is My Story: The Sanctified Soul of Arizona Dranes, which accompanied a Grammy-nominated reissue by Tompkins Square of music by Dranes, a relatively unknown female Pentecostal piano player who was blind and whom Thomas A. Dorsey, the musician generally regarded as the “father of gospel music,” cited as an influence. And just this past year, Corcoran completed his trifecta of profiles of pioneering gospel musicians with his book Washington Phillips and His Manzarene Dreams, which was paired with a reissue by Dust to Digital of music by Phillips, a “jackleg” or armchair preacher who played a mysterious homemade instrument.

“I think that these three musicians really influenced maybe ninety percent of the music that came after them,” Corcoran says. “Arizona Dranes, she invented the gospel beat, which was basically the rock and roll that came later. Then you had Blind Willie Johnson, who was maybe the first guitar hero. And then you had Washington Phillips, who I think really kind of started the singer-songwriter genre. His music, unlike most of the music of the era, was primitive in a way, but also very sophisticated.”

This Saturday morning, Corcoran will host a discussion and book-signing for Washington Phillips and His Manzarene Dreams. The event will take place in the community center in the East Texas town of Teague, near where Phillips lived as a farmer in Simsboro. Corcoran first wrote about Phillips back in 2003, in his Austin American-Statesman article “Exhuming the Legend of Washington Phillips.” The piece was included in the 2003 De Capo Best Music Writing anthology, and the venerable music critic Greil Marcus included the story in his curriculum for a class at the New School, in New York. Needless to say, music nerds were frothing.

“I think the thing that sets Washington Phillips apart from the other gospel music from the twenties was the introspective lyrics,” Corcoran says. “He’s writing about God and religion in a real kind of cynical way, in addition to his devotional way. Like ‘Denomination Blues,’ his most famous song—there’s the line: ‘You can go to college/You can go to your school/But if you ain’t got religion, you’re an educated fool.’ He thought these guys that were ordained preachers were not as holy as he was. Just because they got a degree doesn’t mean that they knew more than him.”

Corcoran, also the author of the 2005 book All Over the Map: True Heroes of Texas Music, heard Phillips for the first time around 1999, on a compilation titled Amazing Gospel. He had never before listened to a song quite like “A Mother’s Last Word to Her Daughter.” He described it as “rural originality,” a yearning voice trying to connect, aided by an instrument that sounded like a child’s music box, or as he recalls, another critic’s description was “heaven’s ice cream truck.”

A year or two later, Corcoran purchased the Phillips album I Am Born to Preach the Gospel, a 1992 compilation by Yazoo Records, reissued by Yazoo in 2005 as The Key to the Kingdom. The liner notes said that Phillips had died in 1938 while at the Austin State Hospital. Corcoran found the Austin connection that he needed to secure the assignment. He spoke with a state hospital official who told him that Phillips got into some sort of land dispute with his brothers and started hearing voices; eventually he left his family and moved into a chicken coop. So one of his brothers had him committed. All of this was juicy information. The only problem was, it was a different Washington Phillips altogether.

Corcoran finally realized he’d heard about the wrong man during a reporting trip to Freestone County, where Phillips had lived. He interviewed relatives of both men named Washington Phillips, who turned out to be cousins, and they set him straight. This enabled Corcoran to locate the death certificate of Washington Phillips, the musician, who died not in 1938 but instead in 1954, from a fall he sustained while at Teague’s city hall. That was the first mystery that Corcoran solved.

The second mystery was the actual instrument that Phillips played. Many believed it to be a dolceola, a type of keyboard that is played by pressing keys, like a piano. In fact, various liner notes said as much. But Corcoran asked Phillips’s relatives how he played his instrument and they mimicked him plucking strings. Corcoran realized it couldn’t have been a dolceola. He surmised that it could have been a zither, a box fitted with strings that are played with one’s fingers. Corcoran wasn’t one hundred percent sure, but he was going to find out.

“Because I had found this case of mistaken identity, I had this real responsibility, I felt, to get all the information correct on this guy,” Corcoran says. “Like I would be the one that everybody looks to and says, ‘Okay, his stuff’s real. Everybody else’s stuff is bullshit.’”

After the Statesman article was published, Corcoran continued visiting Freestone County every couple of years to snoop around. Around five years ago he discovered another cousin of Phillips’s and went to interview him, but it was a total bust and he came away with nothing. Then on the drive home to Austin, Corcoran got a speeding ticket. It had been a bad day, but he was determined to get something positive out of it. He immediately set off for the Texas State Library, resolute on finding something, anything, on Washington Phillips, this musician described as mystical, a charlatan, otherworldly, who seemingly arrived fully formed in a Dallas recording studio in the late twenties to record eighteen songs.

At the library, Corcoran discovered a 1907 article in the Teague Chronicle that talked about Phillips making his own instrument, called a manzarene. Essentially, Phillips had connected two zithers to create a single piece. Corcoran posted the article on his personal website, where it caught the attention of Lance Ledbetter of Dust to Digital, the Grammy-winning Atlanta-based record company that mines the history of American popular music. Ledbetter had previously released a few songs by Phillips on a compilation. But he wanted to put together a standalone package that elevated the overlooked talent. He provided the resources for Corcoran to do additional research and complete the 76-page book, which Ledbetter paired with a sixteen-song collection. 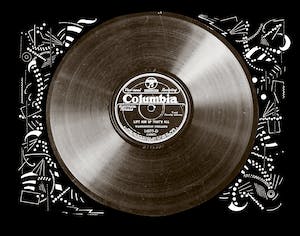 When Corcoran speaks this weekend in Teague—a town of about three thousand, where Corcoran says a rebel flag on display is not uncommon—there is a good chance he will meet a new subject from the area who may turn him on to new information about Phillips. That’s the exciting part for Corcoran: the limitless possibilities of reporting on gospel music, a rich genre that’s not capitalized on by many music writers.

“When I was working on the Blind Willie Johnson article, I visited with Mack McCormick, in Houston,” Corcoran says. “And Mack McCormick is probably the greatest music researcher of our time. I was asking him all kinds of questions and when I mentioned something about Arizona Dranes, he goes, ‘I don’t know anything about her.’ He said, ‘I don’t really know much about gospel music at all.’ And that’s when I went, ‘Okay, I’m going to be a gospel expert. Because this guy knows everything else.’”
Teague Community Center, January 28, 11 a.m., michaelcorcoran.ne

AUSTIN
365 Days of Christmas
People were so accustomed to being able to celebrate Christmas year-round at Lala’s, the beloved Austin dive bar where wreaths, tinsel, and candy canes went up in 1972 and never came down, that when the original owner retired in 2015, neighbors ran to rescue the establishment from going out of business. On Tuesday belly up to the bar with a cold one at Lala’s Little Nugget, as it’s now called, and hear its saviors’ story as part of Preservation Austin’s monthly “Jugging and Jawing” series.
Lala’s Little Nugget, January 31, 6 p.m., preservationaustin.org

DENTON
BFF
The success of TV shows like Atlanta, Blackish, and Empire and movies like Fences, Hidden Figures, and Moonlight suggests that black entertainment is, in fact, American entertainment. At the Denton Black Film Festival, see what other quality programming is out there, such as The Example, set amid a race riot in Beaumont in 1943; Jackson, an abortion documentary by Texas native Maisie Crow; and Forgiving Chris Brown, which is making its Texas premiere at the fest.
Various locations, January 27–29, dentonbff.com

HOUSTON
To Bey or Not to Bey
Beyoncé’s career exploded after her role in the movie Dreamgirls, in which she played Diana Ross, one third of the Supremes. Will the same hold true (albeit on a much smaller scale) for another Houstonian, when Theatre Under the Stars hosts open auditions for its stage adaption of Dreamgirls in Queen Bey’s hometown?
The Hobby Center, January 27 at 5 p.m. & January 28 at 2 p.m., tuts.com

HOUSTON
Into the Wild
For those who think President Trump’s dismissal of the existence of climate change spells doom for the environment, consider the Houston Museum of Natural Science’s exhibition featuring images from the Wildlife Photographer of the Year contest, including almost 50,000 entries from professionals and amateurs across 95 countries. It could be one of the last few glimpses of some of Mother Nature’s quickly disappearing good looks.
The Houston Museum of Natural Science, January 27 to June 4, hmns.org

HOUSTON
Up Your Alley
As Hamilton proved, if you sleep on promising theater too long, you may never experience it at all. The Alley All New Festival is an entry-level opportunity to experience theater with potential, including a reading by Kenneth Lin—a writer for the Netflix series House of Cards—of an adaptation of Mark Twain’s The Adventures of Huckleberry Finn; a workshop performance of The Carpenter, by Robert Askins, the Houston playwright of the Tony-nominated Hand to God; and a preview of Lover, Beloved: An Evening With Carson McCullers, performed by the Grammy-winning singer Suzanne Vega.
Alley Theatre, February 2–12, alleytheatre.org