The first thing I noticed as I pulled into this middle-of-nowhere retreat an hour south of Abilene was that I had no cell service (though Sprint customers should have better luck). The second thing I noticed was the achingly pastoral scene surrounding me: an organic garden verdant with heirloom tomatoes and black Spanish grapes, a peach orchard, and a petting zoo’s worth of critters, including a horse, two donkeys, a cluster of lambs, a brood of chickens, and the two black-mouth curs that bounded over to greet me. Their owner, Robert Williamson, wasn’t far behind, emerging from the restored 1878 farmhouse where he lives with his wife, Laurie, and their eleven-year-old daughter, Zadie. The former Dallasites, who own this three-hundred-acre spread, started welcoming strangers to their home in 2003, when they opened a 24-seat restaurant under their roof. Customers and friends took to hinting that they wished they could stay overnight, so in May the family debuted Rest, a flat-roofed, five-room structure made of corrugated tin and wood that’s as modern as their native-stone farmhouse is historic. The first four adjoining rooms have expansive sliding-glass doors, so you can look out onto a seemingly endless swath of prairie from your queen-size bed. The fifth room, at the far end of a long walkway, is a minimalist sanctuary with a king-size bed, a poured-concrete floor, a freestanding soaking tub, and white walls adorned with two of Robert’s meditative photographs of horses. The yuzu margarita and plate of spicy edamame that were awaiting me turned out to be harbingers of the thoughtful dishes that Laurie would prepare for dinner that night (which included a salad of prosciutto, burrata, and fresh-picked peaches and a tender cut of Akaushi steak). Laurie admits that “there’s not much to do out here”—though one can go antiquing in nearby towns—but I found that having no television and no radio was no problem. As for my cell phone, it made for a nice paperweight atop the stack of magazines I’d brought to read by the pool. 2969 CR 422, 325-636-4556, rancholoma.com 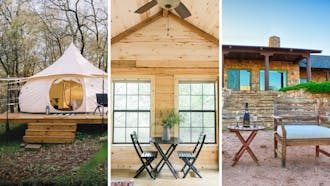 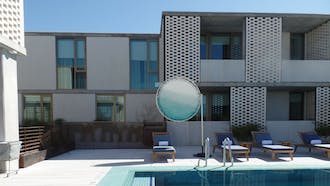 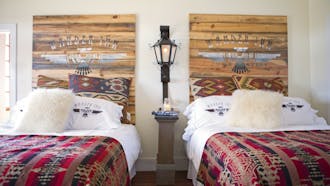 Where To Stay Next 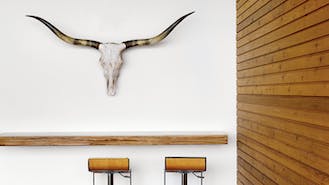