This story originally appeared in the December 2017 issue with the headline “Round Top’s Awakening.”

Each spring and fall, tiny Round Top transforms into the capital of antiquing, attracting more than 200,000 treasure hunters to its world-renowned fair. But the shopping doesn’t end when the last trailer pulls out of town; in fact, this historic hamlet of about one hundred residents is home to unique boutiques, restaurants, and hotels—many of them relatively new to the scene, like the Junk Gypsy sisters’ upcoming Wander Inn—that make Round Top a worthy destination any time of year.

Round Top’s new commercial energy emanates from Rummel Square and Henkel Square Market, whose historic buildings house some surprising contemporary businesses. Behind this evolution is visionary developer Mark Massey, who, after buying Henkel Square Market in 2010 with his brother and parents, developed the 57-acre Compound events venue just south of town. Two years ago, the Houston native purchased Rummel Square and began relocating local landmark structures to the site.

Recalls Massey, “When I first moved back to Houston after living in New York City and Los Angeles, I loved driving the back roads around Round Top, finding old buildings in pastures, moving them into town, and restoring them. I was fascinated with how they could pop again.”

Among the structures Massey relocated is Fayette County’s oldest building, Moore’s Fort, which dates back to 1828 and was used to shelter settlers during Comanche raids. Now in Rummel Square, the log cabin is home to one of Round Top’s newest shops. At 250 square feet, Bad Hombres resembles a fashion-forward man’s dream closet: hard-to-find Harley-Davidson belts in pristine condition line the walls, while assorted jackets—brown leather aviators, sleek black cafe racers, a studded punk-rock number—hang from the racks. Every piece has a story, stories that you can hear from proprietor Armando Palacios on most weekends, when the legendary Houston restaurateur can be found in the shop or in the half of the log cabin that serves as his design office. It’s in this space, a celebration in dichotomy, with modern Barcelona chairs and a Jeff Koons Balloon Dog set against the rustic architecture, that Palacios designs homes as well as his upcoming eatery, Mandito’s, set to open in the former Los Patrones restaurant in January. Palacios, who first bought property in the area in 1980, says, “Round Top is changing, and there is so much new, young energy in the air.”

Nearby in Rummel, in a twenties-era home built for a traveling judge, Townsend Provisions features clever home goods selected by husband-and-wife owners Nick Mosley and Ryann Ford-Mosley and a room filled floor to ceiling with vintage boots stocked by Mosley’s mom, Linda. With the store’s recent expansion to include the renovated second floor, Townsend brings an elevated country style to the square with retro holiday decor, antique farmhouse furniture, cute kids’ tees, and modern wares (like tea towels designed by Texas native Todd Oldham for Charley Harper Art Studio). “We all feel like we are on the verge of something incredible here,” says Mosley. 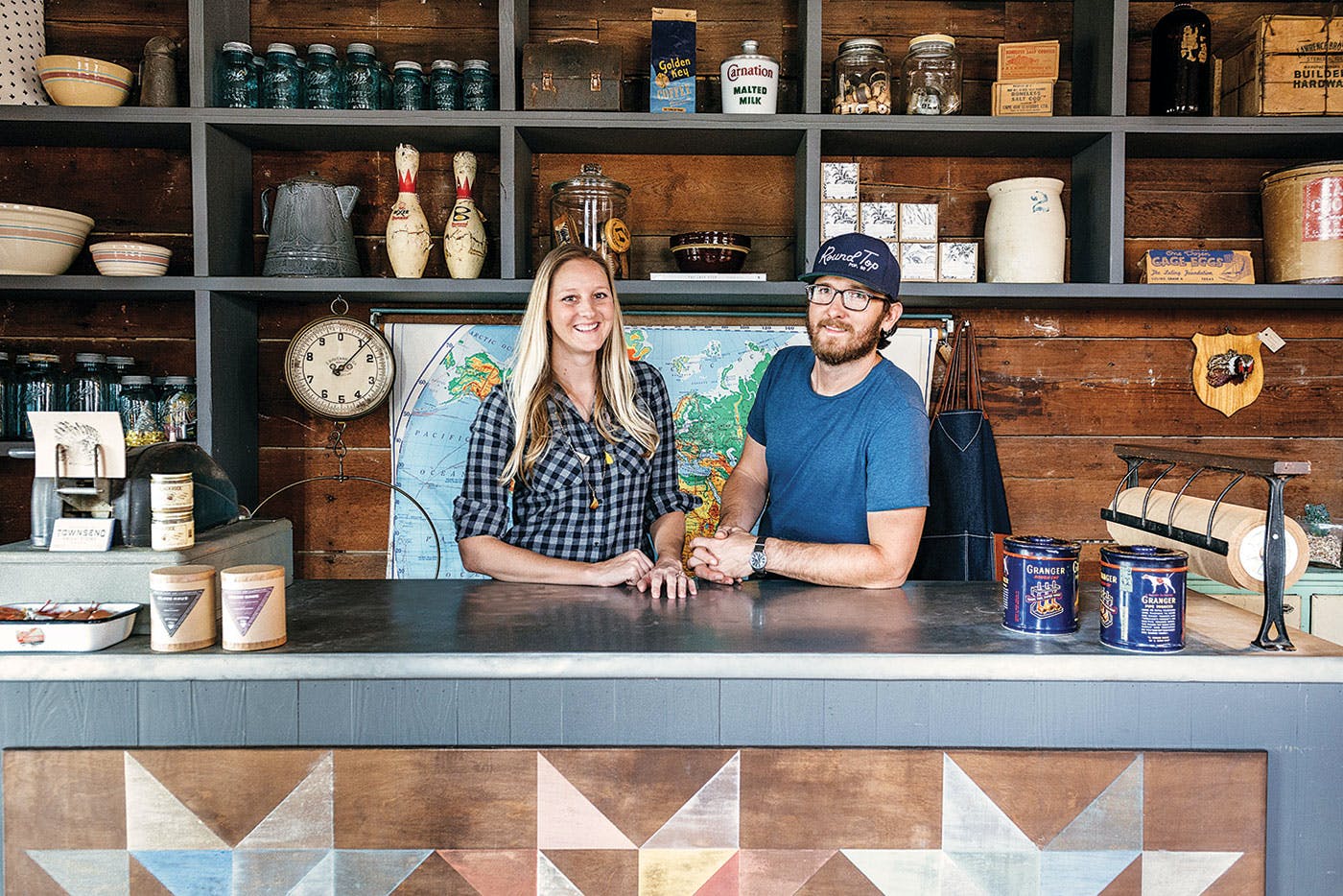 Developer Massey worked with Cheryl Schulke, best known for crafting beautiful leather goods under the moniker Stash Co. in Sealy, to help her bring Curate by Stash to Rummel Square. The 117-year-old house is filled with more than just leather. A block-printed Shibori flag by L.A.-based Graham Keegan hangs on the wall near an antique dining table topped with apothecary goods and smart gifts for all ages, like a basket of wooden slingshots in bright hues by San Francisco’s Hella Slingshots.

After John Lowery, a former illustrator for NASA turned advertising executive, bought land in nearby Burton with his wife, Laurie, an antiques dealer, he was inspired to start painting farm scenes. To showcase his work, he opened Humble Donkey Studio, which recently moved into a new location, a red barn in Henkel Square that also features Laurie’s finds. On weekends, the gregarious couple like to share beers and chitchat with customers.

Also in Henkel, Bastrop couple John and Eric Alexander opened a storefront for the Dapper Deer Co. earlier this year. A taxidermy deer shoulder mount bedecked in a shirt, tie, sweater, and smoking jacket (and with a pipe propped in his mouth) is a nod to the shop’s sense of whimsy. Finds from the antique dealers’ years of digging are everywhere, from the English hunting paintings on the wall to retro trophies perched atop antique china cabinets.

The Garden Co. Café, Feed & Firewater, in Rummel Square, is a beautiful space that serves lunch (salads and sandwiches) and dinner (pork chops and seared duck). The highlight of the restaurant, set in a 1914 home, is the back bar, wrapped in brass and accented with modern geometric tiles. The big porch out back provides an inviting spot to dine under a five-hundred-plus-year-old oak tree. This is the second location for landscape designers Jeff and Stevie Thompson, who own the Garden Co. Marketplace & Café in Schulenburg.

At Bistro Napoletana, where the wood-fired pizzas speak for themselves, the locals love to end the day with a glass of frozen sangria on the back deck facing quaint Bybee Square. Mother-son chef duo Mary Helen Latimer and Nate Beck run the kitchen, while Mary Helen’s husband, Charlie, handles front of house, making the rounds to every table. 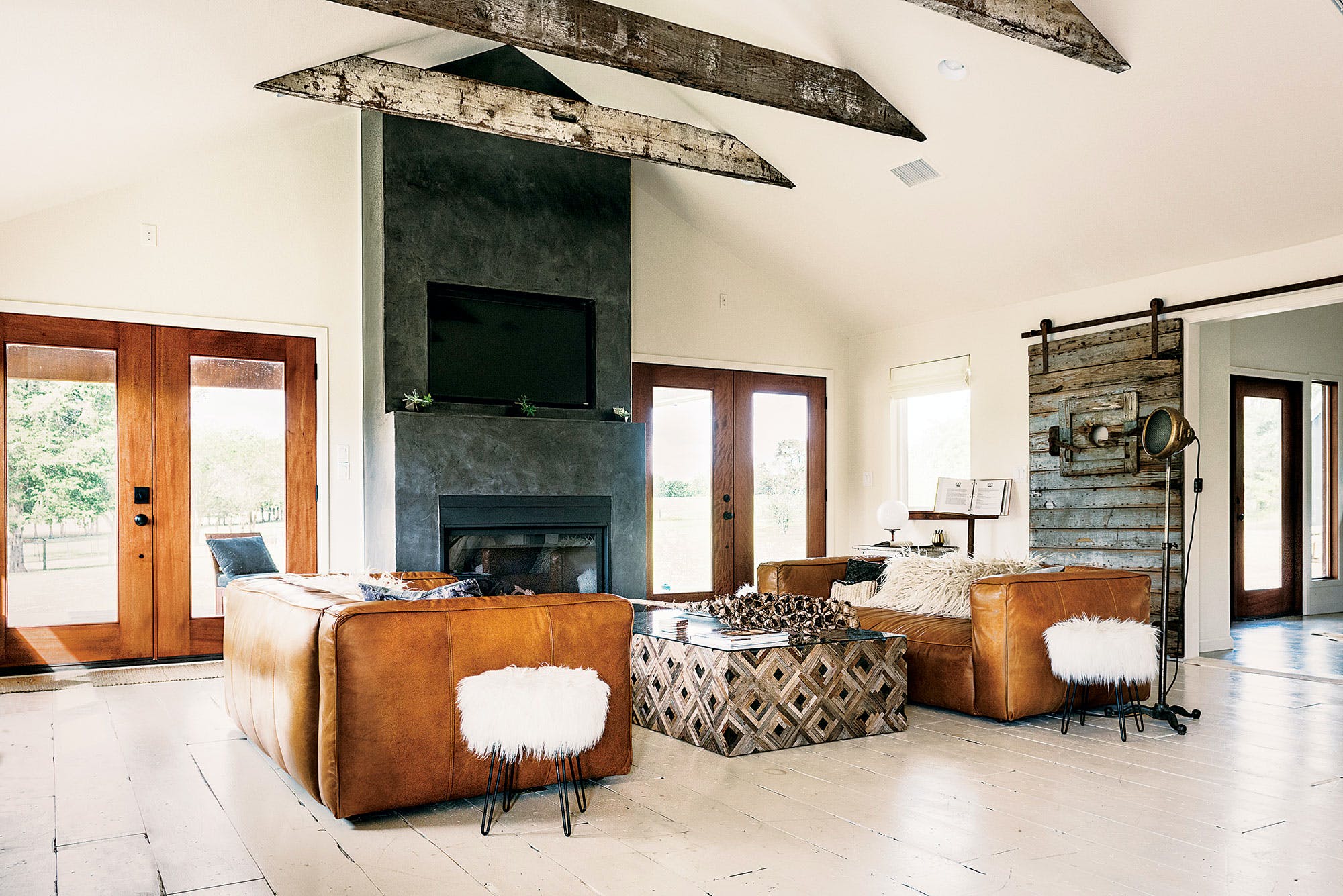 Paige and Smoot Hull have helped introduce Round Top to a younger generation by hosting bloggers and influencers from around the country who post selfies from the Hulls’ stunning vacation rental, the Vintage Round Top. Paige, a former VP of the modeling agency Page Parkes, and Smoot, an accomplished veteran of the nightclub and restaurant industry, decided to buy a farmhouse in Round Top for their family of five. They completely transformed the drab building, located a mile from the shopping district, into a lodging option filled with French antiques and modern and reclaimed accents for an overall bohemian feel. They opened their first cottage, No. 1450, to visitors in 2012, and unveiled the more glamorous Boho Cottage in 2016. The two rentals make up the 4,400-square-foot home, which can be rented in its entirety for large groups up to 15. Weekend stays fill up fast; rates start at $325 per night at Boho and $250 at No. 1450. 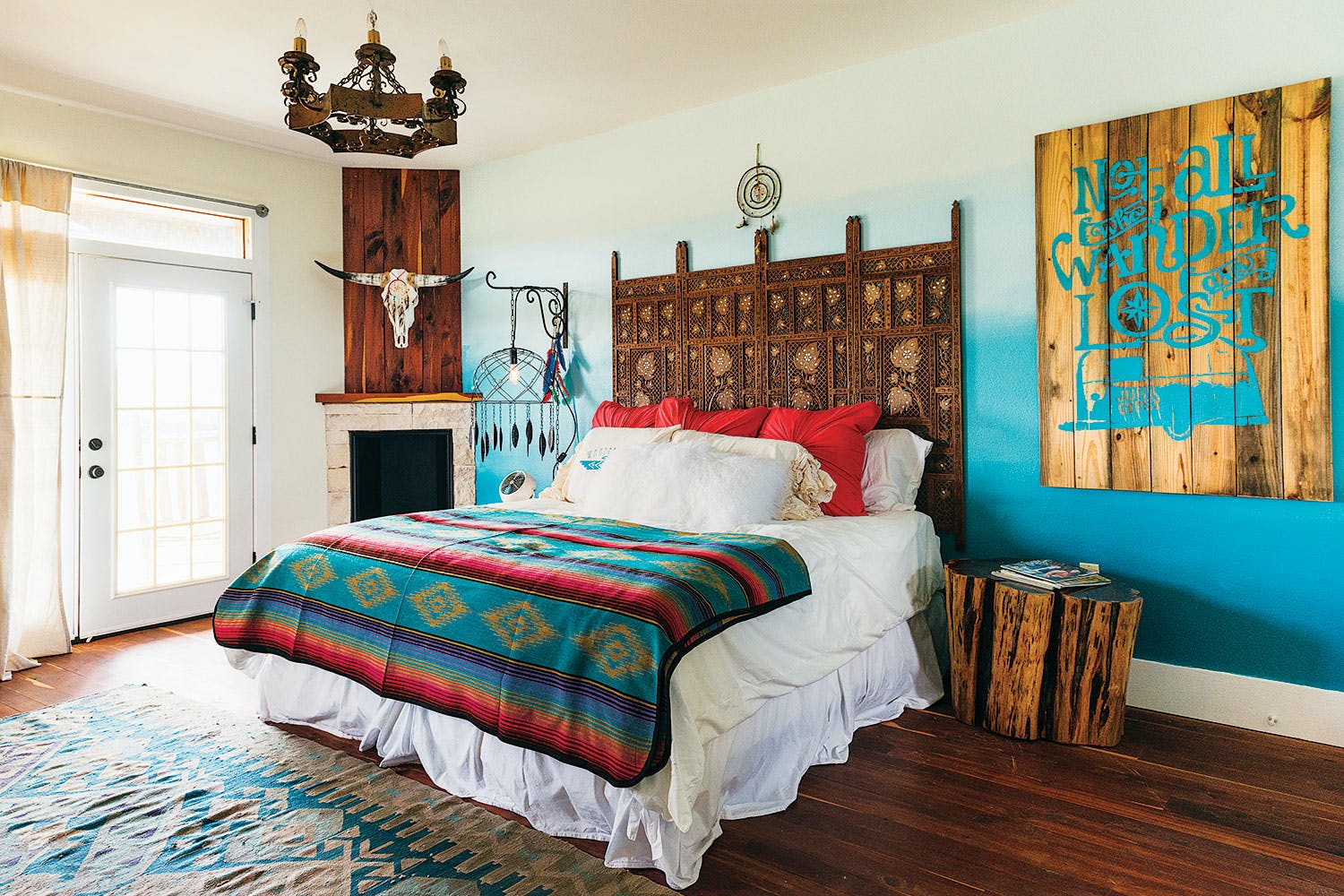 Two of Round Top’s most well-known residents are the sisters behind television’s The Junk Gypsies, Amie Sikes and Jolie Sikes-Smith. This winter they’re opening their first hotel, the Wander Inn, which until now was primarily a guesthouse available only to friends like singer Miranda Lambert, whose recent album cover was photographed on the property. As a departure from their typical “more is more” design philosophy, the sisters’ approach to the inn is restrained, yet the Americana-meets-rock-and-roll look still feels like them. Rooms in the eight-suite hotel (the sisters have plans to redo more historic farmhouses in 2018) rent for between $250 and $350 a night. “With the common areas,” Amie says, “we hope that people will arrive as strangers and leave as friends, [having] bonded over the free spirit of Round Top.”