COLLEGE STATION
This Land is Your Land
In the exhibition “You Are Here: Texas Photographers Respond to the Texas Landscape,” the Lone Star State’s terrain is the vehicle through which more than twenty artists explore our collective socio-political, environmental, and cultural identity. Not only does the show offer many different takes on the place we all call home, but there are several different processes employed to create the photographs.

Much-discussed topical narratives are portrayed—issues concerning the Texas-Mexico border, as well as our vanishing small towns in the face of urban sprawl. There are also some curious studies of the state’s myths, including one picture depicting the location of a Bigfoot sighting.

In anticipation of the opening this weekend, we spoke to three participating artists about their pieces: 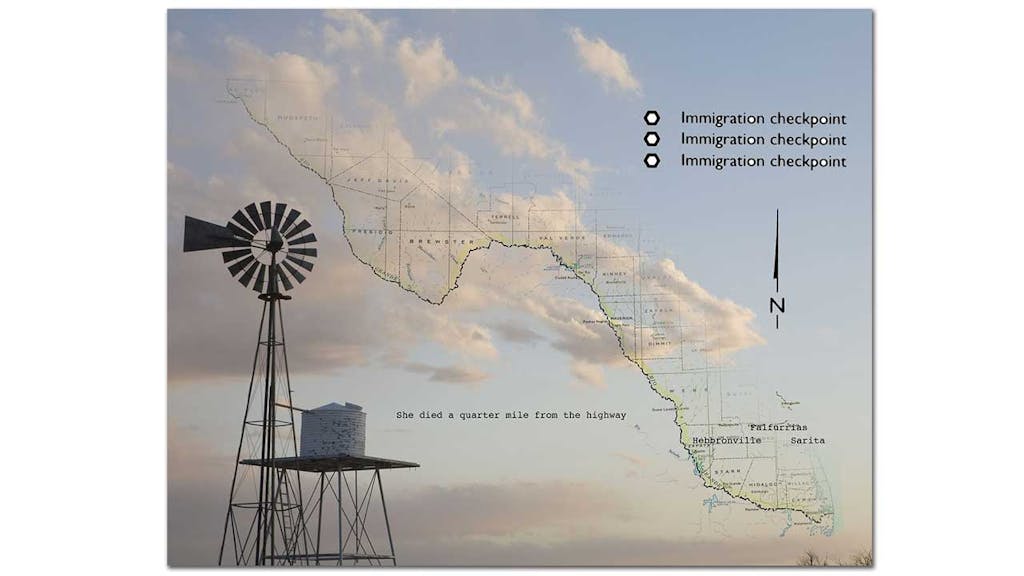 Lupita Murillo Tinnen, a professor at Collin College, on her photograph Windmill: “Several of my images are about all the undocumented Latin American immigrants who have perished while traversing the Texas landscape as they make their way clandestinely into the United States, and the men, women, and children whose bodies remain unclaimed in unmarked graves. This particular image is about a woman who died a quarter of a mile from the highway. The subject matter is important to me because my parents are Mexican immigrants. I enjoy mixing text with images as an aesthetic choice but also because the text helps the viewer to ask more questions.” 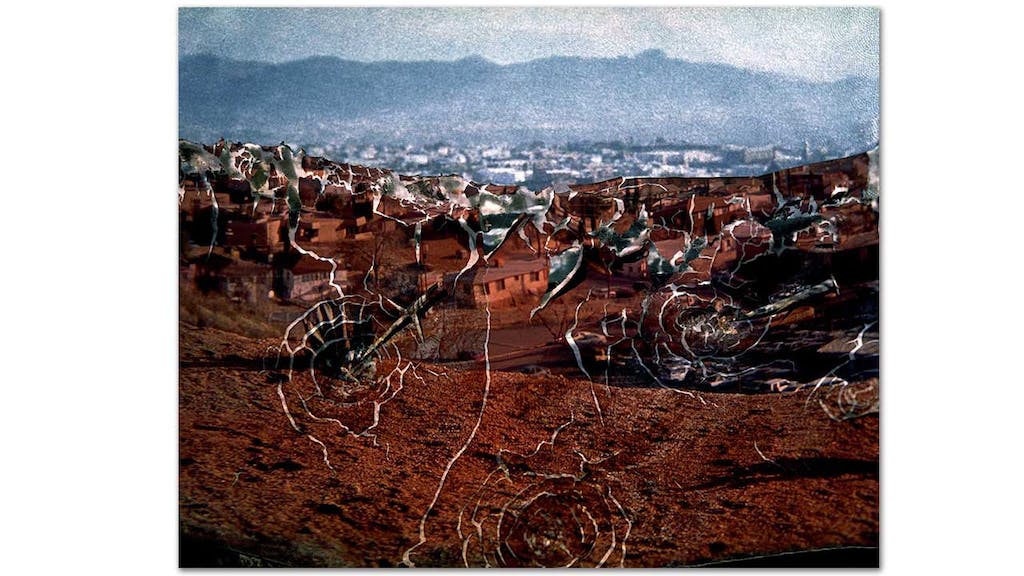 Dornith Doherty, a professor at the University of North Texas, on her photograph Vinyl Vista: “The image is kind of complicated: it is a still life of a vinyl car seat, desert thorns, and a few other objects I collected along the Rio Grande River as it runs to the Gulf of Mexico, illuminated by a transparency I took using slide film of the landscape in El Paso. The whole assemblage was then photographed to create a landscape photograph that refers to an environment being transformed by a host of critical issues. For example, in the years I was photographing there, there were over 200 murdered or disappeared women (feminicidios) who lived in El Paso and Ciudad Juárez.”

Karen Hillier, a professor at Texas A&M University, on her photograph Trees (featured above): “Personal truth places my birth in an open field under the vastness of Texas sky in the Brazos River bottom. Cotton is extremely important to the farmers in the Valley. And I do have a sweet spot for the farmers, admiring their dedication and hard work and beautiful long-staple cotton. Shot in Law, on black-and-white film with a stereo pinhole camera, the two small photos are not the same, but slightly different. There is a left-eye photo and a right-eye photo, just like we see. The photo is viewed using a stereo viewer. Or, for people who can manage it, stare at the center black line, “relax” the eyes, and look through the photo to an imagined horizon.”
Wright Gallery, April 22 to June 2, one.arch.tamu.edu

DALLAS
Claim to Fame
“Denton-rooted band Parquet Courts gets unwelcome fame” read the headline of a 2015 Dallas Morning News article. Unwelcome fame? The writer went on to say that Andrew Savage, the lead singer and guitarist, called fame “completely bogus.” What the … ? But Parquet Courts, an indie rock group now in Brooklyn, come out of the punk ethos so it wasn’t a surprise Savage refused to get caught up in the adulation of the press and fans who have mounted since their breakout 2012 album Light Up Gold, a 33-minute burst of songs about entitlement, war, and getting the munchies while stoned. But the truth of the matter is that Savage, who started the band at the University of North Texas with guitarist Austin Brown, cares more than it may appear. He studied painting in college, after all; he’s a sensitive, thoughtful guy under that steely stare. The proof is on the new album, Human Performance, which occasionally shows a softer side of Savage, with actual slow songs and songs that expand the punk paradigm. Parquet Courts will return to its home base next Thursday for a show in Dallas, followed on Saturday with a performance at the Levitation music festival in Austin, and then on Monday in Houston.
Granada Theater, April 28, 7 p.m., parquetcourts.wordpress.com

GEORGETOWN
Big Red
Certain parts of Texas are fertile ground for poppies this time of year. Earlier this month in El Paso, the Poppies Fest was held to signal the arrival of the Mexican gold poppies lining the Franklin Mountains, and this weekend, Georgetown will host the 17th annual Red Poppy Festival.

The story of how the red poppies came to this part of the world is pretty remarkable. An American stationed in Europe sent poppy seeds back home to his mom, in Georgetown. She planted them around her home, which is now 507 East 7th Street, and from there, the birds and the bees carried them elsewhere around town. Then in the eighties, the Red Poppy Garden Club, City of Georgetown, and Williamson County Sun joined the effort by starting to distribute poppy seeds. This led in 1990 to the Legislature declaring Georgetown the Red Poppy Capital of Texas.

Of course, flowers alone hardly make a festival that occurs over three days, which is why there is also live music, a classic car show, and BMX bikers performing fancy tricks.
Old Town, April 22-24, poppy.georgetown.org

HOUSTON
Waterfall
A leaky faucet has the potential to create one of the all-time most annoying sounds: drip … drip … drip. The artists Jeff Shore, from Houston, and Jon Fisher, from Dripping Springs, have turned that painful aural experience into sweet music with Drip Machine, an automated electro-hydraulic system that pipes out curious tunes.

As each drip of water in four repurposed aquariums hits a corresponding sensor, pumps and valves help churn out sounds through twenty speakers. According to the artists’ statement, Drip Machine embraces “the conflation of DIY aesthetics and visual technologies, the exploration of the relationship between automated and chaotic movement, and the spectator expectations about the cause-effect relation between image and sound.”

The ominous-looking industrial contraption, displayed in dark environs as if a set piece for the sci-fi movie Dune, is on view at the Blaffer Art Museum’s satellite site on Milam Street through Wednesday only, as part of the Windows into Houston series of street-level, site-specific contemporary art exhibits.
110 Milam Street, April 22-27, blafferartmuseum.org

DALLAS
Earth Bound
Earth Day should be celebrated every day, but if you need incentive to participate in Earth Day Texas, the state’s biggest event of its kind, consider that this year is particularly momentous because the Paris Agreement is to be signed by more than 100 countries in recognition of climate protection. That, plus the live music (featuring Kinky Friedman and Michael Martin Murphey), speeches (by political scions Karenna Gore, Robert F. Kennedy Jr., and Ted Roosevelt IV, among others), and other offerings (a sustainable-beer garden) are spread out over a full weekend, giving you three days to specifically celebrate our blue planet.
Fair Park, April 22-24, earthdaytx.org

AUSTIN
Tolkien of Appreciation
Even the most rabid fans of The Lord of the Rings probably haven’t seen one of the movies at a drive-in, much less all three, but the Blue Starlite Drive-in is making that opportunity possible with the Trilogy Marathon. To prevent a sore back and bum (it is a nine-hour-long marathon if you run all three films together), they’re spreading the screenings out over two weeks’ time.
Austin Film Society, April 22 to May 6, bluestarlitedrivein.com