Over the years, Texas Monthly writers have driven just about every highway, byway, interstate, country road, back road, loop, spur, farm-to-market road, ranch-to-market road, park road, and toll road (but only when otherwise unavoidable) across the state. And we’ve found that you need little more than a copy of  The Roads of Texas atlas, a full tank of gas, an unhurried day or (ideally) long weekend, and a cooler filled with the Texanist’s favorite road food to embark on your own reportorial excursion.

Here, a half dozen routes across Texas’s most scenic stretches that solidify that old adage: when it comes to life and road trips, it’s all about the journey, not the destination. 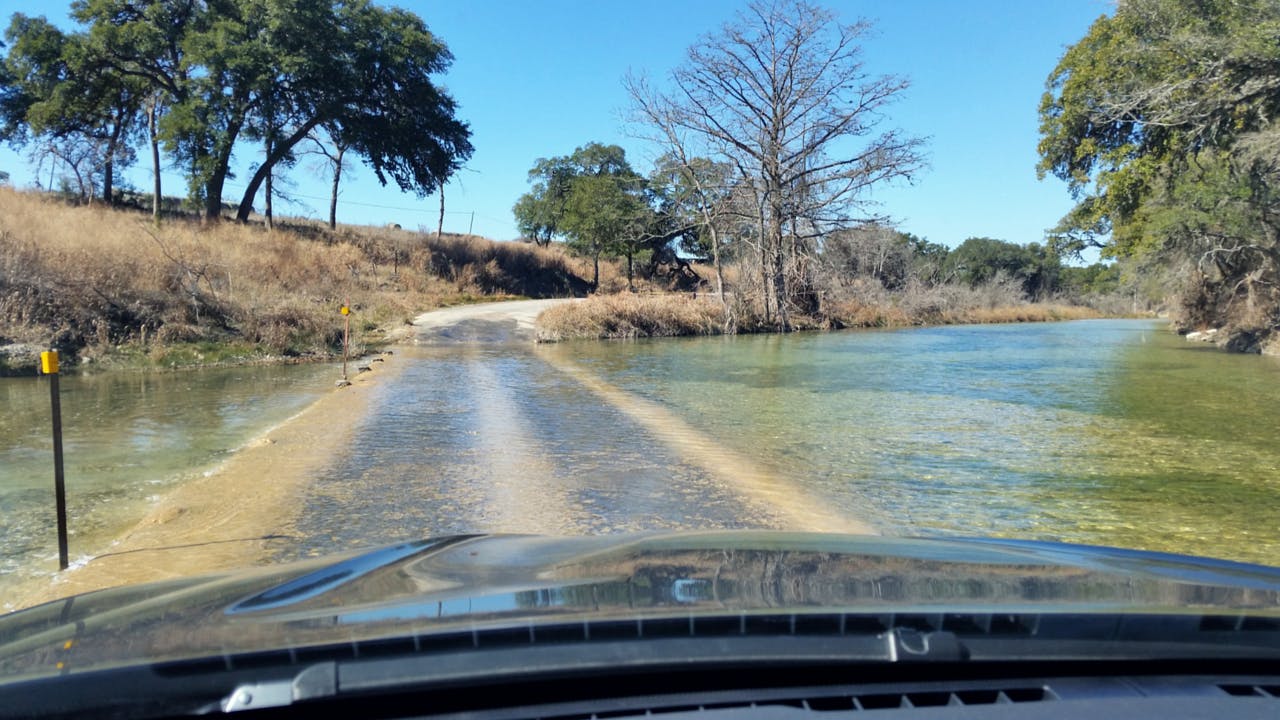 THE HILL COUNTRY: Dripping Springs to Johnson City to Blanco to Fischer to Wimberley to Driftwood

Inspired by: “On the Road Again: Hill Country” by Suzy Banks

Near the end of the road, a dip, a curve, a creek crossing, a dense thicket, and a dilapidated farmhouse create a spookily beautiful spot. I’m spinning its fictional history—a gorgeous widow, false accusations of witchcraft, that sort of thing—when I reach Ranch-to-Market Road 165 and an entirely different mind-set. In this open landscape, which somehow seems sunny even on this foggy winter day, dark imaginings are impossible. Heading left through grasslands and alongside sheer cliffs, I top a hill, and suddenly the Blanco River valley spreads out before me. If I floor it, I feel certain my boxy Subaru will soar into the gray-white sky and land safely several miles away.

Pro tip: Don’t bypass the chance to drive down CR 101, aka Little Blanco Road (pictured above). Though it only runs five miles between U.S. 281 and Blanco Kendelia Road, it’s long on charm with picturesque ranches, majestic oaks, and several watery crossings of the Little Blanco River. The two-lane stretch is so secluded it’ll feel like you’re intruding on a private driveway, but it is a public thoroughfare (just resist the urge to get out and do any traipsing—i.e., trespassing—onto actual private property). 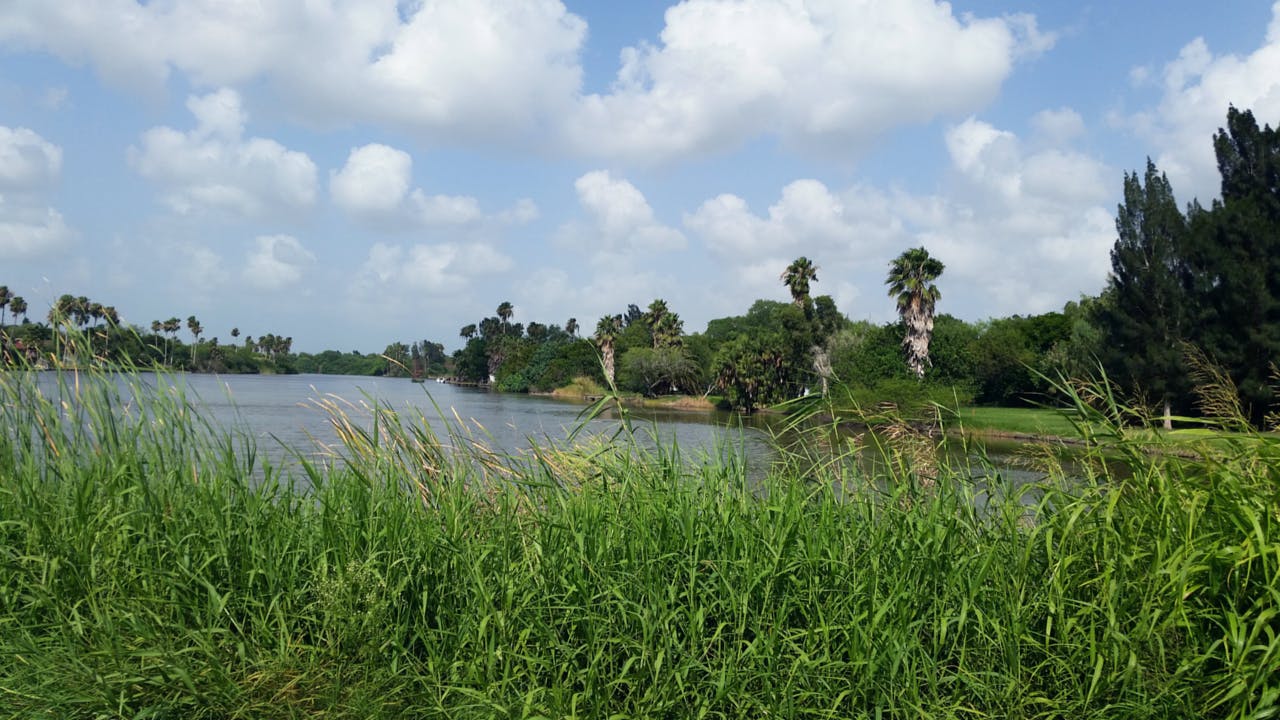 Inspired by: “The Birding Drive” by Patricia Sharpe

Hugging the U.S.-Mexico border in far South Texas, the sultry stretch of land known as the Lower Rio Grande Valley is the Casablanca of the bird world. Sooner or later all of the usual—and some very unusual—suspects end up here. Want to see a green jay, which looks as though it has been dunked in a bucket of chartreuse paint? No problem. What about a black-and-orange Altamira oriole, which wears a Halloween costume year-round? Easy. Species from Mexico and Central America find the Valley’s subtropical climate very much to their liking, and U.S. and Canadian birds take time out here for R&R during their marathon migrations.

Pro tip: Stretch out this 89-mile drive over the span of a long weekend so you can spend a day spotting green jays and gators (and maybe even an elusive ocelot) at Laguna Atascosa National Wildlife Refuge and then spend a night or two at the birder-friendly Inn at Chachalaca Bend, a secluded getaway in nearby Los Fresnos. 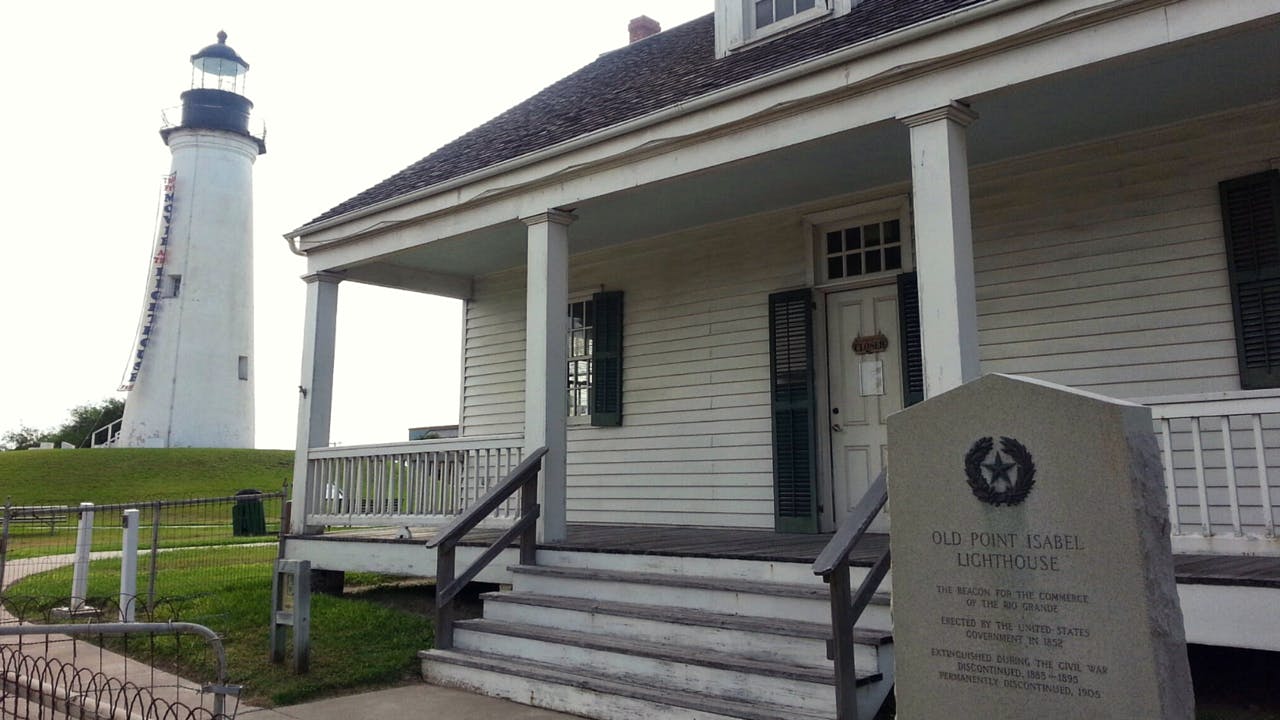 Inspired by: “The Lighthouse Drive” by Katy Vine

I started as far east as you can go on the Gulf Coast and still be in Texas. And since the Sabine Pass Lighthouse, which is technically across the state line in Louisiana, is on a private road, I decided to drive along the border just south of the Sabine Pass Battleground State Historic Site, on First Avenue, until the structure came into view. Even from a distance, it was impressive. While only about as big as my thumb when my arm was outstretched, I could clearly make out the octagonal lighthouse, built in 1857. It was a whopper—80 feet of brick going straight into the air as if ready to lift off from its eight giant buttresses.

Pro tip: After climbing the 75 steps at the Port Isabel Lighthouse (it’s the only one on the Texas coast that’s open to the public), head next door to the South Padre Island Dolphin Research and Sealife Nature Center to buy tickets for Scarlet Colley’s dolphin tour, an hour-and-a-half-long cruise through the Laguna Madre that will get you up close and personal with the playful creatures. 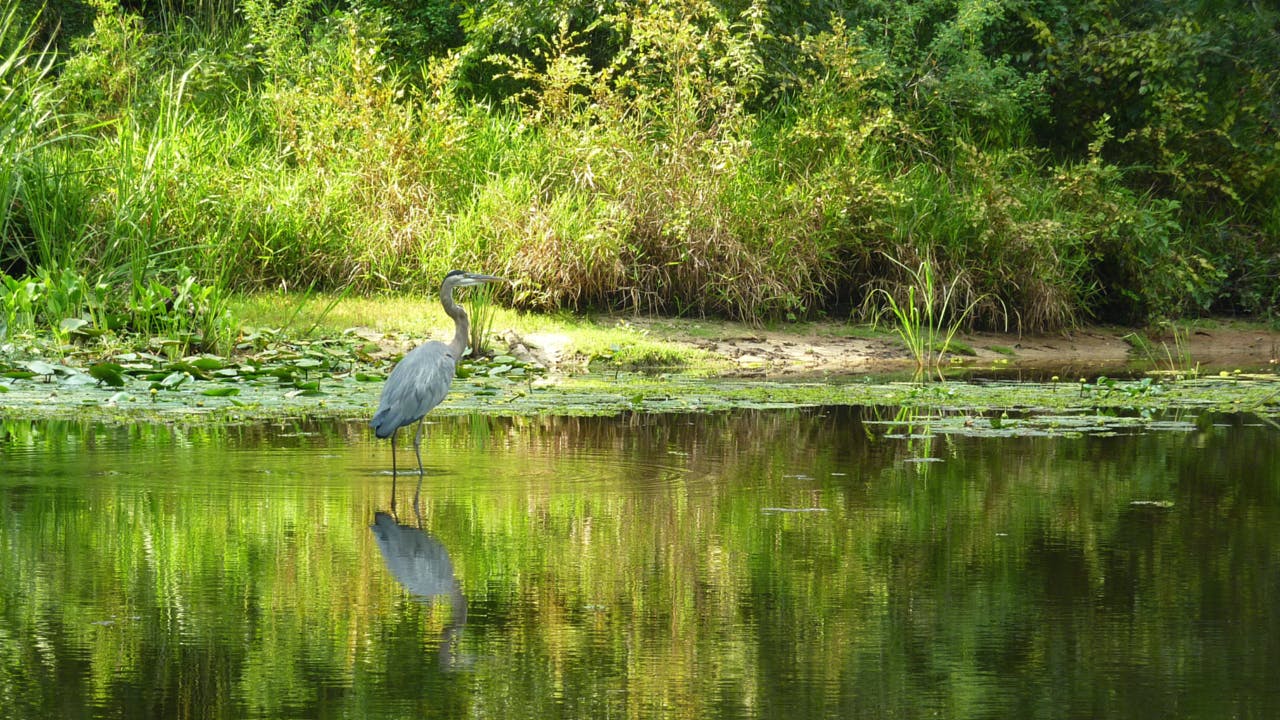 Inspired by: “The Backwoods Drive” by Michael Hall

Cross Interstate 20 and head south on Texas Highway 9, then make a right onto U.S. 79 and go over the wide Sabine River. Just north of Carthage, stop at the memorial to Jim Reeves, the country star who was born in nearby Galloway and died in a plane crash in 1964. The monument feels like something you’d see in Hollywood, with perfectly sculpted hedges, a giant guitar engraved in the sidewalk, and a statue of Gentleman Jim on a six-foot pedestal. Soon you will be deep in the Pine Curtain, with a thick canopy of trees and miles of lush forests bracketing the road. Turn south on U.S. 59, which merges with U.S. 96, and after half an hour, you’ll arrive in San Augustine, a settlement that has been around longer than Texas itself.

Pro tip: Take a detour over to the Sabine National Forest and lace up your hiking boots to hit the 28-mile Trail Between the Lakes, which runs from the Lakeview Recreation Area on Toledo Bend Reservoir to Highway 96 near Sam Rayburn Reservoir. Keep your eyes peeled for songbirds, hawks, and shorebirds, in general, and the endangered red-cockaded woodpecker, specifically, that zip through East Texas’s central flyway here. 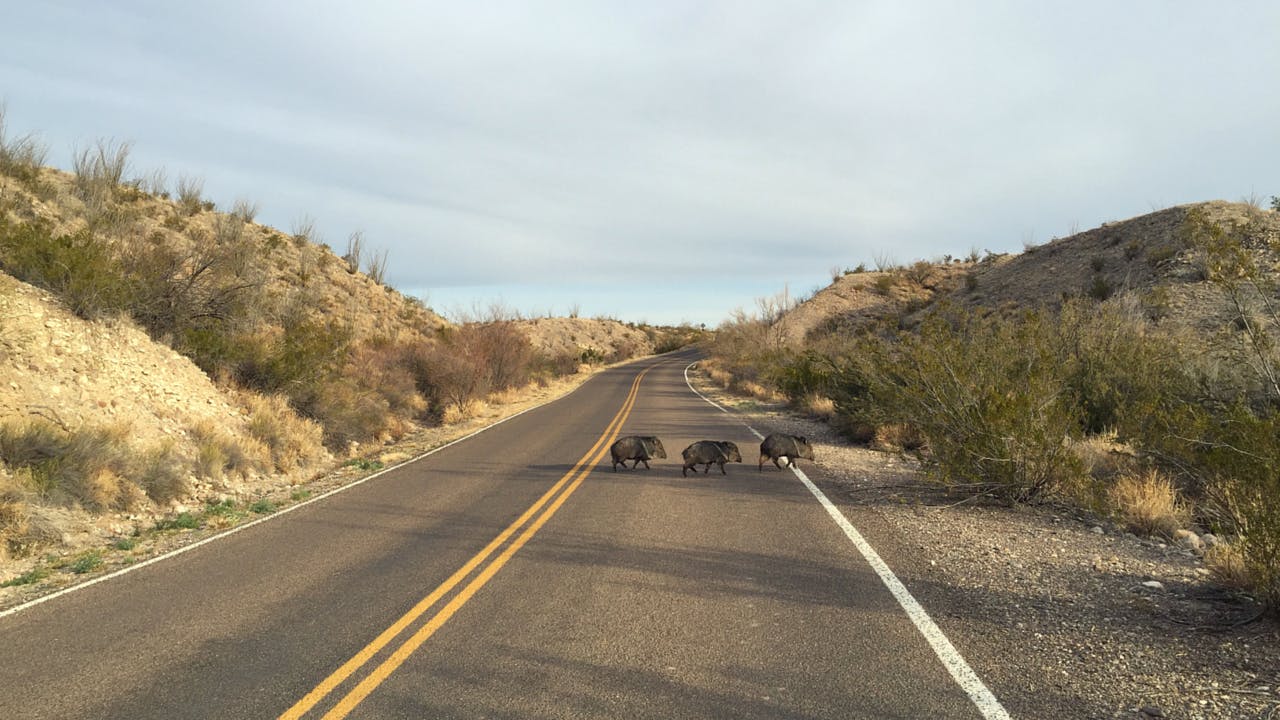 The sinuous road took me over hogbacks and around hoodoos, the shifting shadows and post-rain blooms adding surreal splashes of color. Big Bend bluebonnets nodded in the breeze. Coyotes ventured out, in search of that evening’s meal. Dusk and dawn are the best times to spot native denizens, and as daylight faded, I was treated to a safari of golden eagles, scaled quail, jackrabbits, roadrunners, javelinas, and even a fat black bullsnake on the sun-warmed blacktop.

Pro tip: Make a beeline for the Castolon Historic District, once a cavalry outpost, to poke around the old adobe buildings and to refuel with cold drinks and snacks procured from the La Harmonia Company Store before getting on your way again. 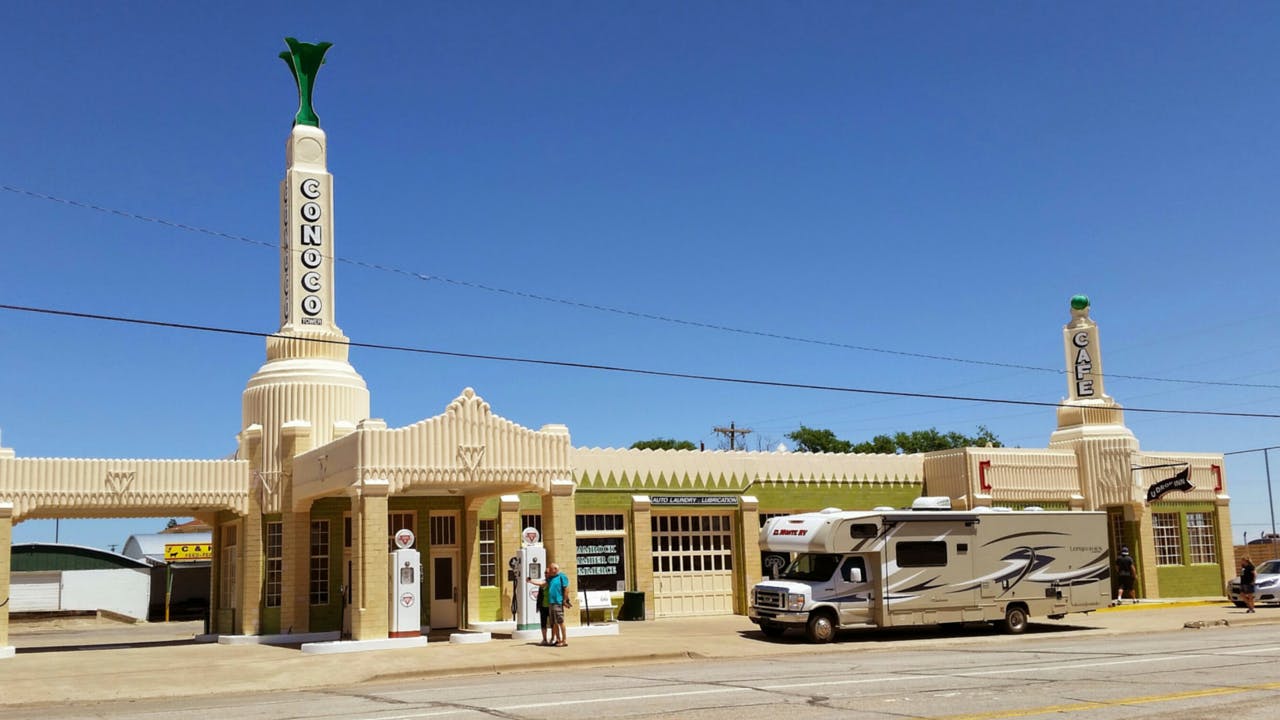 Imagine a land of wide-open spaces and breathtaking vistas, a place that’s so rarely visited by tourists the locals haven’t turned cynical, yet is tailor-made for that great American pastime: the road trip. Such a place really does exist—we call it the High Plains of Texas. Long empty miles of uncrowded highways crisscross rolling hills and rugged canyons, offering endless horizons and spectacular panoramas under skies of a majestic vastness. And there’s hardly a billboard in sight.

Pro tip: Start your journey down Texas’s portion of America’s “Mother Road,” in Shamrock, where you’ll find snacks, souvenirs, foreign tourists, and even six Tesla charging stations at the U-Drop Inn. When you get closer to Amarillo, ditch I-40 and follow the brown Historic Route 66 signs just off of the interstate for a more-scenic jaunt. Be sure to stop by the Nat, an enormous and exquisitely curated antique mall in the city’s Sixth Street Historic District.

How to Drive 85 Miles per Hour

By Texas Monthly and Michael Hall