Dappled sunlight beams through the bald cypress along the waterways of the Big Thicket National Preserve, in Southeast Texas, where the trailhead parking lot is filling up with cars despite the fact that the nearby visitor center has been buttoned up tight for nearly three weeks. It’s a beautiful day for a hike, and not just for Texans: a passenger van with a Mississippi license plate idles as a school group wrapping up vacation piles in. A visitor from Beaumont heads up the trail into the woods, while local John Viverette, who lives in nearby Kountze, keeps an eye out for litterbugs.

“I come here all the time,” Viverette says, as his hound, Norma Jean, paces in the cab of his pickup truck. “Since the government shutdown, I haven’t seen anybody here to do maintenance, so I’ve been picking up trash and cigarette butts.”

As the federal shutdown—which entered Day 20 on Thursday—continues, self-appointed cleanup crews have been organized across the state as well as the nation to help care for parks that have remained open, albeit with little in the way of services. Some, like Viverette and the collection of Terlingua residents and businesses on the edge of Big Bend National Park, are volunteers, while in San Antonio, employees with the Bexar County Heritage & Parks Department are working to help maintain bathrooms and collect trash on the properties that make up the San Antonio Missions National Historic Park. “We went ahead and offered because we understand how important these places are to people,” says Bexar County public information specialist Monica Ramos. “If this lasts a year, we will keep doing this so everyone will be able to visit.” Other historic sites under the auspices of the National Park Service aren’t so fortunate: the Palo Alto Battlefield, in the Lower Rio Grande Valley, and the Fort Davis National Historic Site are closed to the public during the shutdown.

Retired ranger Dan Sholly, who lives in Terlingua, worked for the National Park Service from 1967 to 2004, and then spent a decade with Texas Parks and Wildlife as the deputy director of state parks. He remembers the longest federal government shutdown—the 21-day impasse at the tail end of 1995 when President Clinton and House Speaker Newt Gingrich sparred over spending cuts. But that was different because the national parks were all closed to visitors, as they typically are during government shutdowns. The Trump administration’s orders to keep national parks open to visitors where possible have created huge challenges and raised concerns about the impact on the environment.

“My experience tells me that people will end up ransacking areas of the park if they think nobody is watching,” says Sholly, who has visited nearby Big Bend National Park about five times since services were suspended. “We’re seeing toilet paper along the road because the bathrooms are locked, and on some trails,” says Sholly. “But the longer this goes on, the deeper these impacts are going to be.” On Christmas Eve, a hiker in Santa Elena Canyon in the southwest corner of the park broke his leg and needed to be rescued with the help of a furloughed ranger, but with more than 1,200 square miles of rugged desert parkland to patrol, the few law-enforcement officials deemed essential staff can do little more than issue tickets for speeding.

Reports of damage at national parks like Joshua Tree National Park in California have raised huge concerns and led to calls for more action. The national Trust for Public Land has asked the White House to consider closing the rest of the national parks until the budget impasse is resolved. For now, however, those who want to experience Big Bend can still do so, although lodging options are limited. The Chisos Basin Lodge (which a spokesman says has maintained a steady occupancy despite the shutdown) and the RV park at Rio Grande Village remain open because they’re owned by a private concessionaire, Forever Resorts, but there are no open campgrounds and no way for visitors to obtain backcountry permits for overnight camping. The road to the popular Santa Elena Canyon is barricaded.

That has led to a mini-boom in overnight visits to nearby Big Bend Ranch State Park, which saw increased camping traffic over the holiday break, according to TPWD, as well as at private campgrounds in Terlingua. At Basecamp Terlingua, a newish resort that has an assortment of cabins, teepees, and a newfangled, European-designed inflatable bubble, hospitality coordinator Tony Drewry says that there have been a few spring cancellations because of uncertainty about park accessibility. Basecamp is offering free tent camping and discounts to furloughed federal workers. “These people are all part of our community,” says Drewry. “Some are patrolling on their own time. We all love Big Bend and don’t want to see it trashed.”

Still, in the absence of a coherent national parks policy—President Trump’s embattled Secretary of the Interior, Ryan Zinke, stepped down just before the end of last year—many advocates raise concerns that citizen brigades will not be enough to protect cultural and natural resources across America’s national parks. Adding insult to injury, says Cary Dupuy, the Texas director for the National Parks Conservation Association, visitors deprived of the cultural programming ordinarily provided by park staff are missing out on basic advice about where to go and what to see. “There seemed to be a conscious effort to keep the parks open, but people who are planning on visiting them won’t have the full experience,” Dupuy says.

Just look at the state’s other large national park, Guadalupe Mountains National Park, where infrastructure is already minimal. The main campground at Pine Canyon has been closed for the time being, as are the popular McKittrick Canyon hiking trails, while historic Frijole Ranch is also off-limits because of damaged tree limbs in the area. As with all the national parks during the shutdown, no spokesperson was available to discuss trail conditions or future plans, nor are there online updates.

According to the NPCA, local spending from park visitors across Texas in January averages upward of $500,000 daily, another reason Dupuy argues for a swift resolution to the shutdown. New numbers from the Senate Committee on Appropriations also show a loss of revenues for park-affiliated “friendship” groups, such as the Big Bend Natural History Association, which runs the visitor center bookshop at Panther Junction; they stand to lose $35,000 in weekly revenues. Likewise, projects such as the annual Martin Luther King Jr. Day tree-planting program in the Big Thicket hosted by NPCA, along with the Big Thicket Natural Heritage Trust and the Big Thicket Association, may have to be rescheduled. The same goes for beach cleanups on Padre Island National Seashore.

Returning from a trip to PINS, fishing guide and Friends of Padre Island board member Jeff Wolda reports that his business has remained unaffected so far, largely because the protected barrier island beaches remain open, albeit without services. “In the past, they just threw up barricades, which pretty much shut everything down, but this weekend I saw tons of people on the seashore, because the weather was great,” says Wolda. “But we have concerns. Everybody has free rein, and some people are driving eighty miles per hour in the sand because they don’t think there are any rangers on duty—and then they’re pissed when they get a ticket.”

Wolda’s biggest fear? “It’s going to reach a tipping point, where the parks are going to get ruined.” 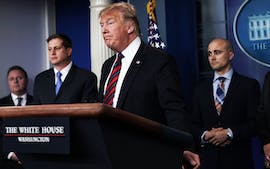 From Affordable Housing to Border Patrol, Here’s How the Government Shutdown is Affecting Texans