This is the last suspension bridge in the state that is still open to traffic. Built in 1939, it crosses the Colorado River and connects county roads 137 and 433. I first stumbled across the bridge while lost on a back road in 1988 and started including it in the opening footage of Texas Country Reporter. Over the years, the bridge had fallen into disrepair. Though there had been some talk about closing it, the Legislature passed a resolution in 1995 to fix it, and the federal government kicked in some funds to help out. TxDOT headed up the restoration, and in the spring of 1999 Governor George W. Bush and I were the first to cross the newly renovated bridge when we drove over it in the official TCR vehicle. The dedication ceremony attracted more than two thousand people to this remote spot, including reporters from CNN, CBS, ABC, NBC, and a host of state and local media (most of whom were following Bush everywhere in those days in anticipation of his run for the presidency). Today the Regency Bridge is the number one tourist attraction in San Saba and Mills counties and remains one of my favorite places in Texas. 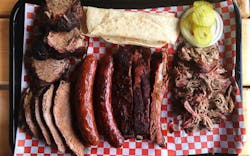 The Sisters of Prayer Town