This week had it all—highs and lows. I spent most of the week traveling through the Panhandle, a region of Texas I had never visited before. It challenged me with a few long rides and rolling hills, but mostly wind. The winds in the Panhandle are surely a mighty foe, but they can also become a loving friend when least expected. In Dalhart, as I was bringing my bike into my hotel room, my neighbor asked where I was headed. When I told him about the ride, he said, “You’re a machine.” Just like all machines, we all break down from time to time—and it helps to know a good mechanic. 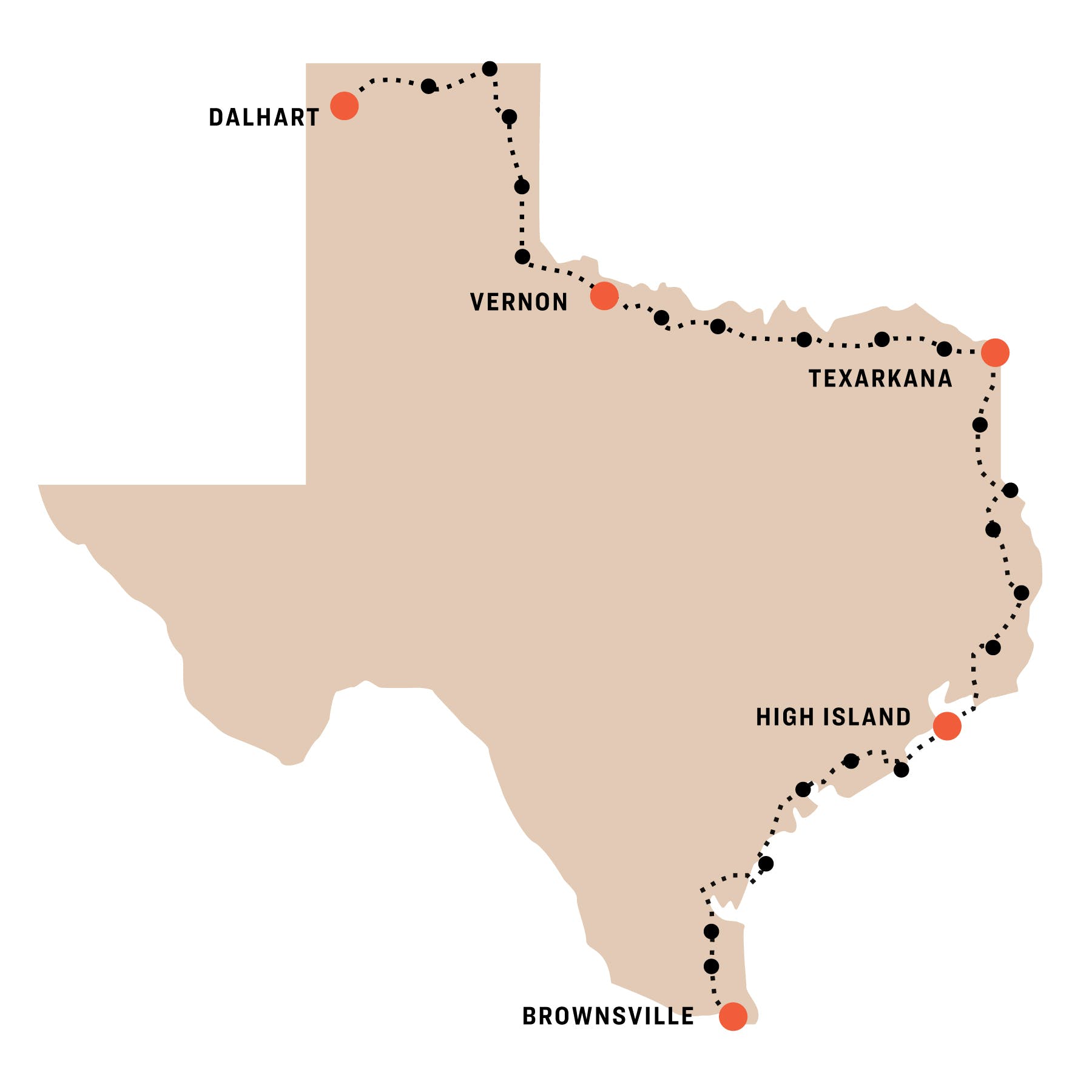 I woke up dreading this day. By this point I was really sick of riding on U.S. 287, with its never-ending parade of eighteen-wheelers and RVs. The shoulder is large, but the traffic is relentless. Heading out I was happy, though, that this would be the last day of 287. After today I’d be turning north into the Panhandle. A quick seventeen miles into the day, I hit Chillicothe, the town with the coolest name I had come across so far. I stopped at a large gas station to fill up my water bottles and grab some snacks for the road.

Loaded up for the day, I was back on the bike when I saw a sign for a coffee shop, touting its espresso and breakfast a half a mile up the road. This was too tempting to pass up, even if I was set for the rest of the ride. I donned my mask and walked into Turquoise Coffee Stop to order an americano. As I was leaving to sip the coffee on the patio, I noticed the “mask-free zone” sign posted on a table. I was glad they let me wear my mask so that I didn’t have to shoot a viral video of me arguing with the owner about my freedom to wear one, a sort of reverse version of what I’d seen on Facebook this summer. I pulled into Childress and made my way to Fair Park. There the city has five RV camping spots, which are first-come, first-served. They also allow tent campers to use the spots. A great deal for fifteen bucks. I’d been nervous about finding a spot, but they were all available as I rolled in. More cities should have this option. It would make this ride a lot easier.

I crossed the Red River and was surprised at how unriverlike it was. This portion of it was a tiny stream in a wide valley. So many shootouts for this?

My only refill stop for the day was in Wellington. As I was rehydrating in front of an Allsup’s, a customer stopped and asked where I was going. She told me there was a nice park thirteen miles north and added they might even have showers. I took this as a comment on my general appearance. I guess it was pretty obvious I hadn’t showered in a couple days. I finished my snack and rode off to find this park. Sure enough, nine miles later I was at Collingsworth County Pioneer’s Park, a great place to rest in the shade before climbing the hills that kept going all the way to Shamrock. I didn’t check to see if there were showers. In Shamrock, my first stop was Blarney Stone Plaza, which claims to have an authentic stone from Blarney Castle. Town leaders persuaded the Irish to send it to Shamrock in 1959 so they could promote Ireland. Sure, sounds good, but I wasn’t about to kiss it, not in these times.

For a while my back tire had begun to wear down much faster than my front tire. It was a thing I started taking note of before arriving in Texarkana. I should have swapped them then, but I kept putting it off. I took the rest day to fix this situation and do a little extra maintenance on my bike. I also got some laundry done and explored Shamrock’s finest cuisine, from McDonald’s to Taco Bell.

I took my time leaving Shamrock. I only had about fifty miles to do, but I knew the next day would be long and I wanted to take it easy. Wheeler was my only refueling stop for the day. There I bought a brisket burrito and petted a sweet dog waiting outside for her owners. I ate half my burrito, wondering what River, my dog, was doing at home. Then I hit the road.

It was pretty hot that day and the hills were no joke. The entire ride was up and down—mostly up—with little shade. An hour outside Canadian, I found a spot of shade along the highway to finish my burrito. It wasn’t quite as relaxing on the side of the road as it was back in Wheeler with the company of my new friend. But the burrito was good, even with the dust being thrown up by trucks passing at 70 miles per hour. The last five miles of my ride were amazing, probably the best five miles of the trip so far, cruising along small canyons and past bluffs. One of these bluffs is improbably adorned with a fifty-foot-long green dinosaur statue, which artist Gene Cockrell titled Aud after his wife, Audrey. The ride was mostly downhill, with plenty of zigs and zags. I arrived in Canadian to discover that the town also had public RV/camping spots, just like Childress, right next to the Canadian Rodeo Arena. I hoped that this was a trend.

This was a hard day. It started off well enough as I left Canadian on U.S. 60 toward Oklahoma. The winds were in my favor and I was coasting along without a care in the world. The 25 miles to Higgins went quickly, chasing trains and passing through hilly fields of tall grass. I rode a couple miles more to the Oklahoma state line, took a photo, and turned around. After refueling, I turned northward to Follett. Once I was on FM 1454, a strong tailwind propelled me like a rocket all the way to town. That’s when things turned nasty.

At Follett, I turned left to head west to Booker, a short twenty miles away. But now that tailwind had turned into a crosswind, gusting at up to 27 miles an hour. It was a constant battle to keep my bike straight. And it was nearly impossible to keep up a decent speed. It went on like this for the entire twenty miles. By this point, the heat was stifling—over 95 degrees. I pushed on, trying to remember to take my time and rest plenty. Eventually I made it to Booker, but even after eating and showering, I was in a dark place. The distance, sun, and wind had done a number on me. I was missing my family and home. I was dreading the week ahead. Talking with my wife, Sofia, on the phone, and texting with my friend and Austin Beer Guide business partner Josh Spradling, both helped greatly. When I started this project, I knew I would have bad days. I just hoped they would never come.

It turned out I may have been a little dehydrated and exhausted the night before. I woke up with a whole new attitude. Mercifully, the winds had shifted and were now blowing south, which is the way I was headed, for a while anyway. With a gut full of bananas, coffee, and water, I hit Texas Highway 15 west out of Booker, fighting the crosswinds for a bit until the road turned southward. I sailed with the winds past small farm towns like Waka and Farnsworth, each sporting their local skyscrapers in the form of grain elevators. When I arrived in Spearman just before noon, locals were lined up at the gas station waiting to buy their Sunday beer. Many of the towns in the Panhandle are dry, but not Spearman. I followed their lead and bought a couple tallboys to enjoy later on in Gruver, a dry town. It was thirteen miles northwest to Gruver, straight into the wind. I psyched myself up and pushed off.

The ride was rough, but I tried to have fun with it, shooting videos of tumbleweeds and taking frequent breaks to reward myself with Swedish Fish. The night before, I’d put out a call online for a possible place to pitch my tent in Gruver. Through the magic of social media, Parker Grotegut reached out to say he was saving a place for me at his motel, the Main Street Inn. I arrived in Gruver and texted Parker to let him know I had made it. He met me a few minutes later and showed me to my room. When I offered to pay, he told me it was on them. Wow, Gruver is groovy!

I woke before sunrise so I could get a jump-start on the winds. I had to ride forty miles to Stratford before turning south to Dalhart. Heading west on Highway 15 in the dark was a little spooky, with no lights but my bike light and the stars. There wasn’t much to see for the first hour. I could only hear cows bellowing somewhere in the blackness. An hour outside Stratford the crosswinds had picked up substantially, but the idea that they would soon become tailwinds kept me going strong. In Stratford, I had a perfectly normal lunch of egg rolls and tater tots. The fried food was comforting since the temperature in the morning had been in the high forties. Back on the road, this time heading south on U.S. 54, I soaked in the sun and relished the powerful tailwinds. Nine miles outside of Dalhart, I crossed Chamberlain Road in a tiny town called Chamberlin. Not sure who screwed up there, but it was nice to pass through my namesake before ending the long ride. It really was a long ride, but I was glad it ended with help from the wind gods.