There’s really no good reason to do what I am doing, riding around the entire state of Texas on my bike. Last year I rode my bike on every street in Austin, and as I was finishing that 385-day, 4,900-mile project, my mind started to wander to the next challenge. That’s when the idea to circumnavigate Texas came to me. I started doing research on which decent roads I could ride to get closest to the boundaries of the state. As far as I can tell, I’ll be the second person to do it, following Buddy Boren. He completed the ride twice, in 2000 and 2005, to raise funds for cancer research.

The journey will take a little under two months and cover 3,046 miles. I’ve lived in Texas for twelve years and have spent most of that time in Austin and the Brownsville area. I think after this trip I’ll have a greater sense of what and who Texas is. 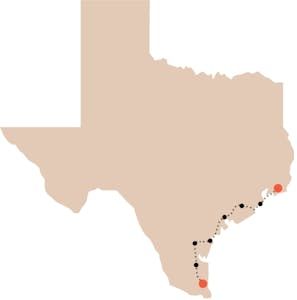 When the coronavirus pandemic hit, my ride—like so many other plans—was up in the air. At first, I figured I’d have to cancel. But by July, I was leaning toward making the journey. I’d been riding twenty to fifty miles a day, social distancing, and working from home. These were all things I could do from the road, as long as I could rustle up some Wi-Fi. I planned to ride counterclockwise, starting and ending in Brownsville. After getting the green light from my wife and the team at Texas Monthly, I got my bike tuned up, gathered all the necessary gear, loaded up the family, and headed for Brownsville on August 29. I was not able to sleep much the night before taking off, knowing what lay ahead.

On the way to the starting point, Xeriscape Park right in front of the Gateway International Bridge, I realized I’d forgotten sunblock. After a quick gas-station stop, I was good to go. Joe Aguilar, owner of J.T. Cycling Bike Shop, and mechanic Kevin Velez met up with me to ride together until Harlingen. After taking a few photos, we hit the road. I originally had planned to take Brownsville’s Historic Battlefield Trail, a pleasant and well-maintained asphalt trail running the length of the city. But with a strong tailwind and only light traffic in the morning, Joe suggested we just zip up the frontage road. I’ll always go with local knowledge over Google Maps. Before I knew it, we were zooming through San Benito and Harlingen. We parted ways as I left Harlingen; I put my head down and pedaled on toward Raymondville. I ended the day in Rudolph, a tiny town fourteen miles north of Raymondville, along U.S. 77. I made plans to meet Sofia, my wife, at a rest area on 77. She drove me back to her parents’ house in Rancho Viejo for the night.

This was one day I was slightly worried about. From the point where Sofia dropped me off to Riviera, on U.S. 77, there was no refuge from the sun, and I’d be sharing the road with cars and trucks driving 75 miles per hour. Luckily, there was a huge shoulder to keep me away from the traffic. I got a minute of shade as I passed through the Border Patrol checkpoint in Sarita. I can’t imagine they see a lot of cyclists coming through. I’ve traveled this road for twelve years, driving back and forth to Sofia’s parents’ house, and I’d never seen a cyclist. When I got to the front of the line, I was asked the usual question: “American citizen?” With my affirmative answer, I was waved through. The rest of the ride was uneventful, though the highway was littered with lone gray foxes and families of wild boar. Or maybe they were javelinas; I wasn’t about to pull over and inspect the corpses. My host for the night in Kingsville was Bob Kuenzle, a bike and windshield repairman. He runs his bike shop out of his home on the west side of town. After work, he came out to chat with me about my ride and the (booming) bicycle business in the time of COVID. His backyard served as an excellent spot to pitch my tent and sweat through the night.

Around 5:20 a.m., I figured that if I was  sweating, I might as well be riding. I packed my gear, loaded up the bike, and hit the road to Corpus Christi. I spent the majority of the day on country roads. It was the ultimate social distancing: just me and the wind turbines. Bicycles aren’t allowed on the causeway that connects Corpus Christi to North Padre island. I needed to hitch a ride across, so my brother-in-law, Eric, set up one for me from his cousin Lony Castillo. We met up at the Pizza Hut next to the causeway and loaded up my bike and gear. After a quick ten-minute crossing, we said our goodbyes and I pedaled toward the beach. Along the way I stumbled upon Padre Island Burger Company, where I ordered an egg sandwich and a beer to enjoy solo on the patio. The egg sandwich was surprisingly tasty and substantial. The beer, a Lagunitas IPA, went down fast, so I ordered another. Soon I was back on the road. I underestimated those last eighteen miles. With the wind and that second beer, it was a brutal end to the day. Lesson learned: keep to one beer while riding. I was happy to be staying with my family in a hotel for the night.

The day started with a quick sunrise ferry ride to Aransas Pass, then a lovely coastal ride around Rockport-Fulton. It was hot, with nary a cloud in the sky. A great day for the beach, but I was riding away from the beach on my way to Port Lavaca. I hopped on Texas Highway 35 and crossed the Lyndon B. Johnson Causeway. At times it felt like I would never find a spot of shade. About 38 miles in, I spotted an oasis in the distance, a rest area with shaded picnic tables. Unfortunately, the shade structures turned out to be just rusty frames, missing their roofs. Luckily there was one small tree under which to huddle. Then I was back on the long and sweltering road, across the Victoria Barge Canal and multiple bayous. After seventy miles I was greeted in Port Lavaca by Sofia and the kids, who were swimming in the hotel pool. I just wanted a shower, followed by beer and pizza.

I felt sluggish after a long day in the saddle the day before. Rain poured for the first hour as I crossed the long bridge over Lavaca Bay and into the marshland along Highway 35. Later, I passed through dozens of cotton fields, most harvested, a few in full bloom. A big surprise was Blessing, a perfect quaint, tiny town to pass through on a road trip. A bar called the Wet Spot looked like the perfect dive; unfortunately, it wasn’t open. At a gas station nearby, I met a stray dog who was begging every patron for a scrap of food or an ear rub. Apparently the dog was a bit of a nuisance for the station, as a sign read “Please DON’T let the dog in!” I watched an employee coax the dog out of the store many times as I sat nearby, drinking a Fanta and chowing down on a couple bags of mixed nuts.

Revived, I pushed on to Bay City, where I was greeted by Le Tulle Park, a beautiful green space lush with gigantic live oaks. I couldn’t stay long, because the mosquitoes were out in full force. I sped to our hotel, beating my family there. Sofia and the kids were still at Matagorda Beach, where they experienced their first Trump boat parade and found a store advertising a mask-burning party set for November 4, the day after the election.

I kissed the family goodbye and hit the road for Surfside Beach early in the morning. While taking a break at a Citgo station in Jones Creek, I got several words of encouragement from two elderly ladies, one behind the counter and the other a regular customer. Feeling enthused after that rest stop, I made it into Freeport without much effort, zipping through industrial areas all the way to Texas Highway 332. There I was met with a seemingly endless line of cars headed to the beach for Labor Day weekend, plus a Buc-ee’s so crowded that employees were stationed in the parking lot to conduct traffic. Back on the highway, it felt amazing to pass cars that were crawling toward the beach.

I felt less amazed when I saw the bridge I had to cross over the Intracoastal Waterway. It was my first epic climb of the trip. I dropped into an easy gear, spun my way to the top, and coasted down. I continued north up the American-flag-lined Gulf Road to Public Beach Access No. 1, where I rode my bike along the beach to meet my family under an easy-to-spot landmark: a red octopus kite.

On Labor Day, it seemed fitting to ride along beaches all day. The day’s ride took me along the majority of Surfside Beach, the entirety of Galveston Island, and up the Bolivar Peninsula. Once I reached Galveston, I slowed down and took my time weaving among the tourists on the seawall. I was hoping to find a brewery that was open while I was in town. All I could find was Brews Brothers, which does not actually brew its own beer, though it has all the equipment. There I met a fellow cyclist named Clay Witherspoon. A retired Coast Guard sailor, he rode up on a recumbent tricycle. He was indulging in two of his favorite vices, an IPA and a dark chocolate bar from La King’s Confectionery, while his wife and daughter shopped. We chatted about the Coast Guard, the house his parents had on Lake Travis, and his favorite bar in Matamoros from the late sixties. Before I knew it, I had broken my rule and finished two beers. I knew then I had to part ways and catch the ferry to Bolivar Peninsula. Once on the peninsula, I had a pretty good tailwind and made it to High Island, 28 miles away, in less than two hours. My family had gone back to Brownsville earlier that day, so I was camping at an RV park. After being swarmed by mosquitoes, I lay in my tent, reflecting on the past week and visualizing the next seven. I’ll mostly be on my own for the rest of the trip. If the next week goes as well as the first, I will be a happy camper. And that’s good, because from here on out, I will be camping a lot.

Editor’s note, November 2: This story has been updated to state that the author was preceded by Buddy Boren, who circumnavigated Texas by bike in 2000 and 2005 to raise funds for cancer research.