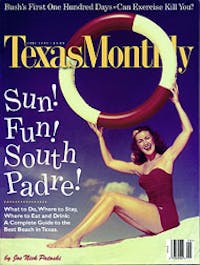 Depending on the time of year, Padre can be a haven of hedonism or a festival of family values. Think of it in terms of five seasons.

Summer, the first season, is peak time, because everyone wants to cool off. But even if the restaurants are packed, the roads are clogged, and the prices are inflated, there is still plenty of room on the beach. Although the majority of visitors are Texas families–South Padre is the state’s number one beach destination–almost a third of the summer business is generated by Nationals, as the wealthy Mexicans (mostly from the Monterrey area) are known; to them, South Padre is as much a resort as Cancún is to Anglos. If you can wait until the period from mid-August to Labor Day, you’ll be happy to discover that the weekday crowds thin out considerably, because many Texas schools begin their fall semesters early.

During the second season, from Labor Day to Thanksgiving, the island reverts–more or less–from a tourist mecca to a semi-normal small town of 1,800. This is the prime time to savor South Padre’s charms. The furnacelike temperature drops into the low 80’s or high 70’s, the fishing becomes more consistent, and on the occasional day, the Gulf even takes on a Caribbean clarity.

The third season, from December to late February, is when lodging rates are the lowest and snowbirds from the north descend in droves. In the fourth season, that serenity is broken, as 100,000 college students arrive for Spring Break, and then, a few weeks later, Mexicans come up for Easter Week (semana santa). Take my advice: stay away unless you love crowds. By late April, it’s time for the short fifth season, which quietly runs through the end of May–when the summer begins all over again.

Clothes, of course, but dress casual. This is, after all, an island. Short-sleeved shirts, shorts, cutoffs, swimsuits, and sandals set the style, even in hoity-toity restaurants. Bring plenty of sunscreen and a hat, because the sun is extremely intense. Take a trashy novel. Toss a Frisbee into your bag too. And, of course, bring cash, though don’t worry about bringing enough. There are at least seven automatic-teller machines.

If you’re driving, take U.S. 77 to Texas Highway 100 and then drive east for 26 miles to the Queen Isabella Causeway.