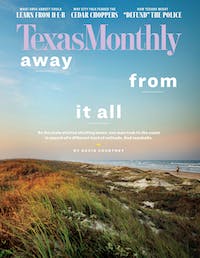 Does lugging your weary psyche into a deep, dark wood sound pretty good right about now? Do you long to just sit and think beneath the sheltering branches of impossibly tall trees? The occasional foray into nature is a tonic in the best of times, but lately it feels downright critical. “When a wild landscape is lit with birds and ribboned with animal presence, it tells us that all manner of living things are well, and it draws us inexplicably into a shared happiness,” writes British author and nature activist Jay Griffiths. No, our wild places aren’t immune to modern-day problems. They too are subject to disasters, natural and otherwise. But there’s no overestimating how much an addled mind can benefit from spending a little time where the air is fresh and the birds are chirping obliviously and a six-foot span is easy to come by—a place like Tyler State Park, which my travel buddy, Emily, and I visited in a carefree July 2019, which I write about now in an uncertain June 2020 for publication in an unpredictable August.

It’s no wonder we humans find solace in the bend-with-the-wind resiliency of pine trees, the calm constancy of sturdy retaining walls whose every heavy rock was laid by hand, the tenacity embodied in a painstakingly constructed beaver dam. Our world feels tenuous, as do any vacation plans we might have made back when we were on more solid footing. Our state parks have reopened for day use and limited overnight visits; soon, we may all be happy campers again, roasting wienies and sleeping under the stars. But until then, there’s no harm in indulging in a little reminiscing. Just recalling the sounds of summer at Tyler State Park—the gleeful chatter of children frolicking in the water, the ferocious bark-bark-bark of 10-pound dogs guarding 10,000-pound RVs, the somnolent croaking of frogs at dusk—brings me some comfort. For a moment, let’s just pull the Pine Curtain closed on our collective heartache and anxiety.

When I think of an ideal state park, a sylvan set piece worthy of a Wes Anderson movie, this is it. Out where post oak savannah meets the Piney Woods, almost exactly halfway between Dallas and Shreveport, Tyler State Park seems to have fulfilled the high hopes set out for it in May 1937, when the Tyler Journal predicted that it was “destined . . . to become the major playground in East Texas.” Stitched together from land sold to the state by private owners two years earlier, it is now a glorious 985.5 acres of hiking trails and well-spaced campsites, with a crown jewel of a lake at its heart. Ringed by dense groves of pine and hardwood trees and fringed by feathery marsh, the 64 acres of clear spring-fed water are often dotted with colorful floats, gliding kayaks, and small boats whose occupants motor past the wooden diving platform at the posted 5 miles per hour, find a spot to anchor, and fish for bass, catfish, and crappie.

Architect Joe C. Lair abandoned the rustic style that prevailed in many parks in the thirties, instead channeling Frank Lloyd Wright and the Prairie School aesthetic in his design of Tyler State Park’s striking minimalist structures, including the bathhouse and boathouse.

If that’s not picturesque enough for you, ascending from the swimming area is a gently sloping lawn, where straw-hatted parents unload mountains of food onto picnic tables and chase their excited kids with sunscreen in hand. At the crest of the hill, off to the side, is the park’s original bathhouse, designed by architect Joe C. Lair (see “A Modern Look,” above). The brown, low-slung structure emerges from the landscape, its trapezoidal hipped roof lending a mushroom-like feel; as you approach the building from the parking lot, the breezeway between the men’s and women’s changing areas perfectly frames the blue lake, becoming an unassuming yet grand portal. Next door, built in the same style, is the park’s store, the Silver Canoe, selling snacks, souvenirs, camping gear, and kids’ stuff and offering paddleboats, canoes, and kayaks for rent. Out back is a round, smooth patio that decades ago hosted live bands and dancing couples and now has lake-view tables for enjoying a bag of chips or an ice cream sandwich.

Even the park staff seems straight out of central casting. At one point, about to embark on an afternoon float, Emily and I froze in our flip-flops, tubes and coolers precariously balanced, when a khaki-clad, official-looking guy stepped out of his white pickup and said, “Y’all weren’t planning on swimming, were you?” Seems there had been a dragon sighting in the lake. Of course. We laughed and got in the water.

In 2005, in painfully prosaic fashion, the Seventy-ninth Legislature commemorated the seventieth anniversary of the park with House Concurrent Resolution 18: “Among the park’s most distinctive features are the hand-hewn rock walls and other structures designed to prevent soil erosion . . .” What the esteemed body was trying to say is that Tyler State Park is yet another brilliant production from the Civilian Conservation Corps, a component of Franklin Delano Roosevelt’s New Deal, dreamed up to ease (and employ) a shaken country mired in an existential crisis of its own.

Starting in 1935, CCC Company 2888, working under the direction of landscape architect Ben K. Chambers, took land that had been decimated by agriculture and timber harvesting and set about bringing it back to life, building dams and terraces to stave off further erosion and planting six hundred acres of native trees and shrubs raised at a nursery on-site. Meanwhile, their adventures and travails were dutifully and succinctly documented by local newspapers: “hold 3 men for liquor at CCC camp—group reported to have had bootleg whisky at Sand Flat camp” (Tyler Morning Telegraph, November 3, 1935); “CCC boys go for tap and ballroom dancing, dramas, and public speaking at Tyler State Park camp” (Tyler Courier-Times-Telegraph, July 16, 1939); “CCC open house attracts 8000 visitors to Tyler State Park Sunday” (Tyler Morning Telegraph, April 8, 1940).

Years later, all that meticulous planning and hard work have paid off in a piney paradise that “Roosevelt’s Tree Army” would hardly recognize. There are 13 miles of trails, lyrically named (the hiking-only Whispering Pines and Lakeshore) and less so (the A, B, C, D, and EZ loops, which also allow biking). At 2.1 miles, Lakeshore is a lovely, mostly shady stroll, ending (or beginning, depending on where you start) at a petite birdwatching peninsula and children’s playground. To the tune of cicada song, Emily and I meandered down the path, stopping to study secluded pockets of still water carpeted with yellow water lilies and marvel at a huge toppled tree, its massive root system branching out above our heads like a giant bronze sculpture. At various intervals along the trail are log benches where one can rest and contemplate the water and reflect on how shocked everyone must have been when, in 1963, a one-hundred-foot section of dam broke and released all of it. WBAP-TV, in Fort Worth, reported tales of tree-climbing downstream farmers and bewildered resident game fish, “nearly all of which apparently survived the dam break and now are merrily swimming down the Sabine River.”

The Whispering Pines trail is a short and easy one, just a mile, but the ground it traverses is a microcosm of the bottomland hardwood and pine forest that characterizes the surrounding area. Enveloped in lush, almost jungle-like greenery, we trod a path of pine needles and crackly leaves through mockernut hickories, Eastern red cedars, flowering dogwood, and lots and lots of skinny loblolly and shortleaf pines standing upright, lying on the ground, or hovering in between, caught midfall in the arms of their neighbors, a brief interruption in the reassuring cycle of perpetual renewal on display all over the park. A pileated woodpecker searches a decaying log for beetle larvae; a fat white mushroom sprouts out of a fire-blackened tree stump, its pearly flesh as enticing as a toasted marshmallow.

All throughout the walk is evidence of the thoughtful landscape design conceived long ago, like concrete steps made to resemble tree stumps and, as an informational sign along the trail puts it, strategically placed “rock rapids and falls for aesthetic and musical sound effect.” The latter contribute to a watery network of Thumbelina-size creeks and streams visited by tiny frogs, blue-winged butterflies, and jewel-toned dragonflies.

Speaking of water, as shady as this park is, the summer heat is fierce, which makes the blue oasis at its center more than just pretty scenery. An early morning kayak trip is sublime, a quiet ride across sparkling, breeze-rippled water, silver-green fish swimming alongside and turtles lined up on submerged logs like jets on a runway, letting you get only so close before releasing their grip and rolling sideways into the water. In the evening, you’re likely to have the whole thing to yourself as the sun sets behind the trees and casts a rose-gold hue over you and your sparkling domain.

In the heat of the day, though, when the clouds are at their whitest and the sky at its bluest, complete immersion is a must, perhaps followed by a long, lazy float atop your inflatable of choice, with nothing to interrupt but the occasional mosquito or excited child hollering from the shore, his enthusiasm matched by his volume (“We have to see if the big bass are out!! They’re usually out when the water’s calm!!”). You could lie that way all day—or at least until the sun descends and brings with it a surprising melancholy, a wistfulness for the carefree, waterlogged happiness you are still at that very moment enjoying. Would that we could stay that way forever, our bodies, made up mostly of water, impossibly fragile, rocked by gentle waves and exposed to nothing more threatening than mosquito bites and sunburns and an apocryphal dragon.

This article originally appeared in the August 2020 issue of Texas Monthly with the headline “Pining for Some Peace of Mind.” Subscribe today.