When hunting for the ideal gifts for your fellow Texans, there are three key parameters to keep in mind: utility, provenance, and pride. Ask yourself, would the item help the recipient be a better Texan? Is it made or designed in the state and/or by a Texan? And would owning said item further deepen the recipient’s love for his or her native land? We’ve sniffed out a sampling of products that we think fit the bill–and that you may wind up gifting to yourself too. (You’ll also want to consult our previous gift guides from 2014 and 2015 for even more evergreen ideas.) 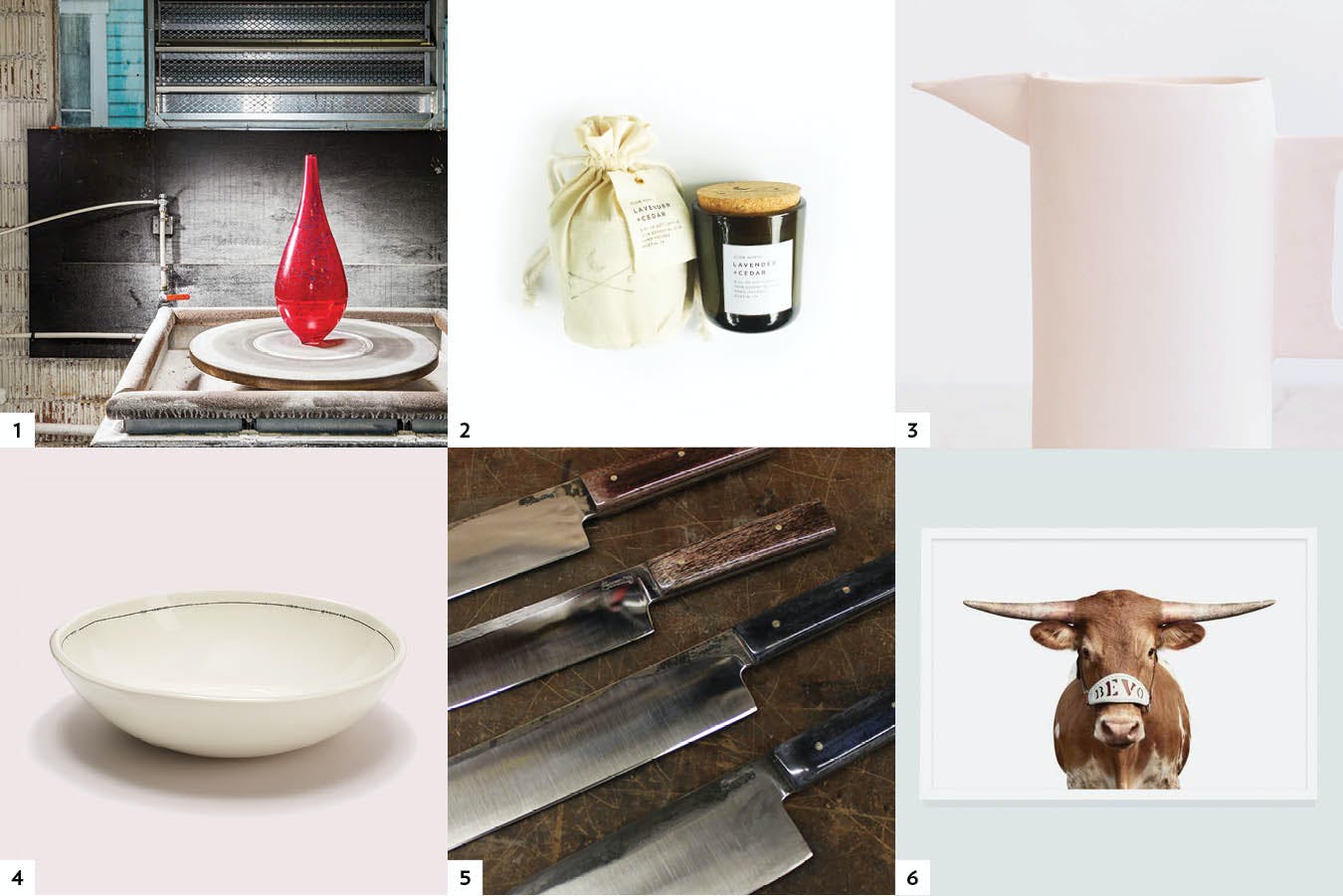 1. Brad Pearce glass vase // The Corpus Christi glassblower has been refining his signature vases, light fixtures, stemware, and other pieces—known for their bold colors and pattern of undulating lines—for nearly fifteen years. If you’re interested in one of Pearce’s custom works, call to book a shopping appointment or contact him through his website. (Read more about Pearce’s process: “Made In Texas: Brad Pearce Glass.”)

2. Slow North candle // Synthetic chemicals are banned from founder Michelle Hartle’s Austin studio, which happens to be fully powered by renewable energy sources, so you can breathe easy when you light these all-natural soy candles.

3. Guten Co. blush pitcher // The striking, minimalist ceramic pieces that Sarah Sauer makes in her San Antonio studio—like this made-to-order, dishwasher-safe pitcher—are as much works of art as they are useful homewares.

4. Keith Kreeger Studios essential serving bowl // Some thirty-six restaurants around the country serve their food on the Austin potter’s signature dishes, but they’re not so chichi that you’d feel silly using these bowls on your own humble table.

5. Serenity Knives chef’s knife // Channel the untroubled calm of a Zen master as you chop vegetables with one of Russell Montgomery’s high-carbon steel blades. (Read more about the Houston bladesmith’s philosophy: “Made In Texas: Serenity Knives.”)

6. Randal Ford’s Kingdom animal prints // The Texas Monthly contributing photographer has trained his lens on a small zoo of creatures big and small, including a number of Texas critters, like the indomitable horned frog, and even the latest incarnation of the University of Texas’s mascot, Bevo XV. 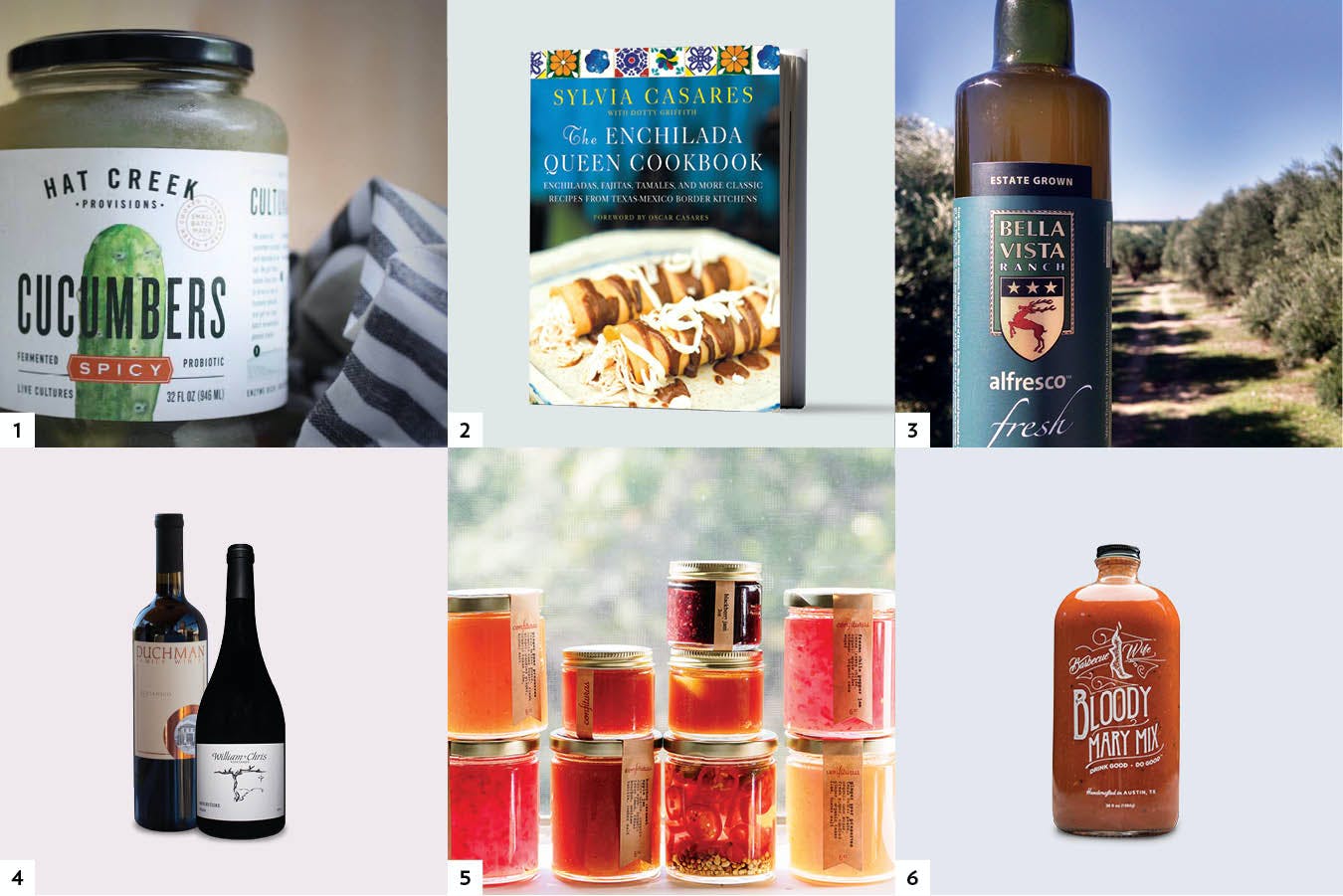 2. The Enchilada Queen Cookbook // Many of the same recipes that Sylvia Casares learned from her mother and grandmother growing up in Brownsville—and which are now on the menu of her popular Houston restaurants—have made their way into her first cookbook. Get a sneak peek of five of her recipes: “‘Enchilada Queen’ Sylvia Casares Shares Her Secrets In A New Cookbook.”

3. Bella Vista Ranch olive oil // The more than a thousand olive trees on this Wimberley spread produce some of the finest oils, which are “fresh off the press” every fall. (Read more about visiting Bella Vista and other nearby attractions: “Trip Guide: Wimberley.”)

4. A bottle of Duchman Family Winery Aglianico 2012 or William Chris Mourvedre 2015 // Texas Monthly’s resident wine expert, Jessica Dupuy, who is a certified sommelier, has these two wines on her own gift-giving list. She likes the “big and sturdy” Aglianico for its notes of dried cherries and figs and says it’s a perfect complement to holiday dishes, while the Mourvedre, with its notes of tart cranberry, is ideal for those who like “a lighter wine that still has a little backbone.” Check out Dupuy’s lists of the year’s best bottles for more options: “Top Texas Wines: Spring 2016 Edition” and “Top Texas Wines: Fall 2016 Edition.”

5. Confituras jams and preserves // Though named for the French word for preserved foods, this company is thoroughly Texan: owner Stephanie McClenny and her team make each small batch by hand in Austin, often with fruit they’ve foraged in the Texas countryside. (Read more about “putting up” and get McClenny’s peach preserves recipe: “Cook Like a Texan: Putting Up.”)

6. Bloody Mary Mix by the Barbecue Wife // Hand-smoked spices and, yes, a little barbecue sauce, are the secret weapons in Catherine Stiles’s all-natural recipe. Pour yourself a drink and prepare for Texas Monthly’s next big barbecue list, set to drop in June 2017, by making sure you’ve tried all of the meats on our most recent lists: “The Top 50 Best BBQ Joints…In The World!” and “The Top 25 New And Improved BBQ Joints in Texas!” 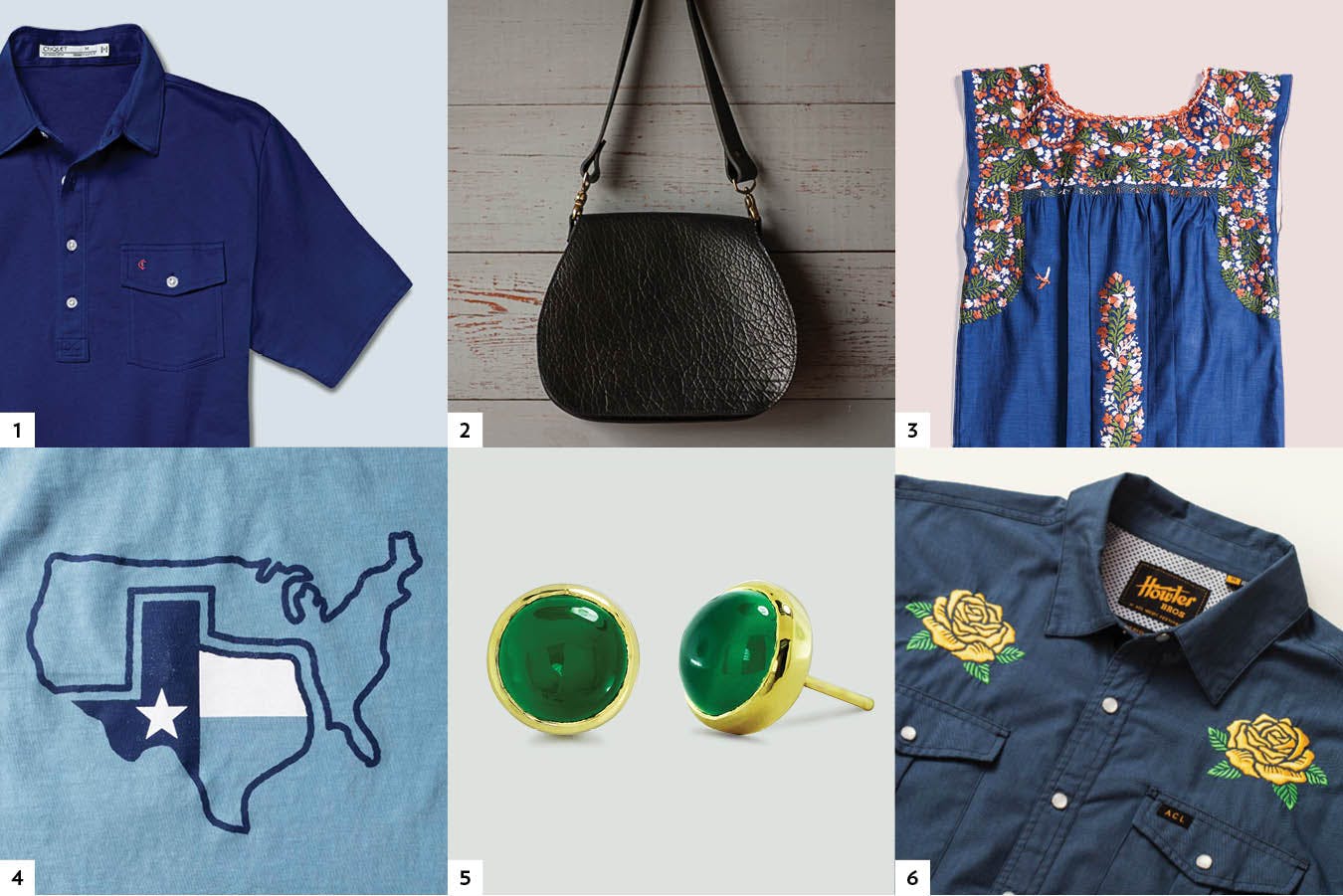 1. The Players shirt by Criquet // A classic polo, designed in Texas, that eases the morning dilemma that is “What should I wear today?” A nice touch: removable collar stays.

2. The Nash Bag by Stash // Made out of buttery bison hide with hand-finished edges, this handbag is crafted in an old mattress factory in Sealy. (Read more about maker Cheryl Schulke’s process: “Made In Texas: Stash Co.”)

3. Mi Golondrina embroidered cotton blouse // Bequeath a little Oaxacan style, by way of Dallas, where each of these intricate blouses, dresses, and skirts get their finishing touches after being embroidered, crocheted, and pleated by hand in Mexico. (Read more about designer Cristina Lynch’s vision: “Made In Texas: Mi Golondrina.”)

5. Green onyx Mili earrings by Ila // Splurge on a pair of delicate but bold baubles from Houston-based sister-brother design duo Ila and Vikas Sodhani, whose popular jewelry line draws inspiration from both their Indian heritage and Texas upbringing. (Read more about the pair’s creations: “Made In Texas: Ila.”)

6. Howler Brothers Yellow Rose of Texas gaucho snapshirt // What Texan wouldn’t feel a swell of pride for the Lone Star State while donning a pearl-snap shirt embroidered with two flaxen flowers? For more about “The Yellow Rose of Texas,” penned in the 1850’s, and considered by many to be one of our official unofficial state songs, read Christian Wallace’s “Texas, My Texas, You Deserve a New State Song.” 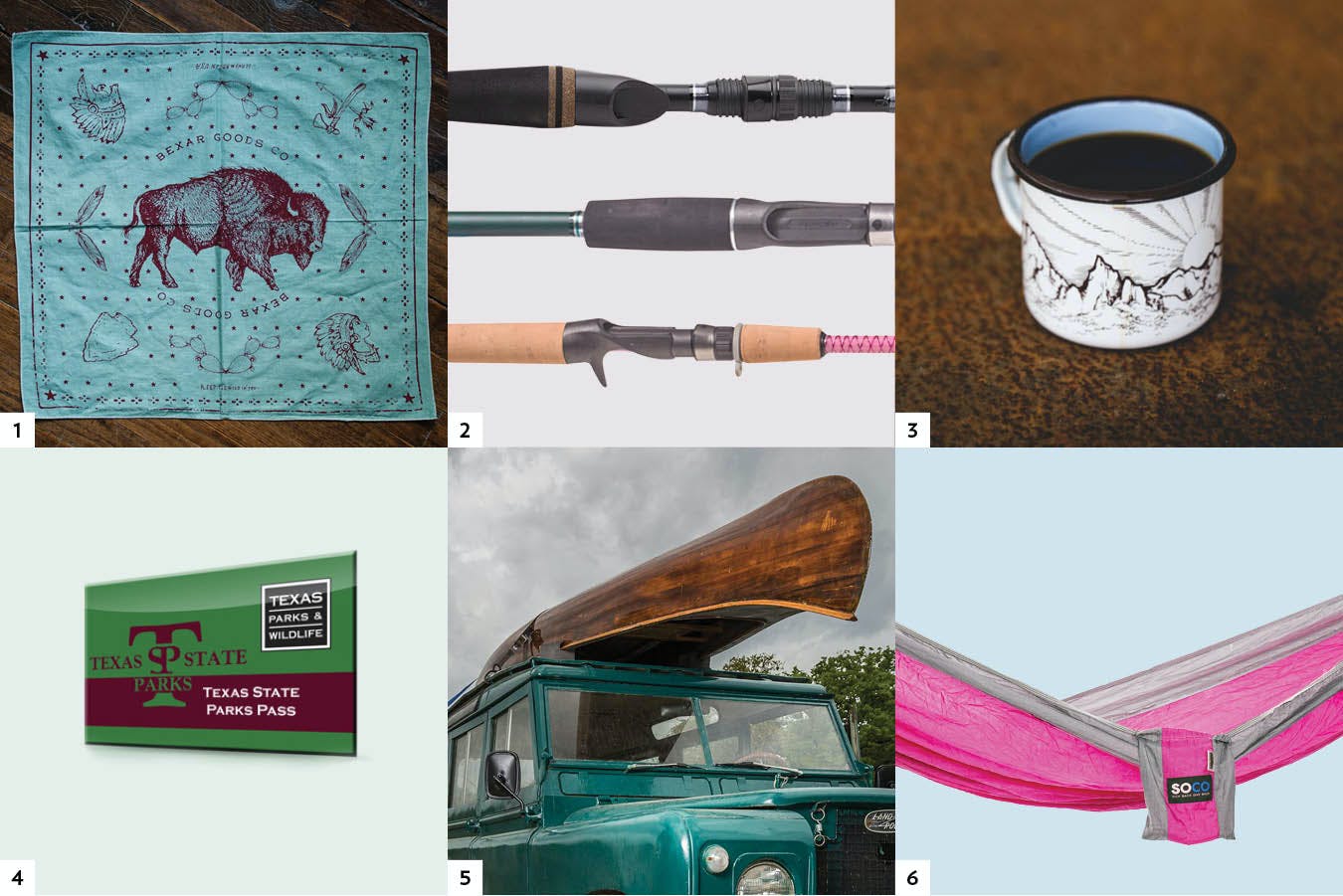 1. Bexar Goods “Keep It Wild” bandana // Not only will this hand-dyed neckerchief aid in shielding your neck from the sun or your brow from perspiration, it’ll also help recalibrate your perspective with its featured slogan: “Keep the wild in you.” (Read more about the San Antonio–based company and its leather goods: “Made In Texas: Bexar Goods.”)

2. CastAway fishing rod // Yes, Texas Parks and Wildlife has an excellent Tackle Loaner Program for those just dipping their toes into the sport, but serious anglers will find these professional-grade rods, made out of Houston, to be a worthwhile investment.

3. Big Bend enamelware mug // Texas artist Jackson Robinson’s wrap-around illustration of the Chisos Mountains will make you wonder why you’re sitting around drinking coffee in the city when you should be out traipsing through the majestic West Texas range. Clip the mug to your pack and consult our blowout guide to Big Bend before heading out on your next trek.

4. Texas State Parks Pass // This makes our list every year, and with good reason—well, actually there are more than ninety good reasons scattered across the state, from Balmorhea State Park, with its beloved spring-fed pool, out in West Texas, to Goose Island State Park, where you can set up camp near Aransas Bay. Check out our ten pre-planned state park itineraries: “Into the Wild.”

5. Caddo Watershed wooden canoe // Starr Bowen’s canoes, carefully crafted by hand, don’t exactly roll off the assembly line. Each one takes hundreds of hours to complete, making them the kind of once-in-a-lifetime dream gift that you typically find only in the Neiman Marcus Christmas catalog. (Read more about the Methodist pastor’s carpentry skills: “Made In Texas: Caddo Watershed.”)

6. SoCo hammock // A commitment to fair-trade manufacturing practices is what fuels this Austin-based company, which also aims to have you lazing about in both style (the single and double hammocks come in a rainbow of colors) and comfort (they’re triple stitched!). 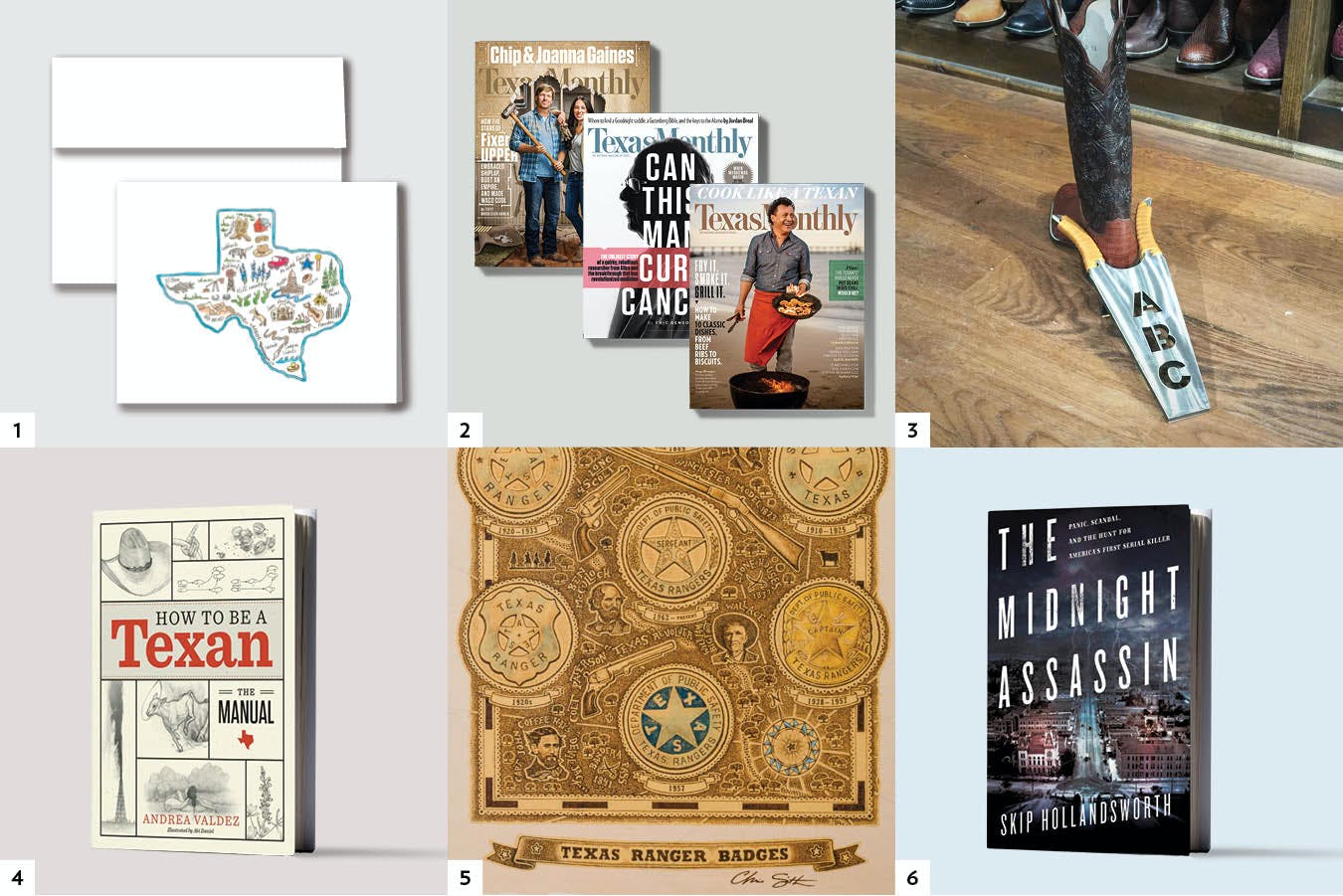 2. Texas Monthly subscription // We’ll just go ahead and say it: sending someone a subscription to the national magazine of Texas, be it print or digital or both, is the finest way to show your loved one—or your new neighbor who just moved here from California—how deeply you care about his or her Texas literacy. Because the best Texan is a well-informed Texan.

3. Metals Unlimited custom boot jack // Your boots are monogrammed, so why shouldn’t your boot taker-offer be too?

4. How To Be a Texan: The Manual // If the title’s not enough of a selling point, consider a few of the important life lessons that TexasMonthly.com editor Andrea Valdez’s essential Texas tome will teach you, including, but not limited to, how to brand the herd, how to host a tamalada, how to survive cedar fever, how to cook brisket, how to noodle for catfish, and how to float the river. (Read the column that inspired the book: “The Manual.”)

5. Smith Map Studio Texas-themed maps // Christopher Alan Smith dives into Texas history so he can accurately depict the landmarks, battlegrounds, cattle trails, weaponry, and Lone Star icons that adorn his hand-drawn maps. His originals can cost upward of $800 but prints are reasonably priced. (Read more about the Liberty Hill–based mapmaker: “Made In Texas: Smith Map Studio.”)

6. The Midnight Assassin: Panic, Scandal, and the Hunt for America’s First Serial Killer” // The diabolical killer who terrorized Austin in the late 1800’s was most certainly on the naughty list, but you’ll earn points with the bookworms and history buffs and murder-mystery fans on your list when you gift them Texas Monthly executive editor Skip Hollandsworth’s thrilling narrative.

The Gift Shops That Keep On Giving

By Jordan Breal
The Culture

Our Made in Texas 2021 Holiday Gift Guide

2021 Made in Texas Gift Guide: For the Entertainer