By the time August rolls around, we overheated Texans are fully fixated on water. There are rivers to float and lakes to swim, natural springs to soak in and seashores to boogie-board along. But nothing offers as complete a respite from the sun’s oppression as a deep dive. Despite having no Caribbean-esque depths to survey, Texas scuba enthusiasts take the plunge anyway, at sites not entirely natural (like the man-made Lake Amistad, in Del Rio) and often creatively repurposed (like a 174-foot-deep nuclear missile silo near Abilene).

An old clay quarry in East Texas is now one such aquatic playground. When Calvin and Shannon Wilcher bought the place, in 1987, it was littered with abandoned refrigerators and furniture. They had to haul that refuse out before hauling in other, cooler pieces of junk, like a discarded triple-decker party barge, an old space capsule, and a decommissioned Lockheed C-140 JetStar, which have been laid to rest on the bottom of an 8-acre, 35-foot-deep reservoir. On the best days, visibility can stretch 70 feet. You won’t see a lot of fish (the pH levels in the warm, spring-fed water are too low), but you can make like one as you dart in and out of Ray Price’s first tour bus or hunt for “treasure” (usually a golf ball that you can exchange for a prize at the fully stocked gear shop) along the lake bottom. 500 N. Murchison, 903-675-5762, athensscubapark.com

Mined for more than half a century, this former sandpit is now a 55-acre lake, the largest in the U.S. made specifically for divers. Its depths range from 20 to 61 feet, so there’s more than enough room for seventy-plus “wrecks,” including fire trucks and remnants of rides from the now-defunct AstroWorld. Plus, there’s swimming, kayaking, and paddleboarding for those who prefer to keep their heads above water. 330 N. Dixie Dr, 979-529-9174, mammothlake​waterpark.com

Pine trees gaze upon their own reflections in the sparkling springs that burble up at this former limestone quarry north of town. Divers, who get first dibs here, can slink like eels around sunken boats and platforms some thirty feet below, while newbies and the less-than-eel-like can take lessons. Mere swimmers and sunbathers must wait their turn for a dip in the crisp waters, which are so blue you’d almost suspect sizable infusions of artificial coloring. 649 Pinedale Rd, 936-438-8888, bluelagoonscuba.net

The softshell turtles, silvery tetra fish, and bewhiskered catfish will wonder why it took you so long to figure out what they already know: that this beloved swimming hole is also one of the finest freshwater diving spots. The balmy waters from the San Solomon Springs hover around 74 degrees—an inviting temperature for the scuba students  exploring the pool’s deep end. Four miles southwest of Balmorhea, on Texas Hwy 17; 432-375-2370; tpwd.texas.gov

First, you boat a hundred miles off the Texas Coast. Then, if conditions are just right, over the side you go, down to the reef sixty feet below. Twenty-one species of coral cover three salt domes, and if you venture there seven to ten days after August’s full moon, you might witness the annual coral spawning, which has been described as an “upward rain of new life.” Charters from Galveston, Freeport, Sabine Pass, and Surfside; 409-621-5151; flowergarden.noaa.gov 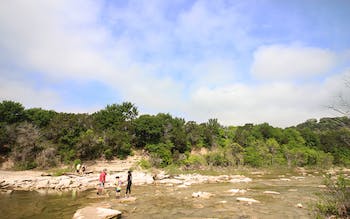