texasmonthly.com: A Bum Steer Award will make sure that the recipient will not go unnoticed. What is the future of the Bum Steer Award? Can you imagine people or companies eventually nominating themselves?

Paul Burka: Bum Steers are supposed to be a commentary on the human condition: as Shakespeare observed in A Midsummer Night’s Dream, “Lord, what fools these mortals be!” If someone deliberately sets out to make a fool of himself in order to get publicity, we have a rule that they cannot be a Bum Steer. But then somebody like John Winter Smith of Dallas decides he is going to visit every Starbucks outlet in America, and you realize that rules are made to be broken. He’s a Bum Steer this year. Sometimes I wonder if the joke is on us in Bum Steers Bookshelf and Bum Steers Gift Guide: Are people producing these crazy things so that they will reap increased sales from the publicity?

texasmonthly.com: What really makes a Bum Steer cover? Must it be a widely known incident or person, or can a dark horse slip in onto the cover?

PB: A well-known person whose foibles are also well known makes the best Bum Steers cover. Anna Nicole Smith is perfect this year. She’s been in the news, she’s been on TV, and she’s always outrageous. Come to think of it, she practically auditions for Bum Steers. We have also had success with just putting a comic steer on the cover; the story itself is so well known that it will attract readers either way.

texasmonthly.com: Are some Bum Steers very obvious subjects year after year, like George W. Bush and the Aggies?

PB: Oh, definitely. In January 2000, we had our own Bum Steer quiz about foreign leaders after Governor Bush, who was then running for president, had botched four questions on the subject during a TV interview. This year we have an entire box devoted to the Bush family. An occasional reader writes an angry letter, but the president, who relishes taking a good dig at somebody himself, doesn’t seem to mind. The Aggies are a bit thinner-skinned and have generated more complaints, but I also think we sometimes went overboard with Aggie Bum Steers in the past. We’ll never do that again. As for those seven Aggie-related items this year, they’re just good clean fun. We love the Aggies. Honest we do.

texasmonthly.com: Have you thought about expanding the Bum Steers to include more categories?

PB: My Bum Steers cohort, Annie Dingus, and I have talked about organizing Bum Steers as a newspaper, with a sports page and a crime page and a local page, but we think that the concentration of similar items would reduce the humorous impact.

texasmonthly.com: Do you have any personal favorites this year?

PB: I always like doing the pun headline—using puns on whatever the subject of the item is, such as fish, nuts, and this year’s subject, cheese, to tell a story. We worked 27 kinds of cheeses into the headlines this year. 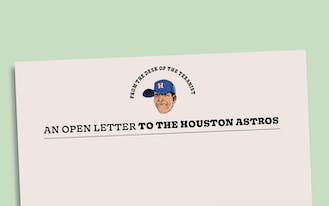