Gun sales have spiked across Texas, something gun store owners ascribe to people’s fears that President Barack Obama will be reelected and go after gun rights during his second term.

Anna M. Tinsley wrote a 1,300-word story about the phenomenon in Sunday’s Fort Worth Star-Telegram, visiting Cheaper Than Dirt, a local gun store that had a record month in sales during February.

“Look who the Republicans are trying to put against Obama,” said DeWayne Irwin, the store’s owner. “[P]eople are getting scared. People are terrified he’s going to get re-elected and then he won’t care about getting votes next time. He’ll just pass whatever legislation he wants.”

Last year, FBI background checks for potential gun buyers, hit an all time high, at 16.3 million, up from 8.9 million in 2005. A full 1.2 million of those checks in 2011 were conducted on Texas buyers. Only Kentucky had more checks, with 2.3 million.

Maybe the bump could be attributed to looming end of the world, which the Mayans predict for December and shows like National Geographic’s Doomsday Preppers are capitalizing on. Or perhaps the bump in sales comes from gun companies that are marketing pink guns to women. But Irwin said he believes politics in the driving force. He told Tinsley that a prominent businessman recently dropped $25,000 on ammo and gun accessories after saying that “Republicans don’t have a prayer against Obama.”

Of course, during his current term in office, President Obama has actually expanded the reach of firearms, signing laws that allow guns to be brought into national parks and into checked baggage on Amtrak. As the Chicago Tribune‘s Steve Chapman noted in a 2010 column, Obama has “approved changes that should gladden the hearts of gun-rights supporters, a group that includes me,” Chapman wrote.

Obama, who everyone expected to push to revive the assault weapons ban that President Bill Clinton signed into law in 1994 and expired ten years later, has made no move to do so, though Attorney General Eric Holder has spoken in favor of a new ban.

In December, Timothy Egan devoted his New York Times column to Obama’s stance on guns, and found a reason for Obama’s hands-off approach:

The plain and simple truth is that Democrats learned from the last gun law episode, when President Clinton led Congress to ban certain kinds of assault weapons in 1994, not to touch this issue. And ever since then, after many Western and rural Democrats were voted out, they have been silent. Your typical Democrat from the West, now, is as likely to show off his gun collection as any preening Republican.

Regardless, the subject raises the hackles of both gun rights advocates and their opponents. In fact, the comments section on the Star-Telegram story got so heated, the paper turned them off. “Those who continue to violate our standards of decency will be banned,” a disclaimer on the story reads. 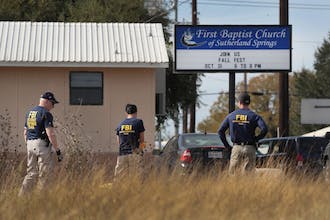