The U.S. government expressed its disapproval with BP in another way Wednesday morning, announcing that the company is temporarily suspended from receiving new federal contracts.

In a statement, the Environmental Protection Agency explained that the agency was “taking this action due to BP’s lack of business integrity as demonstrated by the company’s conduct with regard to the Deepwater Horizon blowout, explosion, oil spill, and response, as reflected by the filing of a criminal information.” Current contracts are not impacted. The agency called such a suspension “standard practice” and indicated it would be in place until “until the company can provide sufficient evidence to EPA demonstrating that it meets federal business standards.”

On November 15, BP pleaded guilty to 14 federal criminal charges connected to the spill and agreed to pay a $4.5 billion settlement in connection with those charges. When BP agreed to plea guilty, the company noted in a statement that the federal government can “debar” companies convicted of certain criminal offenses from receiving government contracts, but that the federal government had not indicated to BP that this would happen.

So, what does BP stand to lose? Bloomberg reported that there’s at least one immediate consequence for the company: “The Interior Department also said it won’t award BP any leases in a Gulf auction today because the company has been barred from winning federal contracts. BP would be eligible for the leases when the government ends the temporary contract suspension, the agency said.”

Then there is the issue of BP’s supply contracts with the U.S. Department of Defense. “Debarment could lead to the cancellation of lucrative fuel contracts that BP gets from the Department of Defense,” Guy Chazan pointed out at the Financial Times. Just how big are those contracts? Bloomberg’s Danielle Ivory has the details:

The company in fiscal year 2011 was the Defense Department’s biggest fuel supplier with awards valued at about $1.35 billion. Its contracts with the military surged 33 percent from $1.02 billion in the previous year, according to data compiled by Bloomberg.

The company received 49 percent more in defense contracts in 2011 than the No. 2 fuel supplier, San Antonio-based Valero Energy Corp. (VLO) BP won a $782 million Pentagon award for fuel in May even as it continued to face legal challenges. Full fiscal 2012 figures aren’t yet available.

Scott Amey, general counsel for the Washington-based Project on Government Oversight, called the suspension “a win for holding all companies, big or small, accountable to the federal government and taxpayers,” before going on to wonder how long BP could be kept “in timeout” because of the sheer size of the company’s defense contracts. “Let’s see how long the suspension lasts or if the military grants any waivers,” he said.

Lawyers for the company appeared in court in New Orleans on Wednesday to deal with procedural issues in the criminal case. BP made no immediate comment from London on the development, Reuters reported.

Much more money is on the line than the $4.5 billion criminal settlement. As the Houston Chronicle‘s Harry R. Weber noted, “that settlement figure could pale in comparison to what BP still has yet to resolve–civil fines over the amount of oil that spilled. BP either will reach a deal with the Justice Department or go to trial over civil citations. In either case, BP could be on the hook for up to $21 billion in Clean Water Act fines alone.” 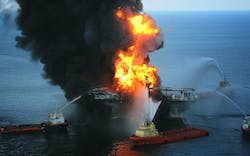 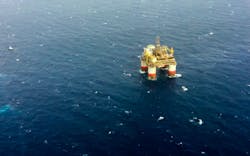 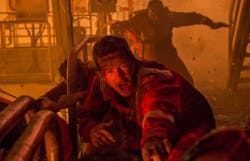 Truth and Fiction on the Horizon