Shortly after I took the position of barbecue editor at Texas Monthly, I had a conversation with my doctor about cholesterol. He gave me a ranked chart of items to avoid to keep my LDL (low-density lipoprotein, a.k.a. the bad cholesterol) levels down. Brisket took the first position, and pork spare ribs were second. For comparison, bacon barely cracked the top ten. I took one look at the chart and asked politely and realistically for the right drugs. I was going to have to eat all the barbecue regardless of how unhealthy it was, and I’d rather not know just how much worse the pulled pork was for me than the smoked turkey. Now, at some Texas barbecue locations, we don’t have that choice.

As of last week (May 7), the FDA requires that any restaurant chain with twenty or more locations post the nutrition information for all of its menu items. That means chains such as Dickey’s Barbecue Pit and Rudy’s Bar-B-Que now must post that information on the menus hanging above their counters. The full requirements from the FDA are more specific as to the information that needs to be included:

The two major Texas barbecue chains don’t seem to have bothered with the directive. I stopped at three Dickey’s locations in Dallas as well as the Rudy’s Bar-B-Que in Allen to see their newly unveiled calorie counts next to the menu items, but they weren’t there yet. The original Dickey’s had a few confusing notations showing the wild variation in calories that can be had in a generic barbecue platter. A Dickey’s manager at another location said, “If you’re counting calories, you’re in the wrong place.” At Rudy’s, they directed me to their website for the information. It’s all there. I’d planned ahead and made some notes before I arrived to determine my order.

Left: The lower-cal "Option A" platter at Rudy's.

Top: The "Option B" fatter platter at Rudy's.

At Rudy’s, I chose the lowest-calorie and highest-calorie two-meat combinations for lunch. Everything here is a la carte, so I ordered in quarter-pound increments with two sides for each platter. Not surprisingly, there was a big disparity between the fat and calories in the smoked turkey and fatty (they call it “moist”) brisket. But, as someone who eats barbecue for a living, I was struck by just how wide the gap was between platters A & B. Option A featured smoked pork loin along with the turkey. Corn on the cob and pinto beans joined in as the healthiest sides. (Okay, you could make a case for the three-bean salad, but then you’d have to eat three-bean salad.) In total, that plate had 461 calories and seven grams of fat. Not bad for a hearty barbecue meal.

The jalapeño sausage paired with moist brisket tipped the scales the other direction for Option B. With apologies to the fans of the cream corn, it’s by far the heaviest side. Potato salad wasn’t much better. All together, that meal came in at 1,271 calories and 88 grams of fat. I know. I get it. Barbecue isn’t the healthiest of dining options, and that’s not exactly breaking news. But as I sat eating about half of both meals (well, I didn’t order it just to take photos), it didn’t dawn on me that I could have eaten Option A, downed a Big Mac with fries afterward, and still been better off than with Option B.

Then again, I love sausage and fatty brisket, and I won’t stop eating either of them anytime soon. If anything, these nutrition facts have made me wonder how it is that I’m only as fat as I am. That Dickey’s manager was right about most barbecue fans. They’re not counting calories, but if I’d known my mid-afternoon snack of a Dickey’s chopped beef sandwich was 575 calories (which includes the seventy calories of sauce, pickles, onions, and pickled jalapeños) and 31 grams of fat, I might have eaten less of it. Then again, if these nutrition facts are on your mind for your next barbecue visit, maybe it’ll be a nudge to make sure you’re eating the good stuff. 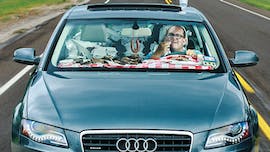 Confessions of a Fat Bastard