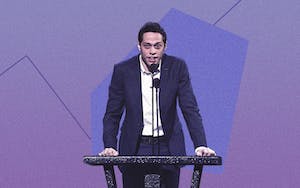 Lincoln had Douglas. Kennedy had Nixon. Ann Richards had Clayton Williams. Every truly exceptional politician has had a foil, someone voters could contrast them with, their appeal sharpened against the whetstone of its opposite. And while Texas congressman Dan Crenshaw has attempted to position himself as nemesis to Nancy Pelosi, Alexandria Ocasio-Cortez, and other high-profile Dems, there’s really only one person who can lay claim to having honed Crenshaw’s career: Pete Davidson.

As Crenshaw himself has acknowledged, Davidson’s blithe joking about Crenshaw’s eyepatch during a Saturday Night Live segment before the midterms “probably helped” him win his seat in 2018—along with giving him free national exposure after the bit went viral. Crenshaw’s subsequent appearance on the show, where he accepted Davidson’s apology (and landed a few jabs of his own), boosted the soon-to-be-freshman congressman’s national profile overnight, landing him a steady stream of TV gigs since. It’s little wonder that, two years after they buried the hatchet, Crenshaw still wants to remind voters that he is the only candidate to have reached across the aisle to that dopey stoner kid on the comedy show. And now, just in time for Crenshaw’s reelection bid, that rivalry may be reignited.

In Davidson’s just-released Netflix special, Alive From New York, the comedian jokes about how he was “forced to apologize” to Crenshaw after receiving death threats, all but rescinding that apology while downplaying the idea that it might have helped Crenshaw out. “The only thing I don’t like is people are, like, ‘It’s your fault that guy won,’ and that’s not true,” Davidson jokes. “I think, like, most of the votes were in, and that guy is a Republican with an eyepatch in Texas. So it was a lock before it even started … In Texas, I’m pretty sure they only have pictures, that’s how they vote.” (An unfair dig; we also have NRA endorsements.)

“The only thing I did do, which I am guilty of and I apologize for, is I did make that guy famous and a household name for no reason,” Davidson adds.

Crenshaw has yet to comment on Davidson’s reversal, even as the bit’s begun making the national news rounds—although to be fair, it must be difficult to craft an appropriately statesmanlike rejoinder to a Pete Davidson stand-up set. You gotta save those big, platform issues for the campaign trail.

The Miseducation of Robert Morrow

If politicians are defined by their opponents, then Robert Morrow stands out as the clear alternative to a pleasant afternoon. The mercurial former chairman of the Travis County GOP has been a familiar presence on the fringes of local politics, open-mic Q&As, and journalists’ Twitter mentions for several years now, although it’s been a while since he held an actual government role. That could all change, however, now that Morrow is on the ballot for the Texas State Board of Education.

As the Texas Tribune reported this week, Morrow is running for one of eight vacant seats on the board tasked with deciding the curriculum for millions of students, challenging two other Republicans in District 5. Morrow says he wants to cut public education spending, while blocking state vouchers for private education and opposing privately managed charter schools. Still, it’s not all about the kids. He tells the Tribune that one of his main objectives will be ensuring that his fervent belief that “Lyndon Johnson murdered John F. Kennedy” (a theory he’s shared repeatedly with anyone who’s been dumb enough to write about the Kennedy assassination) is listed as fact in every state-approved textbook. He is also running primarily “to impeach, convict, and remove Donald Trump, and throw his sorry ass in prison”—an issue on which the Texas State Board of Education has remained largely neutral.

Morrow’s anti-Trump agenda, which hinges on his oft-expressed conviction that the president is a “child rapist,” has long been one of his political passions, rivaled only by his virulent hatred of the Clintons, his tendency toward racist, misogynistic, transphobic, and just plain vulgar language, his love of wearing a jester’s hat, and his oft-professed love of women’s breasts. But will it be enough to sway voters? Currently no one—not even Morrow—believes he has more than the slimmest chance at winning. Any votes he gets will, as in the Travis County GOP race he won, likely come down to the ill-informed just picking a name at random, possibly because they think it’s the guy from Northern Exposure. “Anybody worried about me being in the SBOE, well it’s less than 1 out of 1,000,” Morrow tells the Tribune, and even that sounds optimistic. Still, his campaign is briefly forcing everyone to pay attention to Robert Morrow, which has always been his platform.

If only there were a similar sense of purpose to Michael Bloomberg’s presidential bid, which more and more seems like some sort of Brewster’s Millions-esque ruse to burn as much cash as fast as possible while wasting everyone’s time. Bloomberg, with the money he’s spent on Facebook ads alone, probably could have bought his own chain of islands and declared himself president of those. But instead he continues to limp along in the polls both here and nationwide, despite earning the coveted political endorsements of, uh, Tim Duncan. Still, he’s soldiering on, determined to share his political message that Michael Bloomberg is disgustingly, almost nauseatingly rich.

To that end, he recently hired a guy who’s well known for turning a little bit of innovation and a whole lot of unchecked hubris into full-blown dystopian visions: Tim Nolan, who transformed homeless people into Wi-Fi hot spots during SXSW 2012 by strapping them with routers, and who is currently a “creative lead” on Bloomberg’s campaign. The Austin-based marketing stunt sparked an outpouring of horrified reactions from journalists who found it soulless and insulting, even by “SXSW activation” standards—or, as Nolan put it on his website, it earned him “500 million media impressions.” It’s a philosophy of “there’s no such thing as bad publicity” that, frankly, may as well be Bloomberg’s campaign slogan.

Public opinion toward the stunt has since softened slightly, abetted by reports that those homeless participants—who were at least paid for their services—said they didn’t feel exploited, and ameliorated by the slow degradation of the ability to feel things over these past eight years. Still, suffice it to say it’s a rather dubious association for Bloomberg, whose treatment of the homeless while he was New York’s mayor was spotty, to put it charitably. If Bloomberg really wanted to poach crass marketing ideas from SXSW, couldn’t he have just campaigned inside that giant Doritos machine?

In times such as these, when we cannot trust that our politicians have interests beyond their own, at least there are still true public servants like Dr. Ronny Jackson. Sure, the former White House physician, who’s currently running for Congress in Texas’s thirteenth district, has been accused of making some questionable choices in the past. There were those allegations of him bullying his staff, doling out meds to political influencers, and drinking on the job—claims he calls “complete garbage”—that forced the White House to withdraw Jackson from consideration for Secretary of Veterans Affairs. There was also the time that Jackson once proclaimed Donald Trump to be in “excellent” mental and physical health, stopping just short of commenting on his enviably lustrous hair.

But while these hint that Jackson may have taken oaths beyond the Hippocratic, a recent New York Times article chronicling Jackson’s at-times tragicomic congressional campaign reveals some of the lengths he went to in service of his country. For instance, he says, he also spent time making Trump’s ice cream “less accessible” and “putting cauliflower into mashed potatoes,” like one would for a chubby and obstinate child. It’s an act of deception, yes, but one undertaken for the greater good, ensuring that a man incapable of making smart decisions about his own health could live on to make them for everybody else. Unfortunately, that ruse doesn’t seem to have endeared him to Trump: the president and his consorts have so far declined to endorse Jackson’s campaign or intervene in any way. If only Jackson’s opponent were a plate of vegetables; that would at least give Trump something to vote against.