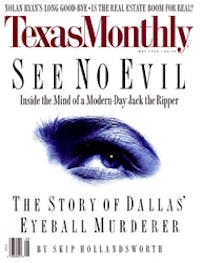 This is hard to believe. Governor Ann Richards wants to abolish the agency that has done more to advance her favorite cause of open and responsive government and that has created less public mischief than any other branch of state government. Her intended victim is the Sunset Advisory Commission, whose seemingly bland mission is to review all state agencies and recommend improvements in the way they operate. This is not normally the stuff that incites political passions; the history of government, state and federal, is replete with examples of toothless efficiency committees whose recommendations were ignored. What makes the Texas sunset process different is that it is impossible to ignore and it has the teeth of a tyrannosaur. The authority, one fears, is precisely why Richards and other entrenched powers in the Capitol—Lieutenant Governor Bob Bullock, Speaker Pete Laney, the big state agencies, the permanent Austin lobby, senior legislators with clout—are determined to get rid of it. The battle over sunset is not a battle between Democrats and Republicans or liberals and conservatives. It is a battle between the oldest of political adversaries: Ins and Outs.

Sunset is the only area of legislative politics in which the Outs are guaranteed the opportunity for a fair fight. Suppose, for example, you visit your grandfather in a nursing home one day and discover an employee of the home applying pesticides in his room. The smell is awful, and the amount seems excessive. You complain to the management and are told that nursing homes are exempt from state pesticide laws. They (like hospitals, schools, and day care centers) may use their own employees, who do not have to meet state licensing and training standards. You take your complaint to your state legislator, who agrees to try to change the law. Don’t hold your breath. Your proposal costs nursing homes money. Their lobbyists will oppose it. Your idea is DOA in the House public health committee, which traditionally is dominated by doctors, hospitals, and nursing homes. In the absences of a major public outcry, you haven’t got a chance.

The Texas sunset law changes everything. Agencies under sunset review—and every agency is scheduled to come under scrutiny at some time during a twelve-year cycle—cease to exist unless the Legislature takes specific action to reauthorize them. This year the Alcoholic Beverage Commission, the Public Utility Commission, and the Texas Department of Commerce are among the group of agencies that face extinction on August 31 unless they are reestablished by law. Few would mourn the passing of this particular trio, but in practice the Legislature almost always renews an agency’s life. The real battle is not over life or death but over changes in an agency’s structure and mission. Loopholes like the nursing homes’ pesticide exemption cannot escape examination.

Sunset legislation, therefore, is like an express train. It can’t be sidetracked or derailed in committee; it can’t be delayed to death; it can’t be voted down or vetoed without throwing the government into chaos. (As bad as the Alcoholic Beverage Commission is, not having any regulation would be worse.) A sunset bill is certain to be debated and voted on, fairly and openly. During that debate, legislators can offer amendments that must be debated and voted on, fairly and openly. Sunset opens up the legislative process to ideas that otherwise might never see the light of day.

A case in point: The nursing homes’ pesticide exemption is history. During the review of an obscure agency called the Structural Pest Control Board in 1991, the Sunset Advisory Commission decided that the exemption could not be justified. The Legislature changed the law so that only nursing homes but also schools, hospitals, and day care centers now have to use licensed, trained applicators. Other sunset revisions that year forced a recalcitrant state highway department to establish a process to deal with environmental issues, replaced a majority of funeral directors with a majority of ordinary citizens on the board that hears consumer complaints about funeral services, and strengthened the state’s weak “lemon law,” providing relief for owners of defective automobiles. Even the haughty State Bar had to change its grievance procedures to be more responsive to complaints about lawyers.

So what’s the problem? If the sunset process is so good, why does it have so many enemies in high places?

Here are the reasons often cited by sunset’s critics—and why they’re wrong:

None of these reasons explain why the sunset process itself is in danger of being sunsetted. The real reason is power. The governor has less to fear from occasional legislative oversight of executive agencies than from formal sunset review. She cannot be pleased that two agencies in which her close friends play leading roles, the State Board of Insurance and the Department of Commerce, have been strongly criticized as a result of the current review process. The lieutenant governor and Speaker have no direct control over the Sunset Advisory Commission; if oversight responsibility belonged to the Legislature, their control would be near-absolute. Committee chairmen, currently unable to kill sunset-related proposals, would reassert their authority. The bureaucrats have everything to gain and nothing to lose from the end of sunset. And, of course, no one would be happier to see sunset go than the entrenched interest groups and their lobbyists.

Of all the opponents of sunset, the one whose opposition is hardest to fathom is Ann Richards. Sunset reforms have increased her power, boosted diversity in hiring, encouraged minority business enterprises, established ethical standards—all benchmarks of her philosophy. Sunset has served the interests of ordinary people.

But perhaps that’s the problem. The governor—any governor—is no longer an ordinary person. It is so easy to fall into the trap of believing that you are different, that you are there to do good, that oversight and review are meant for the bad guys. It is so easy to forget what the authors of the U.S. Constitution understood so well: Good people are important to good government, but even more important is good process.