WHAT 4,000 MILES OF UNBUILT ROAD SAYS ABOUT PERRY

The Los Angeles Times recaps Governor Perry’s failed attempt to fund and build the Trans-Texas Corridor. But instead of focusing specifically on the project’s association with crony capitalism, emininent domain and border issues (as many past stories, including this one from Politico, have), the Times‘ Paul West suggested that Perry’s inability to make the project happen was due to management flaws that have also shown themselves in the campaign: “[T]he sometimes lethal combination of inattention to detail and an insularity that blunts opposing views until it’s too late.”

After several weeks of Perry family profiles in its ongoing Sunday series, the Dallas Morning News traced the evolution of the governor’s political philosophy in a long, no-punches-pulled piece by senior political writer Wayne Slater. As everybody knows, Perry was first elected to the legislature as a Democrat, but later switched over to the Republican Party. As everybody also knows, he and plenty other Republican Texans became more and more conservative in their idealogical beliefs, but Slater explained how remarkable the governor’s shift has been. When Perry first took office, he proselytized for state and federal education funding and “signed a hate crimes bill that included gays as a protected class.” Now he courts the Evangelical vote and is a Tea Party darling.

While Rep. Garnet Coleman (D-Houston) described Perry as “an opportunist,” Rep. Charlie Geren (R-Fort Worth) said Perry’s transformation has made the governor “a much more patient person” who’s gotten better at leading.

TWO OUT OF TWO PERRYS AGREE: OBAMA’S A SOCIALIST

“Obama’s socialist policies are bankrupting America. We must stop him now,” Perry says in one of his latest campaign ads. It’s a theme he hit again while talking to Fox News’ Bill O’Reilly on Friday. Then, on Saturday, the campaign brought out the big gun: former nurse and physician’s daughter Anita Perry.

According to Fox News’ Lexi Stemple, Anita Perry’s “strong feelings about health care reform are why she wanted her husband to run for president.”

“I don’t like socialized medicine and that’s the path we’re going,” Anita Perry told Stemple. “We have the greatest health care system. Why would we want to change it?”

WHAT GOES UP MUST COME DOWN

The latest presidential primary polls have brought us a new frontrunner: former Speaker of the House Newt Gingrich, who according to a new national Reuters/Ipsos poll now leads Mitt Romney, 24 percent to 22 percent. But in a roundup of the Sunday morning talk shows, Stewart Powell of the Houston Chronicle‘s Perry Presidential blog found a lot of people stressing just how fluid—and still early—the campaign is, especially considering that nearly every frontrunner, including Perry himself, has also lost that spot.

“I do not rule out a possible comeback by Rick Perry simply because he has got a lot of money to spend,” Washington Post columnist Eugene Robinson said on Meet the Press.

NEWT IS A WASHINGTON INSIDER

Perry broke out yet another ad on Saturday, one which hammers home his promise to balance the federal budget and cut Congressional pay in half. In the spot, photos of President Barack Obama with Nancy Pelosi and Harry Reid flash across the screen, but the real shot is at a Washington fixture we don’t see in the commercial.
“Replacing one Washington insider with another won’t change a thing,” he declares, an obvious dig at new frontrunner Newt Gingrinch. 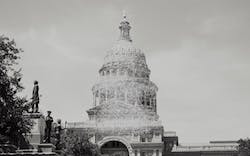 Who Said What At The Texas Tribune Festival