In 1953, Dale Crawford received a parking ticket in downtown Houston for an expired meter. Nearly sixty years later, he repaid his debt to the city, handing over a dollar to Mayor Annise Parker at a press conference after the city council meeting on Wednesday.

“I am going to pay the mayor – in cold hard cash,” Crawford said.

Adjusted for inflation, Dale Crawford would owe $8.47 in today’s dollars for his $1 ticket, according to the Bureau of Labor Statistics’ inflation calculator. And that’s not even factoring in late fees and interest, which Parker kindly dropped. A ticket for the same offense today would be $35, Molly Hennessy-Fiske of the Los Angeles Times reported.

“We are so impressed with him coming forward that we have waived penalties and interest,” Parker said at the press conference, smiling. “No, it will not make any dent in the city’s budget problems, but I hope his example is one other Houstonians will follow.”

At the presser, Crawford explained that he received the ticket downtown on the day he went to be inducted to the Army, the Houston Chronicle‘s Zain Shauk reported. Crawford had parked his 1946 Nash on the street near 1200 Milam, and it was ticketed when his father was late picking it up. He didn’t know of the traffic citation until his mother’s death in 1995, when he found it in her belongings.

“It’s only a dollar and it’s almost 60 years old, but it’s still a debt and I feel debts ought to be paid,” Crawford said, officially making every person who has ever shirked paying a parking ticket look like the worst citizen ever. 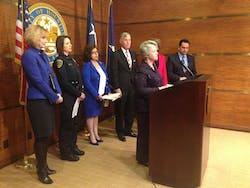