Every morning at the National Butterfly Center, in Mission, a groundskeeper sets out across the one-hundred-acre property to clear fallen branches from the trails and hang up butterfly bait. One such morning in October 2012, near the peak of the fall butterfly season, she spotted a suspicious-looking man skulking around a grove of hackberry trees. She called Marianna Wright, the center’s executive director, who called the Mission Police Department, which called the Border Patrol, which dispatched agents to apprehend the man.

The trespasser did not go quietly. “The guy’s like, ‘I’m an American! You can’t do this to me!’” Wright recalled. “The Border Patrol was like, ‘Sir, you’re sneaking around in a protected area. You didn’t identify yourself, you didn’t come here for a legitimate purpose. We could have you at Guantánamo for twenty-four hours before we even ask you whether you’re an American citizen.’”

The intruder wasn’t an illegal immigrant, or a drug smuggler, or a would-be terrorist. He was a poacher, armed with a net and a backpack full of jars. His target? The zebra heliconian, a black-and-yellow butterfly with a two-inch wingspan. Although the man was eventually released with a warning, Mission, a predominantly Hispanic town of 80,000 people just west of McAllen on the Mexican border, takes butterfly poaching seriously. Last year, the city council unanimously passed an ordinance prohibiting the capture or killing of butterflies on public property.

The ordinance, believed to be the first of its kind in the country, is part of Mission’s ongoing attempt to brand itself as the butterfly capital of America. The city’s website sports an image of a queen butterfly, the city’s official butterfly, next to the city seal, and one of the town’s water towers is emblazoned not with the mascot of the high school football team but with a Mexican bluewing. Early next year a series of five-foot-high fiberglass butterfly sculptures will be installed along Conway Avenue, the city’s main thoroughfare.

“We have people who come all the way from South America to see one butterfly,” said Mayor Norberto Salinas, a seventeen-year incumbent whose statue guards the entrance to city hall. Salinas admitted to never paying much attention to his city’s lepidoptera before 2002, when the New Jersey–based North American Butterfly Association acquired a former onion farm abutting the Rio Grande and established the National Butterfly Center. “You’d be surprised how these tourists feel. They’re very close to butterflies. They know almost all of them. And now that we have the Butterfly Center, we want to take care of it.” Deputy city manager Aida Lerma nodded in agreement: “We want this to be a safe haven for butterflies.”

The city, and the entire Rio Grande Valley, needs all the ecotourism dollars it can get. The McAllen-Edinburg-Mission metropolitan area is the second-poorest in the country. Like many border cities, Mission is dotted with colonias—unincorporated, ramshackle settlements that often lack paved roads, running water, or sewers. And although the region has a crime rate well below the national average, the Mexican drug wars and the surge in illegal immigrants last summer—not to mention the heavy law enforcement presence that can make South Texas feel like an occupied country—have fueled perceptions of the Valley as a dangerous no-man’s-land, hampering efforts by cities like Mission to promote their ecological riches.

The Rio Grande Valley has long been a mecca for naturalists; a 2011 Texas A&M study estimated that ecotourism has contributed about $300 million a year to the local economy. Birdwatching remains the biggest draw, but butterflying is quickly catching up, in part because of the hobby’s recent shift from a focus on catching butterflies and pinning them to a board—the traditional method—to photographing them or simply studying them through binoculars. A similar transformation helped popularize birding in the thirties, as people began gazing at birds rather than shooting them.

Around three hundred species of butterfly can be found in the Valley, thanks to its location within both the northernmost range of many Mexican butterflies and the southernmost range of many American butterflies. Serious lepidopterists, like Mike Rickard, have been making pilgrimages to the Valley for decades. Rickard caught the collecting bug while growing up in Houston, developing a lifelong passion that has bordered on obsession. “Collecting butterflies probably cost me my first marriage,” he said. “Although my wife was also a pretty serious butterflier.” In 2008, after he and his second wife retired, they left Houston for Mission, where they relandscaped their yard with butterfly host plants.

A big reason the Rickards chose to retire to Mission was the National Butterfly Center, an outdoor wildlife refuge that features only native plants and the butterflies they attract. The center’s marquee event is the annual Texas Butterfly Festival, which will be held this year from October 31 to November 3, at the zenith of butterfly season—when, along with countless others, Monarch butterflies make their famous migration through Texas and into central Mexico. “You have to walk and talk like this so you don’t suck butterflies into your mouth,” said Wright, the center’s executive director, putting her hand in front of her mouth as if to stifle a cough. “They’re landing on you, you’re walking through clouds of them. The bushes will be pulsing like they’re alive. It’s surreal.”

On a recent Sunday morning, as Wright was giving me a tour of the NBC, the pastoral quiet was shattered by a volley of gunshots. Wincing slightly, she explained that a target practice range had been set up on an adjacent property for the use of the law enforcement agencies that patrol the border—DPS, Border Patrol, Texas Rangers, city and county police departments, and the U.S. Fish and Wildlife Service.

Lately, the border wars have proved to be a force even more menacing than net-wielding poachers to Mission’s burgeoning butterfly-tourism industry. In the summer of 2014, in response to a surge of unaccompanied Central American children crossing the border, Governor Rick Perry deployed the Texas National Guard to the Rio Grande Valley. One unit was stationed atop an earthen levee in the middle of the NBC’s property, where guardsmen with automatic rifles and full body armor stood watch day after day in the boiling sun. Soon Wright began fielding calls from butterfliers around the country concerned by what they were seeing on the news. “We had people calling us—‘Are y’all okay? Are you safe?’”

Despite her assurance that it was business as usual, attendance at last year’s festival fell by 20 percent. “I contacted some people who have come every year but didn’t come last year and asked why,” Wright said. “The answer was, because of the things they were seeing on the evening news—the headlines about the invasion of America.”

For longtime Valley residents like Wright, who grew up in McAllen, the contrast between their day-to-day life and what they see on TV is stark. “Life in the Valley is not as sensational as those who would like to profit from these stories would have you believe,” she insisted. “The idea that we have a high crime rate down here is a joke. Our life is boring!” In her three years working at the center, Wright has never encountered an illegal immigrant, although about once a month the park’s wildlife cameras catch one crossing through at night. Since nothing’s ever been stolen, she follows a live-and-let-live policy.

Despite occasional tensions, the NBC has managed to maintain a wary concordat with the law enforcement agencies patrolling the border. Last fall, the center hosted a fajita dinner for the National Guard troops stationed nearby. “There was a lot of hostility in the area. Some people threw rocks at them,” Wright said. “We felt like, let’s show them our South Texas hospitality and welcome them. They didn’t choose to come down here. They were deployed.” During the butterfly festival not long after, a group of curve-winged metalmarks were spotted near a DPS encampment about a mile north of the Rio Grande. As word spread of the sighting and lepidopterists began to descend on the area, several DPS officers found themselves pressed into the unexpected role of wildlife guide, directing tourists to the butterflies.

Looming over all of these issues is the specter of the border wall. A few sections of the wall have already been erected in the Mission area; completing it, as some Republican politicians advocate, would mean building a concrete barrier through the park, cutting off visitor access to as much as two thirds of the land. “That would create a hideous eyesore and a palpable feeling of menace,” said North American Butterfly Association president Jeffrey Glassberg. “If a wall were to be built, the National Butterfly Center would cease to be operated.”

NABA’s somewhat grandiose motto, “If We Can Save Butterflies, We Can Save Ourselves,” refers to the fact that butterflies, because of their short lifespan, often provide early warning signals about disruptions in their surroundings, whether those disruptions are natural or man-made. “Butterflies, unlike birds or mammals, respond almost instantaneously to changes in the environment,” Glassberg said. “When they fly changes, where they fly changes. Butterflies show us a lot about what’s going on in the environment. And right now, it isn’t good.” 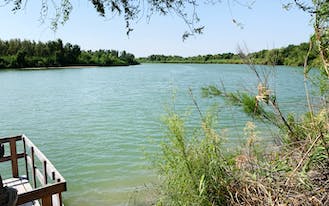 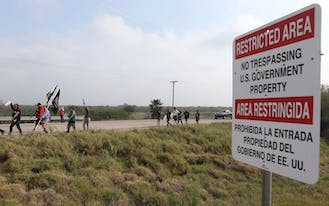 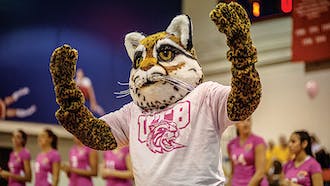 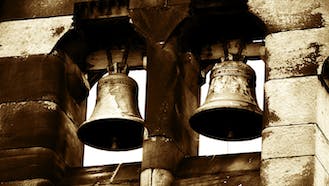 Mission, Texas Has Exempted Churches From Its Noise Ordinance