Editor’s note: Due to inclement weather, Levitation has been canceled.

Before he heads off on his first European tour, Houston-born electronic composer and looping extraordinaire Roger Sellers—under the sobriquet Bayonne—is bidding a brief adieu to Austin at the Levitation festival this weekend. The past year has been busy for the Austin-based musician, who after signing to Mom & Pop Records last year changed his stage name to Bayonne, re-released his album Primitives, and embarked on an intense touring schedule.

Even though he’s been making music in Austin for eight years, the name change seems to have triggered media attention. Rolling Stone recently featured him as one of the “10 Artists To Watch,” NPR included his single “Spectrolite” in “Heavy Rotation,” and Jay Z-owned streaming service TIDAL has spotlighted him. Sellers’s recent success is a mystery to him, but it was about time that the rest of the world started catching on.

While on the road back to Austin this week, Sellers talked to Texas Monthly about finding success in Austin’s music scene, life after signing to Mom & Pop Records, and what we can expect next.

Tess Cagle: How has tour been going so far?

Roger Sellers: We’re in Indiana, kind of heading back toward Austin. It’s been great. I mean, I was on a headlining tour and then jumped on with [Brooklyn band] Small Black halfway.

TC: How is touring different this time around? You headed out in January, right?

RS: Yeah, for this release. That was crazy. That was the East Coast and northeast. It was really rainy and icy and snowy and there were blizzards. Then, I had a month off and then went to the West Coast and did SXSW and all that, and now we’re kind of Midwest-ing it.

TC: And you’re not done. After Levitation you still have a couple months left to go.

RS: Yeah, pretty much. A lot of it is like fly-outs and stuff, though. I have festivals and Europe and stuff in May and June. Really busy year, so far. It’s been crazy.

TC: You started out performing in San Marcos. What was it like making that move to Austin and getting involved in that scene?

RS: I went to school in San Marcos, and that’s where I got started learning how to perform live, I guess. Or at least where I started performing live in front of audiences. In that time I started playing in Austin as well, so it was a pretty easy transition. I feel like I kind of had my foot in the door in Austin, at least a little bit. So it wasn’t a completely new environment or new community, I already had some friends there and was playing shows there, because it was so close to San Marcos. The transition was actually very easy and welcoming.

TC: What’s your interpretation of Austin’s scene? Is this still the place to go if you want to be a musician?

RS: There are a lot of ways to look at it. I think it’s difficult in someways to become a musician just based on the competition. There are so many musicians there. But in another way, it’s easy because there are a lot of accommodations for it, because of that reason. I think it’s easier to get a job in Austin than other places, if you’re going to do music on the side. I mean I used to work at Thundercloud Subs for four years and they would always let me tour and stuff when I needed to. I feel like they kind of had to because so many of their employees are musicians. It’s hard and good and bad at the same time, just like anywhere else. I feel like it has its ups and downs.

TC: You signed with Mom & Pop records last year. How have things changed since you did that?

RS: They’ve been hugely helpful in so many ways. Like, just distribution and radio play and getting people out to my shows– word of mouth– using their connections to tell people about me. Pulling things together in a professional way instead of DIY. They’ve also just helped a lot professionally. Like now, during SXSW, or something like that, there were a lot more industry people at my shows, I guess. If I’m playing in New York there’s a lot more buzz. They bring people out to the shows. I don’t know what all goes into the machine of the label—our manager probably has a much better idea about that kind of stuff. I’ve noticed it’s help grow my audience base exponentially. 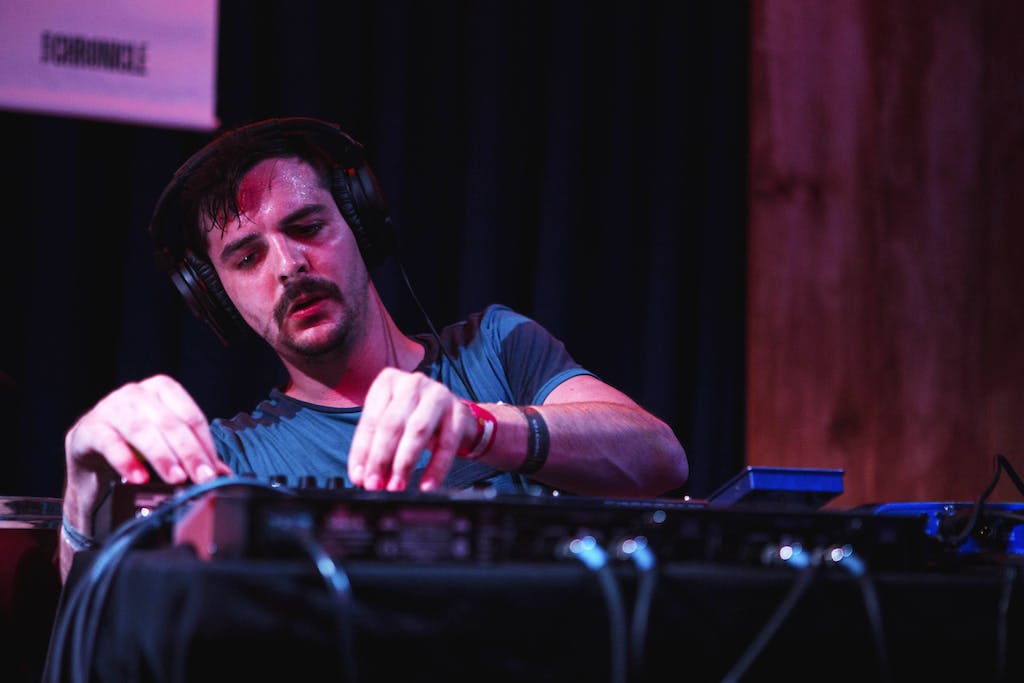 TC: It felt like you rebranded yourself over night. Was that solely your decision?

RS: Yeah. There was a point where my manager and I were talking about rebranding the electronic set. For a long time, I had gone as Roger Sellers and done a lot of folk stuff as well as electronic. People didn’t quite know what to expect, it was confusing. With the electronic stuff, we thought maybe a name change would help. I always wanted to do that anyway, kind of. It seemed like the right move and Mom & Pop was definitely were on board with that, they completely agreed to come out of the gate with a whole new deal.

RS: I was having a really rough time trying to think of a name change. I was thinking too hard about it. I wanted to be sincere, not just a silly name. I grew up [on a street named Bayonne] and I was in Houston recently when I made the decision. I was recording and I looked up and I saw that street sign around the corner. It just felt right, and I knew immediately that’s who I wanted to be. I also think the word’s really pretty. It’s a good sounding word, it looks good.

TC: As of right now, everywhere you go you’re known as an Austin musician. Why not San Marcos or Houston, where you clearly have deep ties?

RS: I don’t know, I guess I never really thought about it. I just went with that. They just said it one day and I went with it. I feel like when it comes to performing live and doing this professionally, Austin’s where I’m from. The music side of me, essentially.

TC: You’ve been growing in popularity pretty quickly lately– why do you think that is? Just hard working paying off or is something changing in the music industry that’s catering to your sound?

RS: I don’t know. I think a lot of it is just being at the right place at the right time. I think this is just a good time to release a record and re-release it. Musically, I think Primitives is a lot more accessible right now than it was two years ago. I think maybe there’s just a right place for it at this time, I don’t know. Kind of hard to tell, it’s kind of a mystery to me.

TC: Visuals used to be a big part of your performance. Has that changed?

RS: I’d say it’s going through a transition. There were a couple of guys that I worked with—one of which is not doing projections anymore—and I feel like that was the big thing. We worked together for like three or four years and visuals really became known at my shows. I definitely think the live element is a huge part of it but I still want to be known as performer and not just as a light show. I’m kind of transitioning toward seeing how that’s going to work out. I want to figure out a way where I can do the lights and also balance it. That’s kind of all being worked out.

TC: Now that Primitives is out for the second time, are you working on any new music? Should we expect anything soon?

RS: Yeah, nothing’s confirmed but I’m probably going to put out something later this year. I’ve just been touring so much, I haven’t had much time to sit down and really think out and put together a whole record or anything. But I’ll definitely be having something coming out this year.