Will Mark Cuban run for president in 2020? “It’s a big decision,” acknowledged the billionaire, Mavericks owner, and Shark Tank judge at The Edge of Texas. “Given the way the political landscape is, what parent in their right mind would want to put an eight, eleven, and fourteen-year-old through that? That’s why I haven’t decided.”

Even if he hasn’t come up with a campaign slogan—yet—the man who famously called Trump a “jagoff” isn’t shy about his policy planks. In a conversation with Texas Monthly executive editor Skip Hollandsworth in front of a standing-room-only crowd, Cuban talked about Roy Moore, our unofficial ambassador to North Korea, and what he does when the Mavericks are bad.

President Cuban Would Be Confident, But Not Too Confident

As for President Trump’s description of Cuban as “an arrogant, crude, dope”? “I am not a dope,” Cuban says with a grin.

Mark Cuban Will Show You His Tax Returns

Anytime, actually. He keeps photos of his 2016 and 2015 tax returns on his phone, just in case anybody asks.

Cuban is no expert on how to navigate North Korea’s nuclear threat, and he’ll own up to it. “If you don’t know shit, don’t say shit,” says the guy who has been fined nearly $2 million by the NBA for shouting at referees.

“The idea of putting up the wall is one of the dumbest ideas I’ve heard in my entire life,” he says. “You pick the least technological solution that’s the easiest to crack, but doesn’t protect us from the thing that we’re at greatest risk for.” Instead, Cuban is focused on cyberterrorism and threats to American infrastructure. “I’m more concerned with bytes than I am with bullets,” he says.

“Do I think climate change is real? I know two and two is four,” says Cuban.

Mark Cuban Doesn’t Have Time for Dealing with Roy Moore

“I would make no effort to talk to Roy Moore, and I wouldn’t tell him anything,” says Cuban. “The job of the president isn’t to pass judgment on everyone. There’s a long list of things to get done, and talking to Roy Moore shouldn’t be in the top 150,000 of them.”

Mark Cuban Would Sell the Mavericks

…but only for a trillion dollars.

Mark Cuban is Inventing His Own Healthcare System

“What the ACA [Affordable Care Act] tried to do was noble, but any healthcare system built on insurance will fail,” Cuban says. “Insurance is a financial instrument, it’s not an instrument for healthcare.” But don’t worry—Cuban’s working on it. Right now, in fact. Earlier this week, he met with healthcare professionals to design a system he calls “self pay guarantee,” which Cuban likens to means-tested government loans for college: “You pay what you can, you borrow the rest.” According to Cuban, both Democrats and Republicans have responded enthusiastically to his plan so far.

Mark Cuban Wants to Do Away with Pharmacies

“Our bodies are basically a math equation: As processors get faster and faster, and our ability to process and artificial intelligence goes further and further, we’ll be able to personalize medicine for each of us,” he says. According to Cuban, over the next fifty years, over-the-counter drugs will become increasingly obsolete.

Mark Cuban Would Say No to the Democratic Party

Even if they asked nicely, he’d refuse to be the Democratic nominee in 2020.

“In my mind, an American citizen has the right to own as many guns as they damn well please,” Cuban says. “When you start getting into automatic weapons, big magazines—those aren’t for self-defense. If you want to own a bazooka and keep it in your house, feel free. Once you walk out that door, you become our problem.”

Mark Cuban Knows How to Deal with Stress

When the Mavs don’t start well, Cuban deals with it—kind of. “I hug my children. I work out a lot more. And I get pissed off,” he says.

“I learned how to be cranky, and I learned that that even 39-year-olds who think they’re eighty can have just an incredible heart,” says Cuban about Mavericks player Dirk Nowitzki. “Putting aside everything on the basketball court, Dirk is still a hero.”

Mark Cuban Knows How to Count His Blessings

How great is it to be a billionaire? “It is so effin’ unbelievably great,” Cuban says.

So, to recap: Cuban is shopping his healthcare plan to politicians on the left and the right, has a long list of what a president ought to get done, and carries around a photo of his tax returns. But he’s almost definitely not running for president in 2020. Well, probably not. 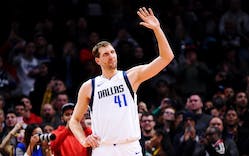 The Best Thing in Texas: The Clippers Gave Dirk Nowitzki a Standing Ovation 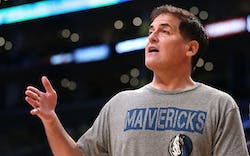 Come Join us at the Edge