With the confidence of a tourist, I happily forked over $2 just to walk down the 1,240-foot Horace Caldwell Pier one blustery morning in Port Aransas, the low-key coastal village on the northern tip of Mustang Island. Most of the other paying customers were attending to fishing setups of varying complexity; one man, who was monitoring six rigs, had built an elaborate sun-blocking lean-to. He told me what he’d been catching—hardheads and gafftops—and what he would rather have been catching: trout, redfish, maybe a tiger shark. (In the sixties, someone caught a tiger shark off this pier that measured thirteen feet seven inches, a record that’s still standing.)

A line went taut nearby, and another fisherman, who resembled a grandfatherly Gilligan in a white bucket hat, reeled in a pair of ten-inch hardhead catfish, posing gamely as I snapped a photo. I noticed that one of the flopping fish still had hold of the large pink shrimp with which it had been hooked, and I thought of my al fresco seafood supper the previous evening at Trout Street Bar and Grill, which involved shoveling fresh shellfish into my own gullet. It was the promise of the same bait that had lured me to Port A.

Whereas South Padre Island, that other popular beach destination, has the ambience of an amusement park, Port Aransas still feels like the isolated fishing hamlet that it once was. For most of recorded history, this barrier sand reef has been sparsely populated, first by Karankawa, then by Spanish explorers and pirates, then by U.S. troops during the Mexican and Civil wars. In its glory days, Port Aransas was the Tarpon Capital of the World, drawing sportsmen—including president Franklin D. Roosevelt—to its shores, though by the mid-sixties the great jumping silver kings had all but disappeared.

Fishing is still the main draw; you can stalk redfish from a flatboat, reel in marlin on a deep-sea excursion, or bait black drum from a kayak, a jetty, or the surf. And afterward, you can tell the tales over beers at the waterside Back Porch Bar, behind Woody’s Sports Center, which welcomes everyone from “beach bums to billionaires”—oh, and non-anglers too.

PLAN A WEEKEND in Port Aransas using the Wanderer’s curated trip guide, with tips on where to stay, what to eat, and what to do.

Port A’s historic slogan, “Where They Bite Every Day,” could just as easily reference the town’s eager tourists. Although I’d planned to take full advantage of the therapeutic beauty of the sea, I had no intention of casting a single line or of catching any of my dinners. Instead, I’d come to revel in the irresistible stew of kitsch and nostalgia that one finds in the souvenir shops and waterfront restaurants, in the dolphin cruises and snow-cone stands, and in the dive bars that open at breakfast. I found myself making decisions—and purchases—based solely on my wistfulness for the family vacations of my youth: a popcorn shrimp salad served in a plastic clam shell at Virginia’s on the Bay, a $5 neon-orange inner tube at Beachmart, a booklet of marine-life temporary tattoos from the Port Aransas Museum gift shop.

Not one but three souvenir shops have erected large replicas of wide-mouthed sharks at their entrances, which some might take as a sign that the town’s embrace of tourists (about five million a year) has, well, jumped the shark. But there are still places that evoke the spirit of a pre–cheesy Port A, be it the weather-worn Tarpon Inn, opened in 1886, where you can peruse the wall of tarpon scales autographed by previous visitors (many of them famous), or Farley Boat Works, a sawdusty workshop established in 1915 that was reopened in 2011 as a “build your own wooden boat” school. 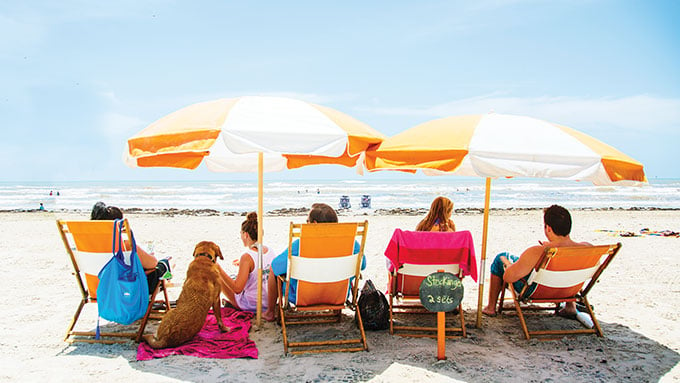 Naturally, there are concerns that Port A has become too charming a getaway, losing its quaintness with every new tidal wave of tourists and at risk of being overrun by the big-box stores, like Walmart, that have begun to sniff around. Year-round residents have been bemoaning this sea change since plans for the first nine-story “high-rise” condo were announced in 1977. Last year the city did rake in a record-breaking $3.5 million in hotel tax revenue. Nevertheless, the city council recently voted for a two-month moratorium on issuing building permits for retail stores larger than 25,000 square feet (it seems that the new Schlitterbahn in nearby Corpus Christi has been bringing more corporate attention Port A’s way too).

From where I sat—mere feet from the surf, under an orange-and-white-striped umbrella, a hardbound copy of Robinson Crusoe in my lap—I understood the reflex to protect Port Aransas’s particular je ne sais quoi. Then again, I’d chosen to rent a condo at Cinnamon Shore. The still-expanding vacation home community is a master-planned, New Urbanism alternative to the funky older rentals that many families loyally return to year after year. But the stretch of beach that I’d claimed just beyond the development’s private boardwalk was noticeably less crowded than the section I’d previously scoped out farther north, near the busy access point at the I.B. Magee Beach Park. With little to distract me, I turned back to my book. I couldn’t help but laugh as I read that even after shipwrecking on a deserted island, Robinson Crusoe still went in search of the remotest part he could find. I could relate.

One of my favorite reasons to escape to Port A, which is still a small town even with the summer swells, is so that I can then escape to San José Island, a.k.a. St. Jo’s. Accessible only by boat, it feels like the private island I’ve long harbored dreams of owning. In reality, someone else owns it: Fort Worth wildcatter Sid Richardson bought the island in 1936 and tasked his young nephew, Perry Bass, with building the ranch house that would eventually host FDR, John Connally, and other bigwigs; the island is still in the family. Because of the Open Beaches Act, its shores are accessible to the public, and thanks to the Jetty Boat, a small passenger ferry that makes ten round-trips daily from Fisherman’s Wharf, anyone can get to this nearly uninhabited paradise in under ten minutes, as I did one morning.

I set up my picnic near the huge pink-granite rocks of the North Jetty, where the serious anglers congregate, but because St. Jo’s is 21 miles long, I could have wandered far enough to eventually lose sight of everyone else. I didn’t have to travel a great distance, however, to pluck from the sand a bounty of lightning whelks and sand dollars, nature’s best souvenirs. You can camp overnight, but by the end of the day, I was ready to be back in Port Aransas, floating in my $5 inner tube in one of Cinnamon Shore’s saltwater pools or partaking in the fried comforts of a shrimp platter until I had to return to my real life, too far away from the sea.