Not much is off-limits for Demi Lovato. Between seven albums and three documentaries, the Dallas-raised musician has bared her soul, sharing her struggles with addiction, eating disorders, and depression. Her story is imperfect and often messy, as her audience has had to learn the hard way. Even when Lovato seems like she’s laying all of her cards out on the table, she has a great poker face, and a knack for keeping the darkest parts of herself hidden.

The way Lovato tells her story changed with her recent docuseries, Demi Lovato: Dancing with the Devil, in which the singer talks candidly about the downward spiral that preceded her near-fatal overdose in 2018. In a series of interviews, her friends and relatives confirm that Lovato has always been good at hiding the warning signs that might tip them off to a relapse.

To the outside world, Lovato was six years sober, and a role model for millions of fans who admired how open she was about her mental health. But the mounting pressure of worldwide tours and the perception of her as a poster child for sobriety was getting to be too much. She convinced her friends that she could handle drinking, but privately, she’d started using heroin and crack cocaine.

On the docuseries’ accompanying album, Dancing with the Devil . . . the Art of Starting Over, Lovato embraces that same level of radical honesty. Across nineteen tracks, she guides listeners through the wild ride that’s made up the last three years of her life. From her relapse, to her overdose, to her breakup and the complete transformation that followed, Lovato seems ready to show everyone who she is today; ready to finally let go of who she was. And she doesn’t gloss over the mistakes she made along the way.

Lovato’s superpower has always been her voice. On a technical level, she has an impressive, four-octave vocal range, and an exacting precision that lets some notes resonate deep in her chest, and others soar to dizzying heights. More broadly, though, Lovato has always had something to say when she sings.

Sure, it’s easy to see through the picture-perfect image that Lovato and her fellow former Disney stars delivered in the late 2000s. But even by child-star standards, Lovato was dealing with more than most when she was sucked into the Hollywood machine. Her biological father struggled with alcoholism and drug addiction, and she developed an eating disorder in her preteen years. When she was fifteen, Lovato says in the docuseries, she lost her virginity in a sexual assault to an unnamed costar who was never punished. In 2008, on her debut album, she sings, “It’s amazing what you can hide / Just by putting on a smile.” 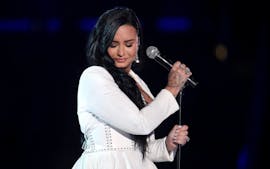 Who Is Demi Lovato’s Honesty For?

It isn’t as if contemporaries like Miley Cyrus or Selena Gomez haven’t written songs about messy breakups and heartbreak. They’ve made references and veiled allusions to their missteps (and they don’t owe us any more than that), but Lovato doesn’t have the same inclination to shy away from her trauma. Instead, her instinct has always been to explore her pain and share it with the world. Not just to correct the narrative, or share the story on her own terms, but also to understand it herself.

Dancing with the Devil opens with “Anyone,” a sweeping confessional recorded four days before her overdose. With heartbreaking clarity, she lists failed attempt after failed attempt she made to get better before begging, “Please send me anyone / Lord, is there anyone? / I need someone.”

You can hear her pain in the song—a literal cry for help that went unanswered. The second track, “Dancing with the Devil,” is a dark, anthemic retelling of Lovato’s slow descent into relapse. Each verse builds carefully, mimicking every small decision that led to her overdose. In the first line, she rationalizes drinking “a little red wine,” which later progresses to “a little white line”, and “soon that little white line is a little glass pipe.”

The first four tracks of the album serve as a first act. They address Lovato’s past so that she can move forward. In the spoken interlude, “Intro,” she says, “Let me take you on a journey. One that sheds the skin of my past, and embodies the person I am today.” This is her metamorphosis, an acknowledgement of pain she’s felt and pain she’s caused, but ultimately, a transition into something beautiful and new.

You can hear Lovato come into her own as she sings “The Art of Starting Over,” a glittering track accented by the singer’s staccato delivery as she rewrites the ending to her story. Toward the end of the album, she addresses her sobriety in “California Sober”—a reference to her controversial approach to recovery, in which she still drinks and smokes marijuana in moderation. It’s a questionable method, but one that Lovato has fully embraced in spite of the judgment she knows she’ll receive. Her confidence on these tracks is a balm for the harder moments in which her vulnerability shines through.

“The Way You Don’t Look at Me” is a crushing track that dives into Lovato’s eating disorder and her battle for self-confidence. Over jangling guitars, she admits, “I’m so scared if I undress that you won’t love me after.” It’s a simple, brutal line delivered almost in passing. Later, Lovato sings with Sam Fischer in “What Other People Say”—a meditation on regret. Together, the duo trade verses and apologize to their younger selves for the mistakes they’ve made.

In between the trauma, Lovato also finds moments of joy. She celebrates the girlfriends who have always been there for her in “My Girlfriends Are My Boyfriend,” a “chicks over dicks” anthem featuring rapper Saweetie. And in “The Kind of Lover I Am,” Lovato builds herself up and revels in her self-assuredness over breathy, echoing vocals as she sings, “Doesn’t matter, you’re a woman or a man / That’s the kind of lover I am.”

Her dark sense of humor is on full display in “Lonely People” and “Melon Cake.” The former is a fun, bitter song in which Lovato reflects on doomed relationships before landing on the ultimate truth: “We all die alone / So you better love yourself before you go.” The candy-coated, pop-punk track is such a natural fit for Lovato’s voice that it’s criminal there isn’t more of it on the rest of Dancing with the Devil.

“Melon Cake,” meanwhile, is an eighties-influenced diss to her former management. In her recent docuseries, Lovato spoke about how her former team’s method of managing her sobriety and her eating disorder was to control every aspect of her life, monitoring what food the people around her ate, and not letting certain friends see her if they weren’t completely sober. For several birthdays, she wasn’t even allowed to have a cake. Instead, they gave her a watermelon with fat-free whipped cream.

With new management and a newfound control over her life, Lovato basks in her freedom as she celebrates, “No more melon cakes on birthdays . . . Finally get to do things my way.” At one point, she addresses her younger self again when she sings, “I’m sorry that it took so long / But baby, you’re free.”

Her relationship with ex-fiancé Max Ehrich makes its way onto the album as well. The track “15 Minutes” is an angry send-off to Ehrich, whom she split from in September of 2020. Lovato snarls and even laughs at his attempts to use their relationship for his own fame.

Over the course of the album, she dips in and out of various genres, expertly slipping in R&B-tinged vocal runs, twangy steel guitars, bright yacht-rock backing tracks, and soulful ballads. She makes it seem easy, even when the lyrics themselves are a bit harder to swallow.

Dancing with the Devil is as imperfect and messy as the mega-talented artist behind it. It’s a long album, one that isn’t as radio-heavy as her previous ones, but that hardly matters when it feels the most authentic. After years of restricting herself, Lovato’s earned the right to indulge a little.

She tells a complete story, a redemption arc that begins with a cry for help and ends with Lovato arriving at a “Good Place.” She’s burned her past to the ground to build something new, honest, and hopeful. And after the past year, if there’s anything that Lovato—and the rest of us—have earned, it’s a little bit of hope.

Who Is Demi Lovato’s Honesty For?