In the East Texas town of Douglass, they’re giving Tomball’s Tejas Chocolate & Barbecue a run for its money at Uncle Doug’s, where they smoke meat and make bean-to-bar chocolate.

The author provides little evidence for his conclusion that American barbecue was simply appropriated from Native American cooking:

By the time of the Texas annexation in 1845, the smell of barbecued meat had become as familiar a feature of pioneer towns as tumbleweed and dust.

The history of the Barbecue, from our August issue:https://t.co/7dKCvKLe3I

Emma Heim of Fort Worth’s Heim BBQ told Cowboys and Indians magazine that they cooked 24 tons of bacon burnt ends at the restaurant in 2018.

“Modest barbecue at modest prices” doesn’t sound like a mission statement, but that’s how the Dallas Observer described the new Austin’s BBQ in Addison.

“That’s a Church I can get behind.”

Guess Family Barbecue has been making extensive renovations to the former Michna’s Barbecue location in Waco and will open next month.

LeRoy & Lewis has organized its first Pitmaster’s Potluck in Austin on September 8, bringing together barbecue talent from across the state.

Tickets are on sale for Southern Smoke, which is firing up in Houston on October 6.

Witness to the conversion:

For this week’s @nytimes @nytfood I wrote about vegetarians who have become ethical butchers, and why they made that choice. https://t.co/18FWzcUBiF

Thrillist provided its list of the 33 best barbecue joints in the U.S. They’re not all in Texas, but the vast majority are serving Texas-style barbecue.

Rob Balon touts the superiority of Austin’s barbecue over barbecue found just about anywhere else.

The State Fair of Texas is coming soon, and the finalists have been announced for the Big Tex Choice awards for the best fair foods. There’s more than a little brisket in the mix.

I ate a lot of ribs down in Alabama while working on this year's soon-to-be-launched @Southern_Living Top 50 BBQ Joints in the South list. I was pretty impressed. https://t.co/Oon2lPo0I2

Michael McCreight of Victoria suffers from damage done by a grill brush bristle he ingested five years ago.

Texas barbecue has been able to steer clear of the political culture wars, but the San Antonio-based Bill Miller Bar-B-Q chain is now at the epicenter.

The Bexar County Democratic Party considered a Bill Miller boycott but decided “it would be more productive to reach out and talk to each other rather than call for boycotts.”

“The most important thing about barbecue is sauce.” – Governor Greg Abbott in 2015

One of our 25 best new barbecue joints, Reveille Barbecue Co. in Magnolia, is closed until further notice.

J.C. Reid of the Houston Chronicle described smoked turkey as the “Swiss Army knife of the barbecue menu.”

Houston Food Finder was on the lookout for creative barbecue in Houston, and they recommend nine stops.

The Houston Press calls Pappas Delta Blues Smokehouse in Webster “one of the finest smoked meat establishments in and of Houston.”

B’s Cracklin’ BBQ is eyeing Charlotte for a new location:

Star pitmaster Bryan Furman has returned, and @KathleenPurvis caught up with the West Meck grad about his journey to international fame—and his plans for Charlotte: https://t.co/eOFW9KCKMF

Rodney Scott has two whole-hog barbecue joints in South Carolina and one in Birmingham, Alabama. Now he’s announced an upcoming location in Atlanta.

Larry Olmsted of USA Today was far more impressed with Raleigh’s Clyde Cooper’s BBQ, the oldest barbecue joint in North Carolina, than I was.

Food & Wine calls the barbecue at MELT in Paris (France) “far better than some barbecue-style menus in New York.”

Tragic, but don’t blame the brisket: 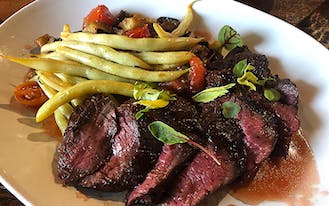 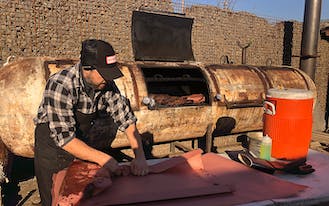