Brisket Love Barbecue & Icehouse is just over a mile off Interstate 20, yet it feels secluded in the woods of East Texas. Owners Craig and Lee Ann Wood chose the location, a former catfish house, because it sits between two Smith County communities from which to draw business. One is Hideaway, and the other is Lindale, where Craig is a fifth-generation resident. He previously ran a lawn care company for 24 years, but decided to jump into the barbecue business in a big way earlier this year.

Brisket Love’s building is enormous. It’s a barbecue joint, a bar, and a live music venue. There’s even a beer garden out back. Wood books live acts every weekend and a few during the week as well, but the barbecue is served Tuesday through Sunday. He knows the place is massive, especially for a first restaurant venture. “I kinda do everything opposite,” he joked, adding, “I’m working on a food truck now.”

On a Tuesday at opening time, the place was empty, but a short line had formed by the time I left at noon. Busy or not, the service was attentive, and two women working the cutting block showed an extra level of care with the meat. Slices of brisket are taken from the block and wrapped in foil before they go on the tray. This kept the brisket moist until I got to the table. A vat of melted butter and chicken stock stays warm on the hot line, and they asked if I’d like my smoked turkey slices dipped in it before being plated. Of course I would.

A generously portioned four-meat plate with two sides was just $21, and there wasn’t a dud on the tray. The pork ribs had a brown sugar sweetness and perfect tenderness, and were incredibly juicy. The turkey didn’t need the butter, but it also didn’t hurt. Wood makes two kinds of sausage, a jalapeño and a black pepper version. I had the latter, which was a well-made link. Wood said he’s still trying to perfect the process. “I’d never done that before we opened the restaurant,” he said of the sausage-making.

He’s got much more experience with brisket. “I’ve cooked barbecue in my backyard for what seems like all my life. Even before high school, I started dabbling,” he told me. It’s evident in the Prime-grade beef. A great bark with just a whiff of black pepper surrounded each slice. The fat on the edge of the lean brisket was buttery soft, and every slice was incredibly moist. That foil wrap after slicing did the trick. The restaurant’s namesake cut is indeed treated with love.

Maverick and Goose are on display on a flat-screen monitor visible from the ordering line. They’re a pair of thousand-gallon offset smokers built by East Texas Smokers. Wood says they’re the same design as those in Truth Barbecue’s pit room in Houston. Wood has some help running the pits from his son, Hunter Wood, and Bailey McWhorter. She worked at Joseph’s Riverport Bar-B-Cue and Lockhart Smokehouse previously and is responsible for developing specials like the Dr Pepper burnt ends and the brisket cheesesteak. The latter is a clever way to use leftover brisket. It’s sliced thin and added to sautéed peppers and onions before being topped with queso. It’s one of the many sandwich specials they offer throughout the week at Brisket Love.

The sides get plenty of love too. Onion rings are hand-battered and fried fresh to order. A lighter touch from the salt shaker would serve them well. Chunks of new potatoes, rather than slices, are the base of the best German potato salad I’ve eaten. The recipe is Wood’s, and he mixes two kinds of vinegar, salt, sugar, green and white onions, and parsley into the dressing. The pinto beans are scratch-made and have a good bit of leftover barbecue in them. Wood insists on serving only freshly smoked barbecue daily. He even smokes two batches so you’re not getting lunchtime brisket for dinner.

The day I visited Brisket Love was the first day Wood had taken off in the joint’s first hundred days of business. He certainly thinks he made the right decision to take on a career in barbecue, but he had his doubts in the beginning. “After the first two weeks, I wanted to put chains on the door,” he said. They were swamped, and Wood admitted, “it just about killed me.” It looks like he’ll stick around, and given the quality of the barbecue, Lindale will be the beneficiary. East Texas has added yet another barbecue destination. 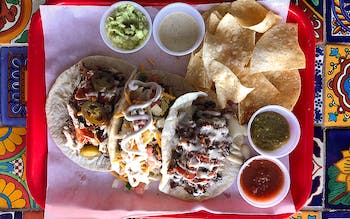 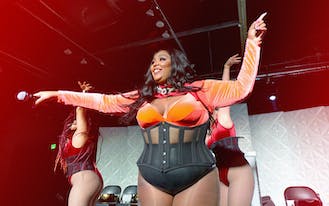