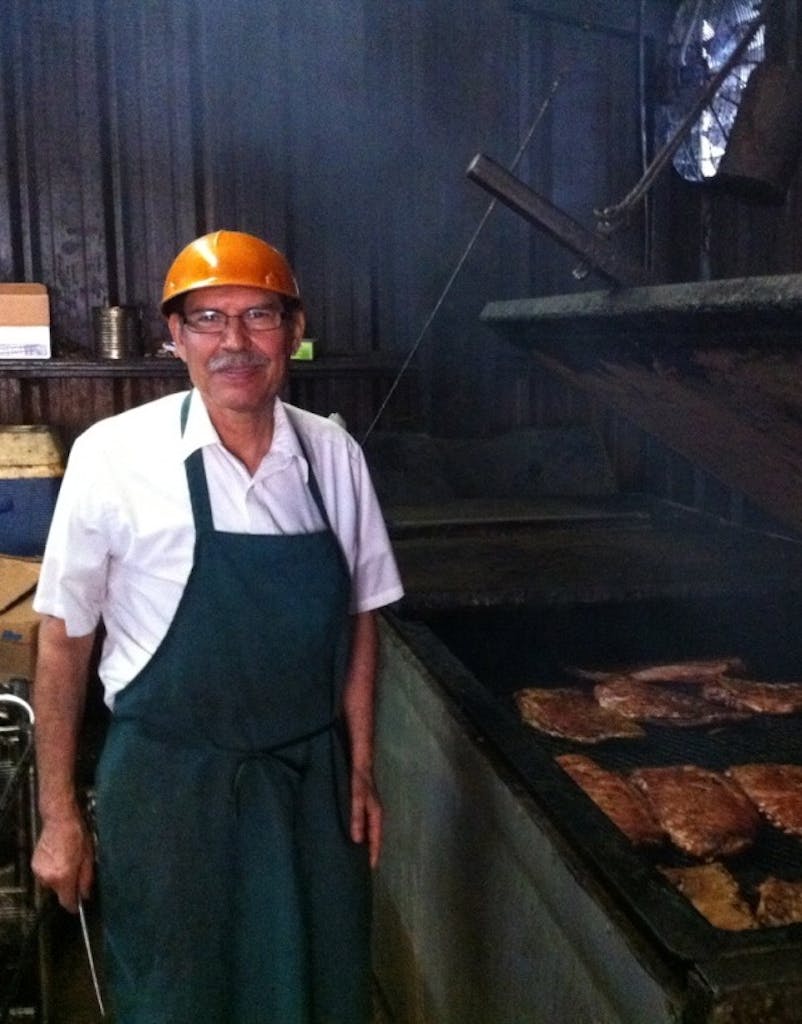 If you’ve been to City Market in Luling, chances are you’ve seen the hard-hat clad Joe Capello. If their doors are open, then he’s probably there working the pit like he’s done for the last few decades. Other than a couple of years in the Army, Joe has lived in Lockhart, Texas. For more than half that time his paycheck has come from City Market. He is a modest man of few words, but he was willing to share a brief break at from the pits with us. Here he provides the story behind the hard hat, a little Luling history, and an explanation for that new gas rotisserie in the pit room.

Daniel Vaughn: When did you start working for City Market?

DV: Had you worked at any other barbecue joint before then?

JC: I worked a little bit at Kreuz and at Black’s.

DV: So, you worked in Lockhart before heading down to Luling. Did you work the pits at either one?

JC: At Kreuz I used to clean tables in the summertime. I was real young. My brother used to work there, so he got me in. I think I worked there for maybe a month. At Black’s I worked at the meat market. It was called Northside Market then. I was a butcher.

DV: When was that?

JC: I was out of high school. I guess you could say I was in between jobs. I had been working in Luling, but I lived in Lockhart. My car broke down, so I couldn’t get over here. I started there at Northside Market working at the meat department.

DV: Was that your original trade? Cutting meat?

JC: Yeah, you could say that.

DV: Did you make it back to Luling after you got your car fixed?

JC: When I was at Northside Market I got drafted into the Army. I spent two years in the Army. When I got out I went back to Northside, but they weren’t hiring. I had a car by then, so I came back to Luling. That was in ’69. There were just no jobs around.

DV: Were you looking for a butchering job, a barbecue job, or just any job?

JC: Just anything. My girlfriend had been waiting for me to get home to get married, but I couldn’t get married without a job. I had to take whatever was available. I had kept in touch with the owners of City Market while I was in the Army.

DV: Who was the owner at the time?

JC: Lanos and Howard Ellis were brothers and they owned it. They came over from Kreuz.

DV: Really? Were they butchers or barbecue men?

JC: Howard was the barbecue guy and Lanos ran the business.

DV: When you came back there to work, what was City Market like? Did it still have a meat market component?

JC: The front end of the store was a meat market and the back was the barbecue place.

DV: In the same spot where you order the barbecue now?

DV: And the front was full of meat cases?

JC: There was a meat case with a butcher block. We had some meat on display. If they needed a special cut, we’d go in the back and cut it.

DV: The sign above City Market reads “Bar-E” which is a ranch that the original owners owned. Was the meat in those days coming from the Bar-E Ranch?

JC: No. Most of it was brought from a packing house.

DV: At one point was City Market using meat from the ranch?

JC: Yes. Some of it was slaughtered in the slaughterhouse in Luling and brought directly over from the market.

DV: When you got hired back in ’69, was it as a butcher or for the barbecue?

DV: What got you transitioned to doing barbecue full time?

JC: Well, Howard Ellis was my bossman’s uncle. He was the pitmaster. I was always watching him do it. He got sick and had to retire. Bossman said “it’s yours. Time to take over.” I had just been watching. I hadn’t really experienced the cooking. It was a learning experience as I went along.

DV: That had to be a scary moment.

JC: Yeah. It was a little scary.

DV: When did that transition happen?

JC: I started the pits in the eighties.

DV: That’s a long time to work at any job, let alone working the pits.

JC: It’s been quite a journey.

DV: Have you ever thought about doing anything else?

DV: Was there a lot of local competition for barbecue back when you started?

JC: Actually, there were four barbecue houses here at that time.

DV: Do you know what happened to any of those places? Was there not enough local demand for barbecue?

JC: They were mom and pop shops, and when they decided they didn’t want to work it anymore, the offspring weren’t interested. It kinda went by the wayside.

DV: How have you seen the town change since you’ve been there?

JC: During the oil boom we had all kinds of oil companies here. When oil went down to $10 a barrel everybody started leaving town. I don’t think the population has gone up since then.

DV: When you were cooking back then, was it brisket or another cut that you were serving?

JC: We would buy the whole calf, so that’s what we would cook. We weren’t buying any packaged meat. They’d slaughter a calf and they’d bring the hind and forequarters into the market. Half of it was for the meat counter and half was for the barbecue pit. The hindquarters were cut up for the meat counter – the rounds and the T-bones. The forequarter was cut up to barbecue – the brisket, the short ribs and the shoulder clod.

DV: Was it sold as separate cuts on the menu, or was it just sold as barbecue beef?

DV: Did the meat market handle pork as well as beef?

JC: It was all beef then.

DV: I’m guessing that has something to do with your all beef sausage recipe now?

JC: Yeah. All the trimmings from the steaks and stuff would go into making the sausage.

DV: Is it all beef these days?

JC: No. Now we’ve got the pork ribs, so the trimmings from the ribs go into the sausage now. That makes it about 95% beef and 5% pork. We tell them it’s beef sausage, but it still has a little pork in it.

DV: That yellow sauce you have is pretty famous. Whose recipe is that?

DV: When was that introduced?

JC: It was around from the very beginning when they opened. They started with that barbecue sauce.

DV: There’s another sauce that is used on the ribs that is different. Is that your recipe?

JC: I came up with that. It’s basically the same ingredients. It’s thicker.

DV: I noticed your ribs have a deep saltiness to them. Are they seasoned the night before?

DV: What’s in the rub, unless it’s a secret?

DV: There’s a place in Houston called Luling City Market that creates some confusion. Have you had any problems with people thinking your business is related to theirs?

JC: Oh man. That thing in Houston is kinda messed up. They have a website, so people order from their website, then come over here to Luling to pick up their order. They think it’s us. There was a wedding. They came in here and said they were here for a big order, but we didn’t have any order. They then realized they placed it in Houston.

DV: That had to be an uncomfortable moment.

JC: Of course we’re always able to fill the orders, including that one. I don’t know if they had to prepay or what kind of deal they had to work with.

DV: You said before that you live in Lockhart. Do you ever eat any of the barbecue there?

DV: Do you ever eat any barbecue outside of City Market?

JC: No. I don’t ever try anyone else’s barbecue.

DV: Do you cook barbecue at home?

DV: I guess you get enough at work.

DV: What do you prefer when you’re not eating barbecue?

JC: Tacos and enchiladas or a good hamburger.

DV: Every photo I’ve seen of you includes that hard hat. Where did it come from, and why do you wear it?

JC: That was given to me by Delma. She came up here one day and said “I want you to wear this.” I didn’t know what the idea was, but I wore it anyway. I’ve worn it ever since. Sometimes I hit my head on that lid on the smoker, so it’s come in handy.

DV: When do you normally get into the market to start cooking?

JC: I get here a little before six to light the pits. I put on the ribs and start heating up the sausage. I put on a few briskets too. I have some of those going overnight that are already started. I don’t leave until about 6:30 at night. I do that six days a week.

JC: People still ask us to open on Sundays. I just grin at them. I don’t want to go into an explanation.

DV: Something that makes City Market unique is that you still have just three barbecue items. Brisket, pork ribs, and sausage. Have you ever considered adding more meats?

JC: No. We think about adding chicken sometimes, but it takes up so much room. We’ve decided against it.

JC: I’ve got a few more years in me. I’m trying to analyze to see who might take over. I’m not going to do it like my bossman did. Back then we sold about 10% of the barbecue we sell now. We’re busy all day long on Thursday, Friday and Saturday.

DV: Nowadays you have a Southern Pride rotisserie. That has created some discussion since you’re no longer using just the brick pits. What are your thoughts on that?

JC: It makes it easier because we can start it there before bringing it over to the other pit. It might give it a little different taste, but if it wasn’t for that I don’t think we could keep up. It gives us a big head start.

DV: So you use the rotisserie overnight then finish them on the brick pit in the morning?

JC: Yes. We put them on the rotisserie when we close, then on the other pit in the morning. They’re ready to go at about 10:00.

DV: Thank you for the long years and long hours you’ve worked to keep a great place like City Market operating so the rest of us can enjoy it.

JC: Sometimes it gets hard, but you just get up the next day and do it again. It’s been good.